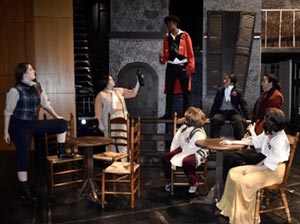 The ultimate tale of redemption, love, and loss comes to life on a high school stage. The students of Moore High School Fine Arts department present Les Misérables, known colloquially as Les Mis. Les Mis tells the story of Jean Valjean, an escaped convict who vows to rebuild himself. In the shadow of guilt and the French Revolution, Valjean’s story is a bleak one. Based on the epic historical novel by Victor Hugo, Les Mis was adapted into a musical for the stage and debuted in Paris in 1980. It remains the longest-running production in London’s West End, having ended its 34 year run in July of this year. A 2014 Broadway revival ran for two years, closing in 2016. It’s currently touring both the U.S. and Europe. It’s safe to say there will never be a world without Les Mis.

However, it’s not always easy to come by. As a theatre reviewer, my goal is not just to see all the theatre that I can, but also to make an effort to see iconic, synonymous musicals- those theatrical experiences that define and shape the very idea of theatre itself. Les Mis is essential for theatre-going, and I had never seen it. Luckily for me, when I discovered the School Edition would be produced by the local high school in my community, I knew it was the perfect opportunity to get my feet wet and finally get to experience Les Mis.

The School Edition of Les Mis sounds like a cop-out. It’s not. It’s not dumbed down, but merely adjusted for vocal capabilities of high school students, and shortened for manageable school-play run times. What’s still in place is the intensity of the story and the heartbreak of the characters.

Dylan Fikes is Jean Valjean, and he’s a solid performer. He carries Valjean’s heartbreak, portraying Valjean as the broken man he is. Fikes sings well, a feat for a two and a half-hour show, and particularly for one like Les Mis, which is entirely sung-through.

Nicholas Tran is Javert, the policeman who knows the secret of Valjean’s true identity. They’re enemies to the very end. Tran gives a strong performance, complete with a shocking and impressive exit. Olivia Sorensen is Fantine. Valjean makes a promise to her on her deathbed, and both actors are very present in this moment. Fikes and Sorensen sing with emotion and loss, pulling at heartstrings. Sorenson is superb during Fantine’s lament “I Dreamed a Dream”.

Miki Beagle and Jaidyn Holtzclaw are great as Thenardier and Madame Thenardier. The pair are innkeepers, a married couple set on swindling anyone out of anything they can get their hands on. They’re true villains. Beagle and Holtzclaw are lively and sinister. The worst thievery they’ve committed is robbing young Cosette of a childhood. They’ve put her to work as a slave when they were supposed to be caring for her. Valjean pays them off, taking Cosette away from them and caring for her, like he promised her mother.

Cosette is portrayed by Elaina Lanthripe and she too has an impressive singing voice. She’s gentle as Cosette, a pure-hearted maiden who’s grown up with nobody who truly loves her. Valjean’s charge, and only hope of salvation, is with her. Raising her as his own, Valjean begins to redeem himself, and Cosette becomes a lovely young woman. 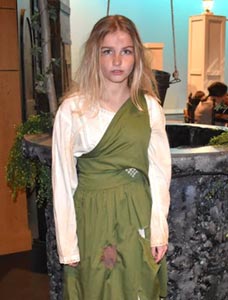 Not so lucky is Eponine, the daughter of Thenardier and Madame Thenardier. Eponine is portrayed by Jacey Olson, and she’s perhaps the most tragic of them all. Olson performs beautifully, singing her stirring musical numbers with sorrow and lingering hope. “On My Own” is a standout moment for Olson, followed in turn by the heartrending “A Little Fall of Rain”.

Keon Awopeju is bold as Enjorlas. He rallies a group of students to battle, and the Revolutionaries form a barricade. Sequestered against an ensuing army, their resolve starts to wane. Seth Lancaster is Marius, Eponine’s friend and Cosette’s true love. Valjean risks everything to save Marius, leaving Marius alive but scarred with deep remorse and guilt. Lancaster shines during his duet with Olson, and during his solo number “Empty Chairs at Empty Tables”. And Katie Ryan as little Gavroche, a street-smart, wise cracking urchin, serves to remind that when grown men fight, it’s the children who suffer.

Les Mis is an epic story, and it’s quite the undertaking for a high school to take on. Kudos to the Moore High Fine arts department for giving their students meaty roles to cut their acting teeth on, not shying away from the harshest of tales, and for braving a fully sung through Tony Award winning musical. Surely as the years go by and these students continue to grow and develop their skills, they’ll remember the bravery and work ethic they utilized during this production of Les Mis, and they’ll feel a sense of pride.