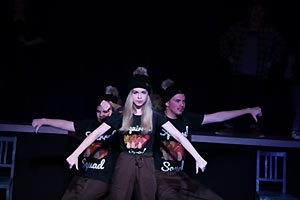 The Squirrel Chorus of Squirrel Girl Goes to College.

The Thelma Gaylord Academy presents a fun set of One Act plays. Marvel Spotlight features superheroes, both known and somewhat unknown, in a new light. In Hammered: A Thor and Loki Play, a teenaged Thor is facing his exams. Not one to make things easy on him, Loki gets up to his usual antics and tricks Thor into getting, well, hammered. In Squirrel Girl Goes to College, a young Doreen Green is just trying to live a normal life and make normal friends, despite the ever-present Doctor Doom trying to ruin things.

In Act I, Briam Zuniga is the older Thor, reminiscing on his younger days. Delaney Horton is Atli/Cul, Eleanor Harris is Hogun, Elissa Marks is Frigg/Hoenir, Erin Thompson is Ellisiv/Heimdall, Ethan Wells is Fandral/Forseti, Kinley Sharp is Freyja, and Mary Brockhaus is the Yearbook Editor and Sif. Megan Gilbert is The Herald, Reece McAbee is the young Thor, Saxon Neal is Volstagg, and Wes Washburn is Loki.

Act II features Eleanor Harris as Doreen Green/Squirrel Girl, Zuniga as Tomas, Horton as Nancy, Marks as the pet Squirrel Tippy Toe, Thompson as The Freak, and Wells as Doctor Doom. Sharp is Smartnoggin, Brockhaus is Professor Brightmind, and Gilbert, McAbee and Washburn make up the Squirrel Chorus. Neal is MODOC.

What a fun set of stories! The Lyric Academy students easily switch from principal roles in Act I to the ensemble in Act II, or vice versa. They work as a team to tell these irreverent and fun Marvel stories about young superheroes before they were anything more than kids themselves. The crowd-pleasing antics of Thor and Loki have the audience tickled. The dynamic between the two brothers is one of warm rivalry. McAbee and Washburn are having too much fun in these roles, and who wouldn’t want to play a Hammer Wielding High school Thor in a denim jacket, or a slick-haired young Loki with angst and a twinkling bit of mischief. 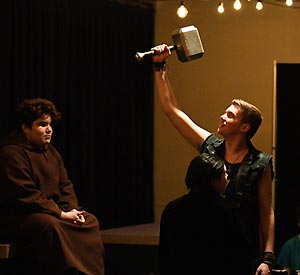 Briam Zuniga and Reece McAbee in Hammered: A Thor and Loki Play.

The same goes for Harris as Doreen. A lesser-known superhero, Squirrel Girl is quirky and nerdy, a smart young lady with a love for education and all things squirrelly. Her loyal team of pet rodents who follow her around are her friends and also the voices of reason in this zany play. Harris is lively and chipper, a relatable young heroine.

The Academy students, directed by Nicholas Bartell, create a fun, happy go lucky set of stories in these Marvel tales. Several things are important to point out here. First, it’s important that not every production is large and sumptuous or on a big, lofty mainstage. Students need to learn how to develop a character and a story mere inches from their audience, in smaller studio spaces and intimate settings. That’s an important part of live theatre, and the students handle that aspect well. Being able to reach out and touch an audience is a part of the craft of acting. Being aware that the audience is there but not letting that thought interrupt your process is harder than it sounds, and this is a good opportunity for talented students to hone that skill. 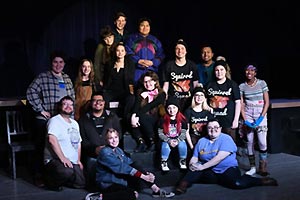 Cast and Crew of The Lyric Academy’s Marvel Spotlight.

Another important factor is that of a non-musical play. Musicals are big, sweeping, and often overwhelming, not just for performers but for patrons as well. Plays are ESSENTIAL in developing acting skills. What a perfect way to delve into the world of acting with familiar, largely developed characters. The characters are grand scale already. The actors give them their own twists and create their own version of the Marvel universe. Once again, the Lyric Academy creates relatable, relevant theatre for kids and adults, and it’s a great time for all.