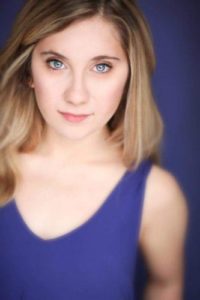 Oklahoma City based artist Kristin Küns just closed out a hit run as Cheryl, the un-dead younger sister of Ashley Williams in The Pollard’s revival production of Evil Dead: The Musical. Evil Dead is a crowd pleasing bloodbath, complete with lowbrow, hilariously frightening humor throughout. The energy of a show this physical is so demanding and constant, it takes a performer as professional and energetic as Küns to pull it off! She was gracious enough to answer my questions about the show, and fill me in on her education and career in a recent interview.

OKASH: Let’s talk about your recent stint as Cheryl in Evil Dead! What was particularly fun about that role? What was challenging?

Küns: Wow, this role is unlike any other that I’ve played before. With playing Cheryl came a lot of firsts and personal records. To give you some context, when I was cast in Evil Dead, I had just wrapped up a year-long children’s theatre contract, so I was intrigued by the idea of doing something goofy and unorthodox. That’s my favorite thing when going from one project to the next – I love the projects to be as contrasting as possible. This is also the case with an upcoming role of mine.

I appreciate Cheryl, because she takes all those quirky aspects of me and my “type”, and then she completely transforms. I think she’s a hero, in her own right, because she is such a strong female character. Of course, she’s evil, so that ultimately leads to her demise, and we love every minute of it. Vocally, she challenged me, and helped me reach new heights, as well.

OKASH: OKC boasts a tight-knit, yet very busy, theatre scene. What do you love most about working and performing in the OKC theatre community?

Küns: There’s a lot of support in this community. I love that no matter where I am – whether it’s going to an audition, ushering a show, or seeing a show, or just having a night out with friends, I usually end up running into someone I know from the theatre community. Then it’s often a big hug-fest. This is a tough business, so it’s very satisfying to see my friends be successful. And I think that we are all able to celebrate in each other’s successes, on some level, in my opinion. This is isn’t a competition, but rather, feels like one giant artist’s canvas.

OKASH: What is your DREAM role?

Küns: OOH, that’s a tough one. It’s probably a three-way tie between Molly in Peter and the Star Catcher, Isabella in Measure for Measure and Wendla in Spring Awakening.

OKASH: What is one piece of advice you would give to aspiring performers?

Küns: I like to refer to a Samuel Beckett quote. This is one that a professor of mine shared with my class, and it’s stuck with me ever since. “Ever tried? Ever failed? No matter – keep trying. Keep failing. Fail better.” The “Nos” are generally going to be much more abundant than the “Yeses.” What’s important to keep in mind is that you are enough. You, as an artist and human being, have something that only you can bring to the world. That doesn’t always mean you will get the job, but as long as you have the security of knowing who you are and what you bring to the table, then you don’t truly fail – you learn. Keep finding ways to improve your craft, and “fail better.”

Küns elaborates on the education program she graduated from, saying “I graduated from Oklahoma City University’s School of Theatre, with a Bachelor of Fine Arts in Acting. The training was all classically-based, which I’ve found is also a solid foundation for musical theatre and contemporary styles. It was during my time at OCU that I fell in love with Shakespeare, and went on to study abroad during one summer, with a small group, led by my mentor, D. Lance Marsh. College is where I also discovered my love for Children’s Theatre, and I have the incomparable Judy Palladino to thank for teaching me everything I know about what goes into giving young people the theatre they deserve.”

Thank you so much to the uniquely talented, effervescent Ms. Küns for the exclusive interview! Check back here often as we follow along and see all the great things she will do in the wonderful world of OKC theatre!

Posted in Features, 2019, Who's Who in OK, This Season | Tagged Artist Spotlight, interview
Search
Categories