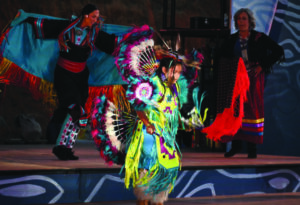 The story follows Waters, a young lawyer who has returned to the Montana home of his youth on the Blackfeet reservation.  He has found a money-making opportunity for the tribe with a land deal, but it may not be the sort of advantageous event for the tribe on all levels.   Darrell Waters becomes reacquainted with his past and the friends of his youth.  He also meets his father, White Feather, after an estrangement of from his childhood.

He rediscovers his youthful dreams, and the dreams of his father and learns the best way to help the tribe in this heartwarming journey.

It is fun to listen to the songs with the flavor of Native American elements in pop and show tune flavor, but it is far more delightful to watch the dancers perform their traditional dances to the drumming.

“Distant Thunder” is a simple story yet a very complicated show blending the traditional Native American Philosophy with modern concepts and striking a balance.  The Taylor-Corbett team accomplishes this with smoothly effortless dialogue.  And then the Taylor-Corbett/Wiseman team continues with the music.  With Lynne Taylor-Corbett directing and son Shaun performing the lead role, the approach is undiluted.  However, “Distant Thunder” is not just a vehicle for the select  group that has been such a part of the show from first idea to finish.  The performers and crew have made the show their own performing with idealism and conviction. 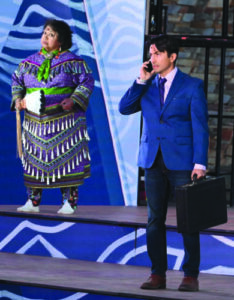 The large completely Native American cast is headed by Shaun Taylor-Corbett as Darrell Waters and Angela Gomez as reservation school teacher Dorothy Dark Eyes.  The two have excellent chemistry and quickly restore the camaraderie from their youth.  They sing together well and Gomez displays fine vocal talent as well as acting.  Notably excellent acting performances are demonstrated by Brent Florenda Sitwalla-Pum as the old man,  April Ortiz as Betty Still Smoking, Jeff Barehand as White Feather, Spencer Battiest as Tonto or Thomas and JohnLee Lookingglass as Sheriff Running Buck.  Their talents are impressive, and the Taylor-Corbett cast is perfect, with thoughtful direction.

Additionally performing with distinction are Xander Chauncey as Jim Running Crow and Chelsea Zeno as Shareen.  Ryan Duncan as Sam Silver and Hector, Jonathan Lynch as Smudge, Katie McCollum as Aiyana and Karsten Tate as Roberta lend their vocal dexterity to the production.  The Native American dancers are wonderful, and among w them is Matoaka Little Eagle in a delightful performance playing Grandma Jingle Dress.  She is an elder of the tribe looking forward to dancing in her dress of Jingles, and wavers between confusion and wisdom in a delightfully light on her feet way.  Graham Primeaux, Cricket Shields and Skyler Nucosee are the superb Native American Dancers adding a great deal to the eclectic show.

The minimalist yet evocative set, lighting and sound are well done and the crew does a fine job of presenting “Distant Thunder” in the outdoor venue.  Aiden Le:iden Rogers as the young Darrell and Chava Florenda round out the cast nicely as well as the several understudies whose contribution is invaluable. Overall, this show is executed with excellent precision and attention to detail showcasing the multiple talents of an exceptional cast.

The location is the outstanding facility provided by the First American Museum located at 695 First Americans Boulevard near downtown Oklahoma City.  The museum itself is a place of fascination as well as history bringing the wisdom and culture of the Native American population to life.  For information and tickets visit www.lyrictheatreokc.com or call 405-524-9312.  “Distant Thunder” is an important work revealing much that is not understood in life for all peoples and the First American Museum is the perfect venue to experience the show.  Since it is outdoors dress warmly and bring a blanket or heavy shawl as the night can be chilly.  “Distant Thunder” plays March 23, through March 27, so now there are only two performances left, Saturday at 8:00 pm and a Sunday 7:30 performance.  You don’t want to miss it! 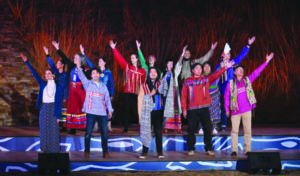 The cast of DISTANT THUNDER. Photo courtesy of Miki Galloway.