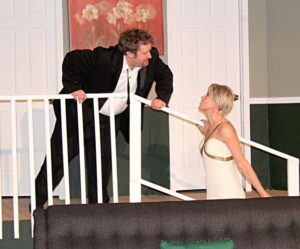 Neil Simon is one of our most prolific as well as funny playwrights with numerous successful Broadway  productions.  One of them is “Rumors” written in 1988.  “Rumors” is a particularly popular play, as it has plenty of opportunity for actors to shine—farce is fun!  In the collaboration between author and performer it is absolutely paramount that actors have impeccably perfect timing.  Director Denise Hughes has assembled a cast that has that element of perfection in their performances.  Hughes brings out the best in her ensemble cast of 10 comedic talents.

The action takes place at the home of Charley and Myra Brock who are hosting a dinner party.  When the first couple, Ken and Chris Gorman, arrive they hear what may be a gunshot so they enter uninvited and clearly the Brocks are not prepared for company.  Myra is missing and Charley is upstairs bleeding.  As good friends do, the Gorman’s attempt to protect the Brock’s from whatever has happened and the ensuing rumors create improbable to impossible scenarios.  Of course, the truth is nothing as they imagine, but no one finds out what really happened until the end.  And of course, the actors come across just as surprised as the audience, and that makes it delightful. 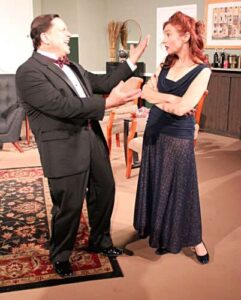 Ed Spinelli as Lenny Ganz and J. Christine Lanning as Claire Ganz discuss the events at the very interesting dinner party in “Rumors”

Taylor Reich is Ken Gorman and his better half is played by Katie Kimberling making her Jewel Box debut.  Kimberling took a 30-year break from theatre because life happened, a familiar situation to many of us, but, while she has gained maturity in this time away she has certainly not lost her abilities.  As a result she performs ideally opposite Reich, who is undoubtably one of Oklahoma City’s premier actors.  Also showing up for the dinner party are Claire Ganz, expertly portrayed by J. Christine Lanning and husband Lenny hysterically done by Ed Spinelli.  The Cusack’s arrive with John Covaleski as Ernie Cusack and the incomparable Lilli Bassett as Cookie Cusack.  This is Covaleski’s debut as well and he is very well matched with the seasoned and very funny Bassett.  The Coopers are delightfully played by Katy Hayes as Cassie Cooper and another debut performer, Jack Patchell as Glenn Cooper.  These four couples are well-suited to their roles and matched with excellent balance. 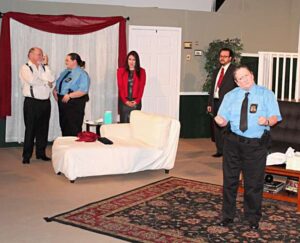 Chris Harris as Officer Welch detecting while Officer Pudney (Emma Cook)  is entertained by the attendees of the dinner party in Neil Simons “Rumors.  Guests are John Covaleski as Ernie Cusack, Katy Hayes as Cassie Cooper and Jack Patchell as Glenn Cooper.

Chris Harris is always a joy in any production and brings a great deal of charming hilarity to her role as Officer Welch.  Her attempts to figure out what is going on in this zany household leaves one just as confused as ever yet feeling that everyone is finally in good hands!  Emma Cook is Officer Pudney, another debut performance that bodes well for the theatrical community.

Hughes use of new faces in this community is refreshing, taking good advantage of the experience gained in life as well as acting experience gained in other communities.  But also pairing the performers  with actors familiar to Oklahoma City audiences and the stage is well-done!  It is always encouraging to be impressed with new faces as well as being comfortable with seasoned performers.

Hughes is assisted by a powerful crew with Michelle Hall working as Stage Manager and Props and Arianna Tull in Costume Design and Crew.  Spencer Hoskins designs the sound while Isaiah J. Williams designs lighting.  The realism of “Rumors” is greatly enhanced by Peter Fischabers contribution in Fight Choreography.  Cadence Cloud is in charge of set construction. 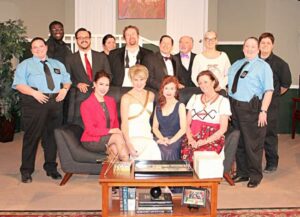 “Rumors” runs March 17,  to April 3, 2022.  Performances are 8:00 evenings with a 2:30 Sunday Matinee performance.  The Jewel Box Theatre fits in beautifully to their new location at 321 NW 36th Street in Oklahoma City.  Visit JewelBoxOKC.com or call 405-521-1786 for reservations and information.  After all, this is a show suited to sophisticated theatre goers as well as novice attendees and will be a delightful experience for all!