Laughs Galore With “Arsenic and Old Lace” at the Jewel Box 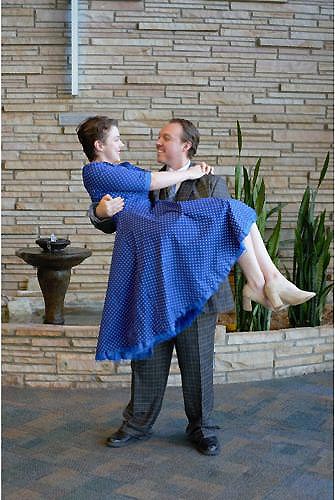 Joseph Kesselring’s “Arsenic and Old Lace” has been a favorite for theatre patrons since it first opened at the Fulton Theatre on Broadway in 1941.  Since then it has become a successful film and a staple choice for academic and community theatres as well as professional houses.  This success is due to the hilarity of the dark comedy.  It is the epitome of wit, slapstick, double takes and rapid-fire timing when performed with the kind of excitement seen in the Jewel Box production opening August 22, 2019 in Oklahoma City.

Denise Hughes directs a talented cast of twelve in this delightful story of the homicidal Brewster family living in Brooklyn, New York.  Mortimer Brewster is played by Joe Burleigh, a man with incredibly flexible eyebrows to augment his acting skills.  He has fallen in love with Elaine Harper played by Julia Seely in her Jewel Box debut.  Seely is a beautiful actress with excellent timing and the two romantic leads together have the chemistry of Tracy and Hepburn.   Burleigh never misses a moment to capitalize with physical humor as well as magnificently comical expressions.  Seely has the elegance and grace of Audrey Hepburn combined with the wit and beauty of Katharine Hepburn. 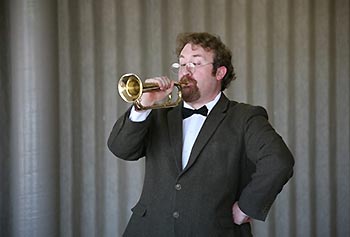 Darron Dunbar plays Mortimer’s evil elder brother Jonathan.  Jonathan has returned after many years with the face of Boris Karloff thanks to his friend and colleague, Dr. Einstein played by Matthew Percival.  He arrives at the family home where Mortimer’s beloved aunt’s still live as they care for Mortimer’s other brother, Teddy who is gone rather batty.  So batty he believes he is actually Teddy Roosevelt and behaves accordingly. Taylor Reich creates this hysterically funny character with precision and humor. 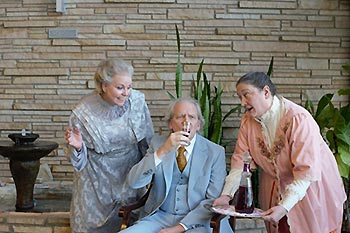 The two adorable spinsters who have spent their lives lovingly raising these three completely different nephews may be sweetly genteel aunties but they are also criminally insane.  The premise is amusing, but Carol McDonald-Walley as Aunt Abby Brewster and Chris Harris as Aunt Martha Brewster have created pricelessly side-splitting characters up to scrumptiously saccharine evil with the innocence of cherubs.  There are moments when the lacy frilly aspects of these two delightful actresses are nostalgically sweet and funny, then suddenly hysterically frightening.  Each has her own set of incredibly humorous glances and expressions to treasure.

The remaining five actors play a variety of rollicking cameos; either bumbling examples of Brooklyn’s finest, or gullible victims in waiting as well as a man of God and decorous behavior.  Robert Mills as Officer Brophy and Cam Taylor as Officer Klein are deceptively blind in their roles as policemen collecting from the generous aunts for toy donations.  Larry Harris plays Mr. Gibbs, an elderly proper gentleman unaware that he is destined to become a new target for the sympathetic attentions of the helpful and murderous spinsters.  Later Harris is unrecognizable as the officious Police Lieutenant Rooney who pays great attention to arresting serious criminals while blindly overlooking obvious crimes.  Doug Monson is Officer O’Hara who has written a play and corrals Mortimer Brewster into helping him.  As fine examples of Brooklyn’s finest, they are finely tuned in their inept but bureaucratic approach to law enforcement.  Barry Thurman plays the Reverend Dr. Harper, neighbor and father to Elaine.  While he admires the Brewster family for their dedication to charitable deeds, he is a little uncertain about the courtship of his daughter by Mortimer Brewster who is connected to the disreputable profession known as theatre.  Thurman, then returns as the open-minded, Mr. Witherspoon, superintendent of Happy Days Sanitarium. 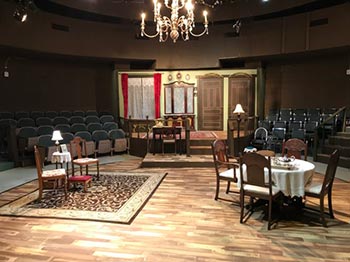 Hughes has done wonders with her exciting cast of rubber faces and quick wit.  The beautiful set by Richard Howells is decorated with lavish attention to detail by Christine Jolly who must have a slightly dotty spinsterish aunt in her life.  Kristy Johnson created lovely costumes for the period and Cole Causey and Josie Walley do everything else.

“Arsenic and Old Lace plays at Jewel Box Theatre from August 22, through September 15, 2019.  The theatre is located at 3700 N. Walker at the northern end First Christian Church.  For tickets and information contact the box office at 405-521-1786 or visit www.JewelBoxTheatre.org. 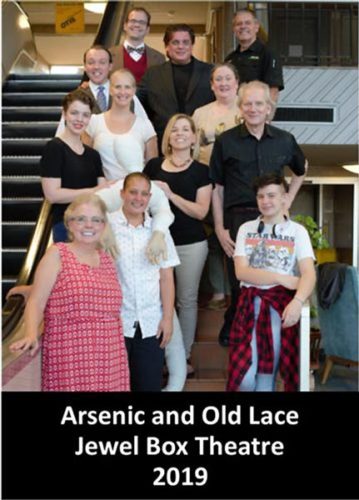