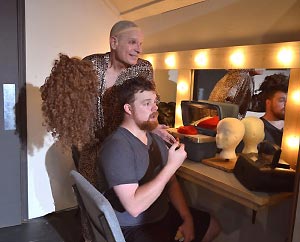 Carpenter Square Theatre has big plans for Season 36. They’re moving to a new location later this year. Their season opener, The Legend of Georgia McBride, will be presented at their 800 W. Main location. The move will occur after this play closes.

The Legend of Georgia McBride is a hilarious take on the important topics of sexual identity and acceptance. When Elvis impersonator Casey gets fired from his job, he has to find another means of making money. With a pregnant wife at home and bills piling up, Casey steps out from behind the dive bar, where he’s barely scraping by, and into the heels of his new drag persona. He’s never done drag before, so he enlists help from his friends. From there, Georgia McBride is born and the tips start rolling in! However, his wife doesn’t know…but she’s bound to find out, somehow! 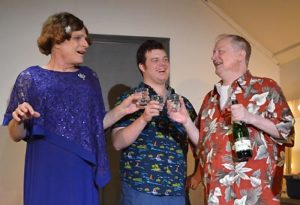 Mark Ingham, Derek Kenney, and Paul Austin in The Legend of Georgia McBride.

Carpenter Square Theatre is once again set to provide the city of OKC enjoyable and thought-provoking community theatre. The Legend of Georgia McBride runs September 6th-28th at their West Main location. Following the opening production of Season 36 is Holmes and Watson, October 18th-November 9th. Just in time for the holidays is The Santaland Diaries, running November 29th-December 21st. The Mystery of Love and Sex runs January 10th-February 1st, 2020. It’s followed by The Library, February 21st-March 14th, then A Funny Thing Happened on the Way to the Gynecologic Oncology Unit At Memorial Sloan Kettering Cancer Center of New York City (quite a mouthful) runs April 3-25th. Advance Man runs May 15th-June 6th, and the season closes out with Ken Ludwig’s A Comedy of Tenors, June 26th-July 18th. What a robust season Carpenter Square has planned!! All should occur at their new location, after Georgia McBride.

In a further enrichment of the theatrical experience, CST’s lobby is adorned with accompanying art-work for each play they produce. This is in support of local artists and it’s a lovely intro into the theatre!

Tickets for The Legend of Georgia McBride are available by calling the box office, 405-232-6500. For more information about CST and their upcoming Season 36, visit carpentersquare.com