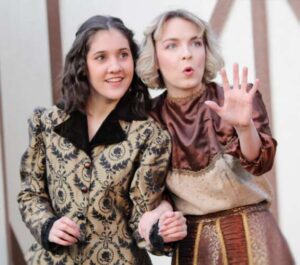 Sophia Boyer as Celiz (left) and Emily Pace as Rosalind in “As You Like It” at Oklahoma Shakespeare in the Park. Photo courtesy of Kathryn McGill.

Oklahoma native Erin Sloan is directing “As You Like It” through May 14, 2022.  It is great to be back for regular seasons and say goodbye to the worst of the pandemic.  Oklahoma Shakespeare in the Park begin the 2022 season with “As You Like It” a delightful comedy showcasing Shakespeare’s signature twist of characters in disguise creating confusion and social gaffes galore.  The play is not only a great example of Shakespeare’s literary genius, it is a great example of his wit and humor.

Sloan seduces the audience with a cast of Shakespearean actors able to capitalize on the material, with perfect timing and a very well-developed sense of comedy.  Set primarily near the Arden Forest, probably the Forest of Ardennes, somewhere in France, Duke Frederick has usurped title and position from his elder brother and the rightful Duke, Duke Senior.  He has exiled his brother who has retreated to an  enclave in the Arden Forest.  Duke Senior’s daughter Rosalind is very close with her cousin, Duke Frederick’s young daughter Celia so Rosalind is allowed to stay at court until her uncle loses temper and trust, banishing her as well.  Rosalind disguises herself as a young man, Ganymede,  for her journey into the forest, and she is joined by her cousin, Celia, whose loyalty in friendship is remarkable.  As Rosalind takes the name of Ganymede, Celia accompanies him as poor gentlewomen, sister Aliena.  Joining them is Touchstone, Duke Frederick’s former fool.

Orlando de Boys, younger son of Duke Senior’s great friend is also being persecuted by a brother, in this case the elder brother. He has been at court long enough to encounter Rosalind and prove that there is such a thing as love at first sight, so he and his faithful servant, Adam also travel to the forest in search of his father’s friend the exiled Duke Senior.  Meanwhile Ganymede and Aliena have yet to come across Rosalind’s exiled papa, but they do encounter a peasant wishing to retire and purchase his cottage.

Ultimately they all meet up together in the lovely forest with shepherds and shepherdesses falling in love all over the place as well as those of more noble position.  Much confusion in the many love stories occurs due to the presence of the self-styled counselor of love, Ganymede.  Ganymede does not reveal herself as Rosalind until she has confounded everyone, especially Orlando as the spark is mutually electric. 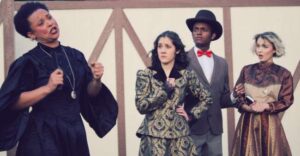 Mariah Warren as Madam Le Beau, Sophia Boyer as Celia, Cameron A. Brown as Touchstone, Emily Pace as Rosalind, “As You Like It” Photo courtesy of Kathryn McGill.

Emily Pace leads the cast as the beautiful Rosalind. Pace has a flawless sense of comedy and  the polished timing that makes Shakespeare work for modern audiences.  Her loyal friend, Celia is played by Sophia Boyer with equal skill.  Devin Ricklef is the heart-stopping and handsome Orlando who manages not to notice that his beautiful Rosalind is also Ganymede; counselor to the lovelorn.  Touchstone, the perfect fool is perfectly played by Cameron Brown.  Jacques, an elder son of the deceased Rowland de Boys is convincingly played by Aaron Michael, while Matthew Moreillon is a solid Lord Oliver.

Shaun Kilburn portrays both Duke Senior and his false younger brother distinctively revealing the humor in the distinguished rightful Duke offset by the ill-favored usurper.  David Fletcher-Hall is Adam, faithful follower of Orlando as well as Corin, the shepherd who retires and a Messenger.  The role of Adam is vital as in addition to being humorous and fun, Adam provides the cohesiveness that holds the play together with great skill.

Lindsey Rollins is several characters, and her performance is enhanced by her excellent vocals as well as comic instincts.  Mariah Warren is Phebe and Madame Le Beau, strong as always in her characterization.  Tyler Malinauskas is both Charles and Silvius with natural strength and vitality. Abby Bryan also has multiple parts but most notably the rather silly and vacant shepherdess, Audrey.

Every performer in this production contributes with excellence providing a coherence in the comedy that enhances each performance.  Shakespeare’s convoluted story-lines require an approach that simplifies the play for the audience while enhancing the entertainment and this cast achieves that aim graciously.  While they do not appear, Lauren Linsey, Andie Fuentes and Jonathan Lynch are loyal understudies providing essential support.

Sloan also has support from her crew, as well as the entire production team.  Kathryn McGill, Executive/Artistic Director and Tyler Woods, Executive Producer supply a secure performance foundation enabling and inspiring their casts.  Chloe Mullin designs the costumes for “As You Like It” while Emily Bond is Production Stage Manager as well as Sound Engineer with Dillon Rasberry assisting.  Rebekah Brown handles the properties and Erin Woods the comprehensive playbill.  In addition to understudy for Rosalind and Phebe, Lauren Linsey is Assistant Director and Dramaturg.  Sloan is responsible for the Fight Choreography in addition to directing.

“As You Like It” is performed in the Oklahoma Shakespeare in the Park beautiful outdoor space, Shakespeare Gardens, located at their Paseo venue.  Patrons should bring camp chairs for seating, although a simple blanket is quite comfortable on the luxurious grass.  The space is also secluded enough to offer some protection from the wind, although it can be cool so a warm jacket, shawl or blanket is important.  Curtain is 8:00 P. M. April 29, 2022 with performances Thursday through Sunday, although the final performance is Saturday, May 14, 2022.  The address in the Paseo district is 2920 Paseo in Oklahoma City.  For further information or tickets visit  www.okshakes.org or call 405-235-3700.  Springtime is finally here, so ‘prepare ye for a lark!’