Lyric Theatre Comes Back to the Plaza with “Head Over Heels” bringing Fun and Fantasy Back Inside! 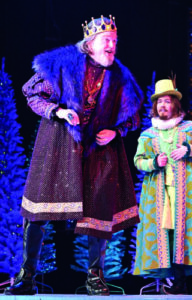 Vince Leseney has an expansive presence as well as voice and it takes a hearty crew to perform at that level.  Michael Baron assembled that hearty crew in Lyric’s “Head Over Heels” currently playing at the Plaza.  Yes, they are back indoors at Lyric’s home theatre in the Plaza district!

“Head Over Heels” is an exuberant musical written by Jeff Whitty.  The show is based on ‘Arcadia’ by Sir Philip Sidney, but the music is all from rock and roll icons The Go Go’s.  The premise is that mythical Arcadia is a kingdom that capitalizes on their beat.  They have the best sound in the world based on the beat in their music.  However, an oracle prophesies that they could lose this and they must avoid that at all costs.

King Basilius is played by Vince Leseney and he must lead his entourage on a quest of discovery and to destroy the usurper the oracle says will displace them or the best beat will be lost to oblivion.  The entourage includes Queen Gynecia played with remarkable skill by Mandy Jiran.  Additionally the beautiful Princess Pamela, eldest royal daughter joins them starring Alyssa Peters and her exceptional voice.  The next daughter is Philoclea, considered the plain one—not so!  adeptly portrayed by Sierra Sikes.  Accompanying them is lady’s maid, Mopsa, beautifully played by Sabrina Brush.  Mopsa is also the daughter of minister Dametas portrayed by Nick Hone with consummate skill in humorous musicality.

Following along in disguise are the shepherd, Musidorus, wonderfully played by Seth Paden.  Musidorus loves Philoclea, but pretends to be Cleaphilo, Amazonian warrior, to join the royal procession through Arcadia.  Stalking everyone with stealth and stamina is the Oracle Pythio played by Sheridan McMichael.  It becomes apparent that achieving success as an oracle entails the enjoyable activity of arranging the events and McMichael does so with a voice as impressive as the longest of legs!

But the group has some advantages, mainly the best from the music of The Go Go’s the magnificent all-girl band that have had three decades of success that is well deserved.  Inducted into the Rock and Roll Hall of Fame in 2021, The Go Go’s are a force of nature at it’s most beautiful, and with “Head Over Heels” many of us are reminded of their influence on lives from the end of the 20th century through the first decades of the 21st, as they remain relevant as well as entertaining. 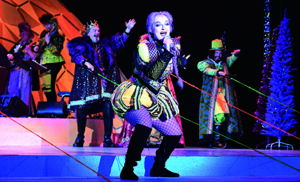 “Head Over Heels” has a live band on the stage for the performance who duplicate the music of The Go Go’s wonderfully.  Also in addition to the wonderful ensemble cast of 8, there are 8 understudies, one for each performer.  An understudy must wait for an opportunity to shine that almost never comes, and until such a time, one suffers in silence and boredom.  But in “Head Over Heels” Baron made a brilliant directorial decision having the understudies dancing in the aisles, participating whole heartedly in the show and inspiring the audience to feel the beat of Arcadia.

The extravaganza opens onto a surprising and intriguing set by Deb Sivigny that is beyond apropos and exciting to Oklahoma City audiences.  The costumes are fabulous, designed by Jeffrey Meek and the wig designs by Brawna Brinkley Gfeller are expressive and not at all ridiculous for this group of interesting characters.  Music director Reagan Casteel is fabulous and the choreography from Amy Reynolds-Reed is stupendous.  The result is a delightful evening full of spoofery and spoonery.  They learn, as do we, that they are they and always will be and who are we to judge?

“Head Over Heels” plays indoors! At the Plaza theatre in the beautiful Plaza district at 1727 NW 16th Street.  Although the parking can be difficult there is plenty at the offices just a block away, and a pleasant walk past fine shops and delicious restaurants.  So, come a little early and enjoy a nice dinner.  Curtain is 8:00 pm weekends with a 2:00 pm Matinee on Saturday and Sunday. 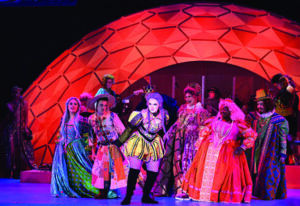 The cast of HEAD OVER HEELS. Photo courtesy of Miki Galloway.

For information and tickets visit www.lyrictheatreokc.com or call the box office at 405-524-9312 and make arrangements to see some good old-fashioned and light-hearted entertainment that is absolutely and unadulteratedly modern.