After Shanita (Mariah Warren) has a meltdown, worried about the future for her and her baby, Dez (Aldan Olds) tries to reassure her in a scene from SKELETON CREW playing May 21-June 12 at Carpenter Square Theatre.

Carpenter Square Theatre is presenting “Skeleton Crew” by Dominique Morisseau through June 12, 2021.  Directed by Albert H. Bostick Jr. and starring four superb actors this performance details a slice of life in the city of Detroit during the economic downturn of 2008.  The automobile industry is in collapse and factory shutdowns are commonplace.  And of course, Detroit, the motor city is adversely affected in a major way.  The African American community suffers greatly due to this series of crises.   “Skeleton Crew” is the third installment in a 3-play cycle by Morisseau entitled ‘The Detroit Project’ highlighting different periods and situations.  The 2008 recession with the factory closings is particularly devastating to the city of Detroit and the employees of those factories are largely African American, working class folk verging on working poor.

The hallmark of a great playwright is the ability to reach out and make what may be a personal and unique experience universally understood and relatable.  Morisseau does so skillfully.  This must be accomplished with subtlety and vision and much of that is dependent on the direction.  Bostick’s artistry in direction and his creative conceptualizations make “Skeleton Crew” a timeless and relevant production applicable to the entire range of what is called ‘the human condition.  His cast of four are adept at telling the story with truth, color, substance and humanity.  The result is a production that speaks to everyone on a personal level, regardless of personal experience. 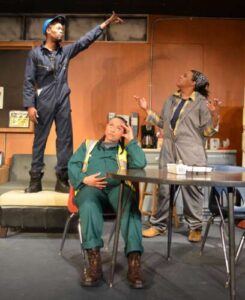 Dez goes on a tirade, complaining about their boss to some of his coworkers in Dominique Morisseau’s SKELETON CREW playing May 21-June 12 at Carpenter Square Theatre.  Pictured left to right are Aldan Olds, Mariah Warren and Nykezia Giles.

Nykezia Giles is Faye, a matron with nearly 30 years of at the plant where she is employed.  She is looking forward to retirement, and the magic retirement number is 30, not 29.  She has heard rumors that the plant may close, and is on tenterhooks personally because as long as the plant can last until October, she will be able to retire, rather than be unemployed at the unemployable age of nearly 50.  She is also concerned about other employee’s particularly the young mom in waiting, Shanita, played by Mariah Warren and the cocky Dez played by Aldan Olds.  Her heart is closely joined to the supervisor of the group, Reggie, played by Rory Littleton. Faye recommended Reggie for his first job at the plant, as he is the son of her greatest friend who is deceased.  She is proud of him as he has advanced into management and has a ‘collar’ enabling him to be a successful middle-class husband and father.   They work together, although they are occasionally at odds as Faye is now the union representative and he is management.  But their goals are the same, only the pathway to achieving those goals differs slightly.

The universality of this story is apparent as each member on the ‘line’ must fight to retain a livelihood, a future with home and family.  Laboring to maintain a sense of respect and self-respect, as well as a sense of pride is paramount.  Doing so in the middle of an economic downturn when all the power is in the hands of a corporate bureaucracy and the natural consequences that occur within bureaucratic entities.

In today’s climate of political turmoil there is an increasing degree of polarization, questioning whether the government is either the source of the problem or the solution to the problem.  The subtle universality within “Skeleton Crew” can be seen in the recognition that the power lies in the bureaucracy.  There are many instances of obdurate organizations within our society; government bureaucracy, academic bureaucracy, healthcare bureaucracy and corporate bureaucracy.  And of all these, corporate bureaucracy is the most intrusive. One gets up every single morning and goes to work most likely for a corporation.  Regardless of where we live, or what government we live under working people are ruled by corporate bureaucrats above all else.  And, while many, perhaps most, bureaucrats are compassionate and human, the  system is designed specifically to control utilizing the important tool of dehumanization.  The tendency of any group in power to maintain control and superiority is to insure that the masses remain voiceless as much as possible.  Those who rise to power become the elite, and superior, those beneath ultimately are viewed as subhuman in the system regardless of the humanity of the individual supervisors.  This has been a hallmark of societal ills for time immemorial, although in our modern era a change is taking place.  Rather than being viewed as subhuman, the masses are often viewed as sub-living. 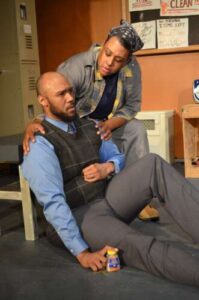 The stress of worrying about his workers while doing the bidding of upper management is getting to Reggie in Dominique Morisseau’s SKELETON CREW. Pictured left to right are Rory Littleton as Reggie and Nykezia Giles as Faye.

The Carpenter Square production shows exquisite adeptness at revealing the universality of this central aspect while the story line is true to a devastating situation particularly applicable to the African American population of Detroit.  As a result, the production is a telling and moving experience that is important.  The situation is a tragic situation, and Morisseau as well as Shakespeare understands the importance of comic relief.  The portrayal of the individual struggle against an unjust mentality and the individual triumph of personality in humor as much as tragedy is portrayed exceptionally by all of the actors.

Nykezia Giles portrays Faye with wit, sensitivity, believability and great empathy.  She makes Faye easy and delightful to identify with.  Giles takes advantage of each and every opportunity to capitalize on the character to increase appreciation of Faye’s situation and also the situation of all of the other characters in the play.

Aldan Olds plays Dez with such a profound understanding of a young man undergoing the typical rebellion against the injustice he encounters whether imaginary or real.  Yet throughout this one can see a deep commitment to a strong sense of moral values that does not waver.  He is energetic and consistently amusing.

Rory Littleton reveals the heartache his character encounters as he tries to balance the needs of his employees against the desires of his employers.  His dilemma is palpable and his humanity is put to a test.  His strength as an actor becomes apparent, as his ultimate solution is a surprise, and a creative one.  The interplay between Reggie and Faye as they eventually come to the only inevitable solution is as beautiful as it is soulful.

Mariah Warren’s character, Shanita is not exactly comic, but she is unswervingly and humanly amusing.  Her music is entrancing as she marches to her own beat.  She does have one of the most comic scenes in the show, and her diatribe regarding traffic and the difficulties encountered merging in traffic is not only hysterical, but her version should be recorded and made an essential lesson of every driver-education class in existence!  It is hilarious, and delivered with exceptional mastery.

“Skeleton Crew” is a winner and in spite of the tragic circumstances not a tear-jerker, just a truthful commentary on the impossibility of the human condition.  While it is so sad, it is so funny and the balance Morisseau has written is developed and wonderfully expressed by the  intensely involved direction of Bostick.

Assisting in the production is Kathryn Lemons, stage manager, and Rhonda Clark, costuming.  Jay C. Schardt does the lighting design and Bostick the sound design.  Set construction and painting is due to the efforts of Ben Hall and Scott Hynes along with Lars Justice on the realistic set designed by Hall and Bostick.

Bostick is certainly multi-talented…the lobby artwork is Albert H. Bostick Jr. once again, and his talents are revealed through his visualization on canvas.  And, for the fashion conscious, on ties! There are many pieces that are not only expressive and lovely but affordable. 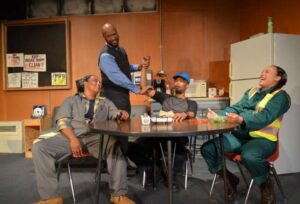 : The boss and Dez’ coworkers have fun at Dez’ expense in Dominique Morisseau’s SKELETON CREW.  Pictured left to right are Nykezia Giles as Faye, Rory Littleton as Reggie, Aldan Olds as Dez, and Mariah Warren as Shanita.

“Skeleton Crew” plays from May 21 through June 12 and is an absolutely essential show for any calendar.  Curtain is 8:00 pm weekends and 7:30 Thursdays.  Matinees are Sunday at 2:00 pm.  Carpenter Square Theatre is located at 800 West Main at the Shartel corner in downtown Oklahoma City.  For tickets and information visit www.carpentersquare.com are simply call the box office at 405-232-6500.