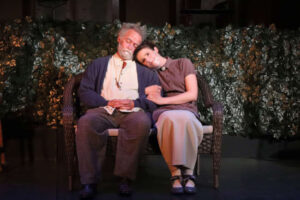 Rob May as Captain Shotover and Megan Billings as Ellie Dunn enjoy a brief quiet moment in the garden of Heartbreak House. Photo courtesy of J. Christine Lanning.

“Heartbreak House” is a convoluted play filled with typically English, rather un-inspirational characters symptomatic of the upper middle class.  This time period in English society reflects a certain decadence and comfort in the status quo.  The year is 1914 and the specter of the Great War about to begin hangs like a dark cloud over the landscape. The full title of the play is “Heartbreak House: A Fantasia in the Russian Manner on English Themes” and was published in 1919, premiering in 1920 at the Garrick Theatre.  Shaw adapts the style of Anton Chekhov and it works unusually well, or at least unusually.  Nevertheless, one cannot gain a greater understanding of Chekhov through Shaw’s work, or the reverse without becoming as witless as some of the Shavian characters.

The play takes place in the ‘stern’ Sussex home of Captain Shotover, a quite elderly and genuinely eccentric retired sea captain.  He is the father of two daughters: Hesione Hushabye and Ariadne Utterword.  Hesione has invited guests to dinner at her father’s home, but falls asleep before remembering to tell anyone of the expected visitors.  No one is surprised except the guests.  Ellie Dunn is considering marriage with Boss Mangan, the brilliant capitalist whose largess has been the godsend of her inept father.  Mangan attends as well as her father, Mazzini Dunn.  However, Ellie is somewhat dazzled by Hector Hushabye, Hesione’s husband, a handsome ladies’ man. 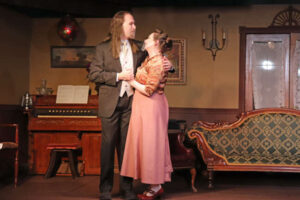 Daughter Ariadne has just returned for a visit after an absence of 23 years.  Her dear father, Capt. Shotover pretends not to recognize her.  She is joined by family member Randall Utterword.  It is important to note that spouses in the best of families are barely considered to be actual members of the family.  Additionally, Billy Dunn, apparently of no relation, but often mistaken for a member of the Dunn family appears. The sanest household member is the old family retainer.  Once nurse to the daughters, Nurse Guinness very effectively mis-manages the household to the delightful dissatisfaction of all.

The characters are all a superficial lot, with cultivated eccentricities and carefully shallow facades overlaying a deeper connection with idealism.  It is fortunate to understand that idealism is destined for disillusionment, yet these characters seem too disinterested to bother with disillusionment.  And that is what makes them intellectually fascinating.  These characters seem to leap between their polished veneers into fantasy without ever stopping to consider if such a thing as reality exists.  Why bother?  Presenting Shavian characters takes a cast dedicated to the craft of creating a sustainable illusion.  Each character is developed to display a pleasingly displeased countenance and situation in life that becomes charming in and of itself.  Following the ins and outs of everyone’s relationship is not as important as recognizing their lack of ability to relate.  All of the characters have fallen in love with their own intricacy.  Therein lies the humor, sometimes subtle and often biting.

Don Taylor directs a cast of ten with the assistance of Kat Adams.  Christine Jolly manages the stage with J. Christine Lanning pulling together costumes. Amandanell Bold creates the sound and lighting design.  A dramaturg is an important addition in this show and Anna Holloway handles this as well as performing.  All of the characterizations are excellent thanks, in large part, to the smooth performance of the production staff. 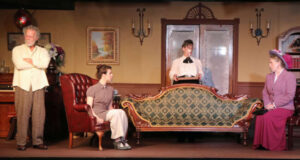 Leading the cast is Rob May as Captain Shotover.  His irascible character is crusty and borders on cruelty, yet May makes the ancient mariner somewhat admirable; almost lovable.  Korri Werner is daughter Hesione Hushabye, a thoroughly modern woman with a broad outlook on marriage and life.  Unfortunately, the lady has no concept of what constitutes a marriage and Werner reveals this lack as an amusing portrayal.  Denise Hughes is the prodigal daughter, Ariadne Utterword, preferring a more traditional appearance of wedlock yet she is just as perversely tuned to matrimony as her sister.  This seems to be an advantage to their husbands, lovers, in-laws and assorted admirers.  Peter Fischaber is Hector Hushabye, Hesione’s blatantly wandering husband.  Fischaber creates a grace within the character than indicates an affection for his wife in spite of her lack of interest in his activities.  Ronn Burton reveals a cowering Randall Utterword who carries a heavy burden any other gentleman would find rather light.

Megan Billings is Ellie Dunn, the beautiful, young and impressionable gold-digger with a heart of gilt.  Billings has a unique poise that gives the sweet young thing a credible tartness.  Edmund Gert is Mr. Dunn, the papa, a good man, an excellent man, Mazzini Dunn has made himself a failure out of success.  Taylor Reich is Boss Mangan, respected businessman who has made a success out of failure capturing the acquisitive heart of feminine pulchritude.  Together these two capitalize on the downfall of societal consumerism.

Matthew Moreillon burgles his way into the home endowing himself with great sympathy to bring about voluntary donations from his victims.  Recognized as Billy Dunn, his ingratiation disintegrates.  His primary connection is to Nurse Guinness.  Anna Holloway is Nurse Guinness of pleasant demeanor–the family retainer who maintains her position by staying at the bottom of things rather than on the top–quite the opposite to her off-stage function as dramaturg! 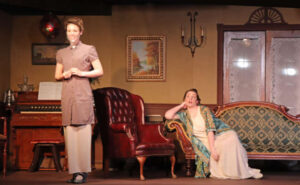 Taylor guides the entire cast through convoluted relations, contrary opinions, carefree attitudes, careless remarks and condescending and cavalier behavior.  As a result, the particularly dysfunctional family situation becomes normalized.  Of course, English country life has always been a bit dysfunctional, almost as much as modern American life.  Their saving grace is their wit, often barbed, always on target.

“Heartbreak House” is lengthy enough to need two 10-minute intermissions, although thanks to the excellence of the performance the time passes swiftly.  The show runs from May 7 through 23, 2021.  Friday and Saturday have an 8:00 pm curtain and Sunday a 2:30 pm matinee.  The address of 3rd Act Theatre is 12040 N May Avenue in the Shoppes at NorthPark Mall.  For information and tickets visit info@3rdacttheatreco.com or call 405.593.8093.  “Heartbreak House” is considered appropriate for ages 13 and up.

The pandemic is beginning to show signs of receding and thusly the quickest return to normal is to maintain vigilance in the Covid-19 policy.  Face coverings are required for the audience, crew members and volunteers and the actors will be wearing clear face shields on stage.  There are no concessions and food and drink will not be permitted in the venue.  3rd Act Theatre is dedicated to the premise that audience members be safe and healthy as we gear up for Season 3:  Unknown! 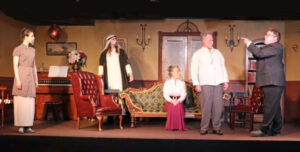