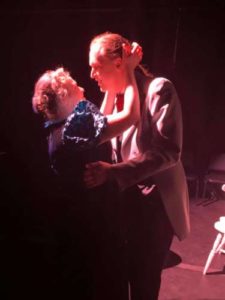 I was excited to see one of my favorite author’s words presented live on stage as opposed to the movies that we generally are exposed to. Seeing a play version of Jane Austen’s “Persuasion” is a great idea for a date night or afternoon matinee as presented by Bethany Stage, 6632 NW 36th St, Bethany, OK 73008, www.thebethanystage.com. I was fortunate to attend the opening show of a performance packed weekend, it’s only weekend.

I was immediately struck by the unique setting in the small intimate room. The audience sits on either side of the playing area with a platform and projection screen at the far end of this approximately 50 seat venue. Audra Faust, director, has put together a very accessible version of a book with various plot twists and the use of 18th century English accents. The cast all stepped up to the accent challenge which further supported Jane Austen’s story as adapted by Jon Jory (not an easy task). The screen was used as a TV type of intro to the cast and then as a backdrop for the various tableaux, even furthering the feel of the motion with the carriage (a clever use of the screen that unfortunately didn’t continue throughout the rest of play).

The story centers around a family of 3 sisters, energetically  performed by Lydia Carlton (Mary), Mikala Novitsky (Elizabeth ) and the middle plain one Kristin Stang (Anne Elliot). Anne has an integral part in the story which , an abridged version, has her being engaged to Peter Fischaber (Captain Wentworth) breaking it off then re-igniting that flame 8 years later when he is now worthy (rich) of her familial social status. The stern older aunt, Christina Roby (Lady Russell/Mrs. Musgrove) is our introduction to the families’ need to maintain its upward mobility in 18th century England. This is a story centering around the women in the Elliott family and the men play a secondary role. 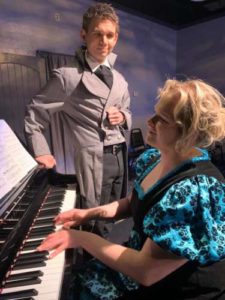 Cam Taylor as Walter Elliot, Kristin Stang as Anne Elliot at piano. Entertainment the way it used to be!  “Persuasion” Photo courtesy of Bethany Stage.

Jane Austen’s words are paramount to telling her stories which make adapting it to the stage extremely challenging especially for a cast of young actors. The entire cast should receive gold stars for their efforts to use all of the vocabulary of a foreign language (18th century proper English). Kristin Stang displays strength not accepted back then which demonstrates why at the ripe old age of 27 she is still not married. Mikala Novitsky uses just a slight hint of sneezes to make us feel for her being a hypochondriac and her being burdened with a husband. Lydia Carlton displays her flightiness as she portrays her character (Mary). Special attention goes to Kristin Stang (Anne Elliott) for carrying so much of the story on her young shoulders and maintaining her English accent without going overboard comical. Her love interest, Peter Fischaber (Capt. Wentworth) keeps up the energy and accent for both acts of this wordy play. Scott Regester (Sir Walter Elliott) makes his patriarchal place in the social strata known for all to hear. The rest of the cast, a total of 13 actors playing 20 roles (many played dual roles although there didn’t seem to be any way to distinguish when the actor would don their extra assigned character). 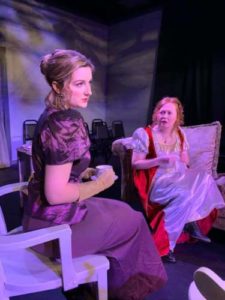 This reviewer enjoyed discovering this theater community and their presentation of a difficult subject in basically a foreign language in uncomfortable clothes. Speaking of wardrobe, I would be remiss if I didn’t mention one specific malfunction towards the end of the play that stood out because the guilty party wore brightly colored undergarments that were not a part of the Persuasion pallet. Owing to the limited seating capacity make sure you call ahead to reserve your seats. I hope that my view of this show will “persuade” you to support Bethany Stage. 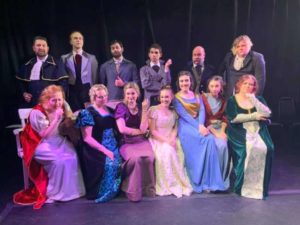