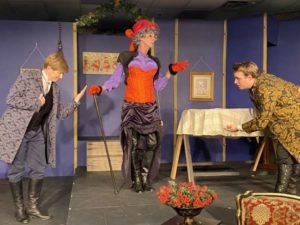 It’s no secret that one of the Oklahoma City’s newest community theatres is off to a brilliant start.  Every production from 3rd Act Theatre is an outstanding example of excellence and “The Importance of Being Earnest” is an incredibly fun and well executed show!  Directed by Jamie Brewster, this classic from Oscar Wilde, bridges three centuries of amusingly disarming wit.  The retro-futuristic concept of “Steampunk,” which capitalizes on the technology of the Victorian era making the approach quite valid, coupled with Wilde’s great Victorian ludicrous farce creates a wonderfully funny blend and naturally entertaining fit.  None of Wilde’s humor is altered; it is enhanced with a twist. 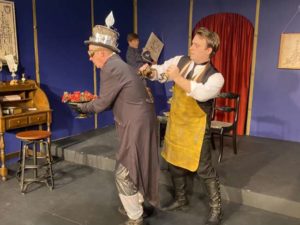 “The Importance of Being Earnest” tells the humorous story of two young men falling in love with two young women.  In Victorian England the rules of love and romance followed an unusually rigid and awkward course.  Further the two young ladies are determined they can only love a man with the name of Earnest.  While these two couples find their hilarious way to happiness they are oft thwarted by the tradition as set by the indomitable Lady Bracknell, who is the arbiter of all things socially acceptable.  Wilde hilariously spoofs his culture and Jamie Brewster’s direction translates his wit with absolutely sincerity and originality.  Further they have added a wonderful aspect using Steampunk an approach that fits this show exceptionally well.

A vital aspect in presenting such a show well is in the casting, and Brewster’s excellent direction begins with perfect placement.  Don Taylor is brilliantly funny as Lady Bracknell.  Taylor expertly uses his lanky body to create the egotistical battle-axe seen in this woman of unusual character. Her natural ability to intimidate anyone with a ‘look’ is captivating in Taylor’s characterization. 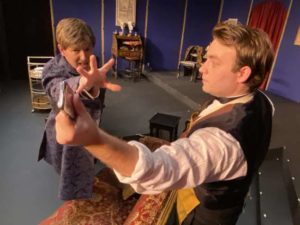 David Mays is impressive as John (Jack/Ernest) Worthing and Justice Wickstrom is impeccable as Algernon Moncrieff. Both are impertinent and quite accurate examples of usual young ‘men about town’ with money and time to spare. Holly McNatt is the sophisticated Gwendoline Fairfax and Rosemary Orwig Rodgers is the lovely wide-eyed Cecily Cardew. The interplay between these ‘sweet young things’ is marvelous to watch.  The intensity of emotion in their shallow lives is captivating. David Fletcher-Hall is delightfully elastic in the role of The Rev. Canon Chasuble.  Chris Harris plays Miss Prism with perfect dotty flair. Harris and Fletcher-Hall make an outstanding pair with flawless comic timing.  James Tyra is the epitome of droll, the ideal robotic butler, Lane.  Joe Burleigh is wonderfully disdainful as Merriman. 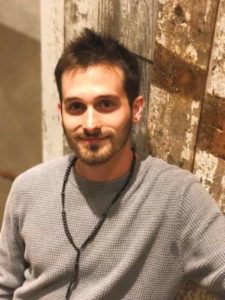 Dakota Lee Bryant, Costumer for 3rd Act Theatre’s “The Importance of Being Earnest”

Wilde’s wit as a playwright is perfectly exhibited by Brewster’s superb direction.  Brewster also assembled an impressive crew especially with costuming by Dakota Lee Bryant.  Bryant has a knack for discovering the costumes that look like they came from the attic of a fictionally perfect grandmother!  The steampunk aspect becomes a visual statement of hilarity at once.  The actors are able to use this from the beginning and that lends to the excellent creation of the hysterically funny characters.

Don Taylor’s perfect deadpan expressions will always be remembered and the visual memory of his over the top Lady Bracknell costumes are a priceless gift giving the viewer another chuckle days later.  Another example that is quite wonderful is in the character of the Rev. Chasuble.

David Fletcher-Hall creates the ideal country vicar.  It takes a subtle minute and one of Hall’s extraordinarily comic expressions to exhibit his preposterous attitudes. The costume is that of a typical British vicar, staid and unimaginative but with the addition of an outrageously smart steampunk lapel.  This understated but powerful approach is brilliant.  One can forever visualize the adorable little-boy caught with the cookie jar impish expression that Fletcher-Hall uses with such skill.  The chemistry that exists between the good Reverend and the proper Miss Prism is exotically wonderful.  Harris plays the repressed English governess and slightly frustrated spinster in her rather frumpy dress comfortably but Miss Prism also seeks adventure–is it the lapel that leads the spinster down a garden path? 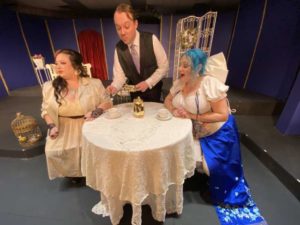 The men are very handsomely turned out.  Mays and Wickstrom have never looked so debonair or comfortably suave in their skin.  Their costumes are worn with an air of impeccable taste that Jeeves himself would deplore!  The young ladies are beautiful, sexy, and daring.  Their costumes are very revealing—not showing skin, but female manipulation and feigned innocence is thinly disguised as flattery.

Merriman reveals in costuming an untidy lack of respect.  It is primarily through his disrespectful expressions and vocalizations that Joe Burleigh conveys his contempt for British aristocratic idiocy.  Contrast Merriman with the slightly stiff and halting movement from Lane, the robotic butler.  James Tyra’s performance as Lane is delightfully mechanical in a costume that is marvelous and futuristically dated. All these images are forever imprinted as a memory of “The Importance of Being Earnest” at 3rd Act Theatre and nowhere else. 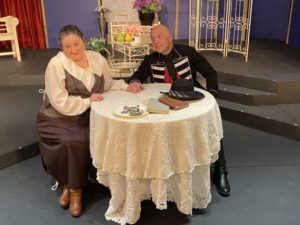 Bryant is not the only creative crew member Brewster is able to exploit; Christine Jolly is a brilliant stage manager, even allowing Amandanell Bold to cut a couch in half.  No member of the audience will be able to discern which couch is altered.  Mikie Gilmores effective lighting sets the perfect mood.  Brewster and Jolly are assisted skillfully by competent crew members during the scene changes and two 10 minute intermissions.  They are Chris Briscoe, Nanci Gray, Brance Lanning and Dani Miller and their performance is worthy and welcome.

“The Importance of Being Earnest” is presented by 3rd Act Theatre in the Shoppes at Northpark Mall, 12040 N. May (122 and May).  “The Importance of Being Earnest” runs February 7, 2020 through February 23, 2020. Curtain is 8:00 pm weekends with a Sunday matinee at 2:30 pm. For tickets and information visit www.3rdActTheatreCo.com. On Facebook check out 3rd Act Theatre Company, it is certain you will love this brand new theatre. 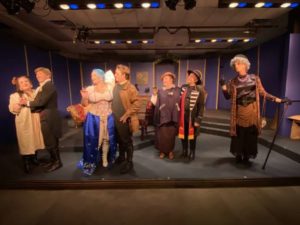 The Cast of “The Importance of Being Earnest” Photo courtesy of Dakota Lee Bryant, 3rd Act Theatre