The Pollard Enchants with ‘The Little Mermaid 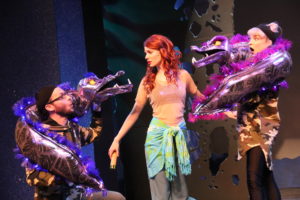 “The Little Mermaid” is being presented at the Pollard Theatre to substantial acclaim.  The movie was wonderful. It’s impossible, though, to equal special effects in animation with humans in live theatre.  Co-Directors Timothy Stewart and W. Jerome Stevenson decided to concentrate on characters and story instead. (A wise decision.) Putting their efforts into choreography, music, and acting pays off. The play is an enthralling piece of theatre for young children—and all ages.  Adults appear equally mesmerized: men and boys impressed beyond belief, and little girls, no matter what age, are sure to be thrilled to the core!

It’s the character performances that make the difference.  Ariel, moving with grace and splendor, swims through the air like Esther Williams. Choreographer Chelcy Harrell and actress Emily Paige Cleek put very hard work into this underwater love story. It reaches unparalleled heights in flights of fancy. Romantic, graceful (and slightly sexy in a sweet, silky way), Cleek is an outstanding dancer-choice for this part. She has the assurance of Maureen O’Hara, the grace of Grace Kelly, and the voice of an angel.  After all, the story is about her voice, and Cleek’s voice as Ariel is riveting.

Witnessing the incredibly smooth, sensual, amusing and delightful Crab, Sebastian, is quite fun.  Brandon Stalling is a talented student from Oklahoma City University’s vibrant Theatre Department who makes an exceedingly impressive debut.  He can sing, he can dance and he can devastate with an unsurpassed look.

As King Triton, the vocal range of Stephen Hilton soars: strict father to seven daughters. He adores all of his delightful children, but the youngest, Ariel of course, carries in her the beautiful voice of her beloved mother.  Hilton has a wonderful voice in both song and expression, displaying varied emotions—but his show of amusement is incomparably funny.  The twinkle in his eyes shines as brightly as his voice.  His sister, the evil Sea Witch Ursula, plots to steal his throne.  Cory Fields plays Ursula with amazing skill and dexterity.  A leggy creature (known for her wit as well as her wickedness), Ursula plans to use Ariel to accomplish her goal.  She flaunts her cunning with the intense manner of Joan Crawford at her best (or worst) and she may succeed with her plot.  She barters with Ariel, giving her access to land in return for using her voice.  She is assisted by some slippery, yet electrically talented eels, Flotsam (Emily Pace) and Jetsam (Jared Blount), experts in exporting evil ideas.

Ariel relies on Sebastian, as well as on Scuttle (Doug Ford) and Flounder (Ruth Daigle) to help her out.  The advice Scuttle gives is, on the surface, possibly bright. But his information about humans is remarkably dim, and Ford is adept at creating a wonderful humor about humans.  As a seagull however, he has a better understanding of humans than most of Ariel’s friends who are under the sea.  He meets with her on her frequent journeys to the surface to fantasize about being a human.  It is on one of these forbidden journeys that she rescues the young Prince.  Entangled within a rogue wave during a storm, Eric soon becomes entangled and enchanted with the voice of the beautiful mermaid who saves him, and sings to him.  Griffin Maxwell plays Prince Eric handsomely. The love between Eric and Ariel is clearly impossible, but very much in their dreams. His guardian, Grimsby, played by James A. Hughes, assists Eric.  Grimsby’s determination to see his ward married to the right kind of girl (royal) is quite amusing.  Equally amusing is Flounder, Ariel’s best friend.  Flounder wants to help her out, but he doesn’t want to lose Ariel to some silly human.  Ruth Daigle plays him delectably, even though (in spite of his name) he isn’t a flounder but a tropical fish!  Daigle employs a mode of transportation that is unusual and effective— and delicious expressions that are easy on the eyes.

The Ensemble members of the cast provide support, in song, in dance and in a great deal of humor.  The beautiful sisters of Ariel are Hannah Finnegan as Andrina, Phoebe Butts as Allana, Ellie Valdez as Attinal, Brooke Howard as Adellal, Megan Montgomery as Aquatal and Jessica James as Aristal.  Not only do they look and sound lovely, they have the typically loveable attitude that sisters the world over share.  Kaleb Bruza is marvelously comic in his role as Chef Louis as well as being an important part of the ensemble.  Joshua McGowen, Donegan Moore, Sarah Henry and Dakota Muckelrath add so much to the show supportively, skillfully and comically!  The entire cast of 22 exceptionally talented actors with all their skills in song and dance makes “The Little Mermaid” one of the most successful musicals from the Pollard.  “The Little Mermaid” is a children’s show and the primary criticism, must be from the reaction of the children present.  The show is a success if their attention is held.  “The Little Mermaid” holds more than their attention—the show draws them in completely. The children in the audience are spellbound, and responding with enthusiasm.  The only squirming that occurs for this relatively long children’s show is at intermission, and most of that is being done by adults!  The audience is thrilled and the audience connects, and that makes “The Little Mermaid” a spectacular success, the brilliance of the performances is just icing on a very delicious cake!

It takes skill to do justice to the wonderful work of Alan Menken, and the exceptionally witty lyrics by Howard Ashman and Glenn Slater.  The production is from the book by Doug Wright, based on the Hans Christian Andersen story, the film by Disney and its staged musical.  Stevenson and Stewart make a very wise choice to concentrate on substance rather than glitter, because the substance of the voices and the subtle grace of the dance, bring a glow to the production that is dazzling. The musical direction of Rebekah Bruce Parker who leads a small but talented orchestra; Parker and Joe Fitzgerald on keyboards, Jason Hunt on Bass, Gary Bruce on Percussion and Aaron Marshall on Drums is excellent. Chelcy Harrell’s wonderful choreography alongside the direction of Stewart and Stevenson simply adds to the glow. Costume design is the incredible work of Michael James who made the costumes simply gorgeous, some being simple and some more intricate and disarmingly menacing.  Joshua McGowen constructed puppets for the eels that work exceptionally well in the hands of Pace and Blount. 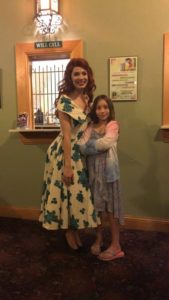 “The Little Mermaid”  runs through May 5, 2018.  Curtain is 8:00 pm. Everyone has a little girl in his or her life just dying to go (no matter how old her driver’s license says she is), though some younger ladies might prefer one of the Sunday 2:00 pm matinees so as not to lose beauty sleep. “The Little Mermaid” pleases adults as much as children. Humor is universal. So visit www.thepollard.org or call the box office, Tuesday through Saturday at 405-282-2800.