“Moonglow” at 3rd Act is Over the Moon is Excellence 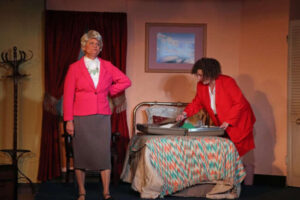 Can two elderly people who can’t remember each other’s names fall in love and share intimate meaningful moments?  Or, perhaps a better question is:  can anyone stay alive without a measure of contentment that comes from a sense of belonging?  The kind of ‘belonging’ in loving and being loved, being held and holding another.

“Moonglow” written by Kim Carney is a story of heartache, heartbreak, and heartwarming moments across generations.  Carney captures the essence of living in “Moonglow” as 3rd Act Theatre director Don Taylor captivates the audience.  The cast of seven creates the simple generational complications that evolve over time with generous understanding.  The result is a story told beautifully, with wit and humor. A long life can also lead to tragedy and one of the most difficult tragedies is Alzheimer’s.

Maxine is a vibrant, opinionated, and powerful woman who suffers from the horrors of Alzheimer’s, a disease that robs her of dignity, memory, and continuity.  Her daughter, Diane, can no longer care for her obstreperous mother and must forcibly place her in a facility that specializes in elderly dementia. 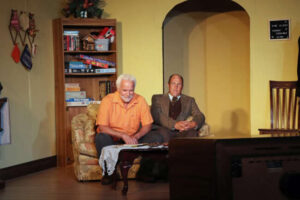 Rob May as Joe alongside son Greg played by Chris Briscoe, visiting Dad at the old folks home in “Moonglow”

Greg’s father, Joe, is a resident who decided to enter the facility as soon as he received the same diagnosis.  Greg believes he could have kept his father at home.  When Maxine and Joe meet, there are a few fireworks.  Maxine sees in Joe another man (Bob) she once fell in love with—and Joe sees the love of his life, Theresa.  The two of them re-create a past in which the young Theresa lives in Maxine’s face and the young Bob lives in Joe’s. Both are still young and vibrant, dancing through life to Artie Shaw’s rendition of “Moonglow.” Hit song of the 30’s and 40’s, “Moonglow” was written by Will Hudson and recorded by everyone.  (More recent recordings include Carly Simon and Rod Stewart in performance)

Jackie Smola is a veteran actress who plays the feisty Maxine as honestly as she does skillfully. Rob May portrays Joe: calm and courageous in his demeanor.  Complimenting their performances are those of Lauren Peña as The Girl and Dakota Lee Bryant as the Sailor. They are two young lovers falling for each other during the chaos of WW II.  The two weave into and out of the scenes with Joe and Maxine as the younger versions of the two elderly but vital residents—and, on occasion—they are also seen as Theresa and Bob.  The movements are seamless, as if a flowing garment slides gracefully across the floor as one actor replaces another.  While both Maxine and Joe are onstage at the same time as the younger versions, we hear both actors deliver lines that are just as perfectly synchronized as their movements.

Keeping the residents in line and fine fettle is Benita, manager of the Elder Care Facility.  Mikie Gillmore plays her with just the right amount of authority that’s also balanced with empathy and a sympathetic ear for family.  Diane, Maxine’s daughter, is played beautifully by Rosemary Orwig Rogers and Joe’s son Greg, played by Chris Briscoe, shows perfect pomposity. 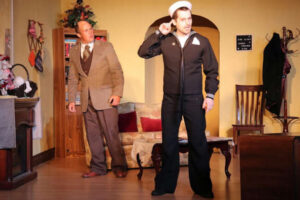 Chris Briscoe is astounded at his father’s exuberance as Dakota Lee Bryant as the Sailor steps in his dad’s persona…’what a dancer! and what a sailor!”

Taylor’s direction of these seven accomplished community theatre actors is inspired.  His sensitive handling of each character, and his precision in blocking the changes, reveals the devastation of this disease. As the characters remind the audience of the wit, vim, and vigor that pops up in unexpectedly precious moments of the disease, we feel Taylor’s balance.  The cast is perfectly chosen to illuminate the tragedy across all generations.

Carney set “Moonglow” in the late 90’s when it was written, but the story is timeless and will always be with us.  We hear about and hope for a cure’s for Alzheimer’s, a wonderful possibility, but dementia in the elderly comes in other forms as well.  It will remain relevant for some, as well as poignant for all. 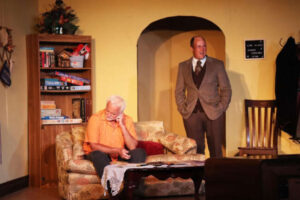 Rob May as Joe and Chris Briscoe as Greg in “Moonglow”

3rd Act Theatre is protecting patrons during the Covie-19 crisis with limited seating creating social distancing. The theatre also requires the audience to wear masks at the live performances, alongside their crew and staff.  The concession stand is closed. No food or drink is allowed in the theatre.  3rd Act has engaged in extensive sanitation measures for the safety and comfort of audience members.  “Moonglow” runs from June 12 through June 28, 2020.  Theatre performances are presented at the Shoppes at Northpark at 8:00 pm through Saturday, June 27. The address is 12040 N. May Avenue (122nd and N. May.) For those unable to attend in person, 3rd Act will present one live stream for the final matinee performance Sunday afternoon, June 28 at 2:30 pm.  For information and ticket reservations visit www.3rdacttheatreco.com or  visit 3rd Act on Facebook as well. All of us will surely step back into the thick of things (after quarantine) ‘swinging’ with Joe and Maxine to the music of their era.