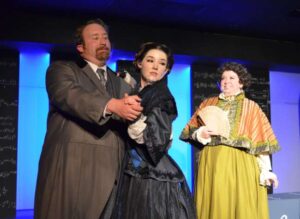 Lauren Gunderson is certainly one of the most interesting modern playwrights around.  Gunderson makes math romantic in “Ada and the Engine” currently showing at Carpenter Square Theatre.  Tom Cowley directs an impressive cast of four in this fascinating show.  The central character is Lady Augusta Ada Byron Lovelace.  She is a brilliant mathematician and makes her mark on the world during the early days of the Industrial Revolution in England.  She is married to a Lord Lovelace but her partner in science is Charles Babbage.  He developed several mechanical calculating machines, with different engines. The collaboration of Babbage and Lovelace was quite remarkable.  Ada Lovelace wrote a paper to accompany Babbage’s machine that detailed the operation…in short, the program.  While Charles Babbage is the father of the computer, Ada Lovelace is the first computer programmer.  None of the machines were ever built; the technology wasn’t quite ready in Victorian England.  But the incredible imagination of these two scientific individuals to have germinated the idea is amazing—since they did so 100 years before the modern computer age envisioned and actually made a computer. Tragically, Ada Lovelace died at only 36 years of age, the same age as her father, the great romantic poet, Lord Byron.

Kaylan Ferrell portrays the lovely Ada Lovelace who is not only a brilliant mathematician, but a secret romantic.  Although Ada Lovelace never met her father, one can see in her the influence of the romantic, and the incredible imagination coupled with scientific methodology that she embodied.  The play spans nearly two decades and Ferrell shows astonishingly realistic growth as she allows her character to mature naturally. 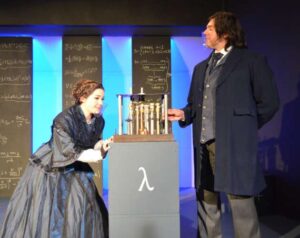 David Burkhart is Charles Babbage, a scientist who is also a dreamer.  His characterization is wonderfully ideal. Burkhart allows us to see the conflict  in his soul as he contemplates his colleague as the ideal partner.  Babbage remains a perfect gentleman, but one can see that his feelings for Ada go beyond those of a mentor.  The two of them have excellent chemistry, and an understanding of the characters and the age in which they lived.

Taylor Reich is wonderfully pompous and portly as Lord Lovelace.  Although clearly unhappy with the bond between his wife and Babbage, he clearly accepts the importance of their work.  Reich is the epitome of a typical Victorian gentleman.

He also appears as Lord Byron, a completely different character and in this role, he suddenly becomes the romantic seducer with a twinkling eye for the ladies.  Amazingly different.

Laurie Blankenship is Lady Byron.  She is haughty, proper and matronly. Her disapproval of her neglectful husband and his romanticism has made her bitter. She fears Ada’s absent father, Lord Byron, might exert his influence on her impressionable daughter.  She is absolutely certain that her opinions reflect appropriate behavior regardless of any information to the contrary.  Blankenship makes this dominating character understandable, but still not very likeable, a tall order but accomplished beautifully by a gifted actress.

Blankenship also makes a cameo appearance as the delightful friend of Babbage, Mary Sommerville.  She portrays Sommerville as a very pleasant and attractive lady, quite unrecognizable as the same actress.

Tom Cowley directs the play with clarity, guiding his actors into exceptional performances. Linda Cowley as Rehearsal Stage Manager and Ford Filson as Production Stage Manager are able assistants.  Blaine Denny runs the sound board with absolute precision following Rhonda Clark’s design.  Clark is also responsible for the beautiful costumes, while Ben Hall is always a brilliant set designer. Jay C. Schardt designs the lights and Barry Thurman is the audio-visual guru.  Scott Hynes constructed Hall’s set and the two of them painted it.  Clark and Linda Cowley handled the properties.  Altogether, Carpenter Square has put together an impressive crew undaunted by acts of God and the tough year we have all shared.  Often unmentioned are the efforts of folks behind the scenes. In this case Vikki Simer, as Carpenter Square’s Office Manager makes a very organized contribution.

There is one intermission that offers theatergoers time to examine David Burkhart’s beautiful photography exhibit in the lobby. His eye for composition is quite amazing. Clearly, he understands the viewpoint of the viewer in his photography as well as in his acting.  “Ada and the Engine” plays at Carpenter Square Theatre at 800 West Main in downtown Oklahoma City through May 1, 2021.  For tickets and information visit www.carpentersquare.com or call 405-232-6500.  This is a very entertaining and informative show that everyone will enjoy. 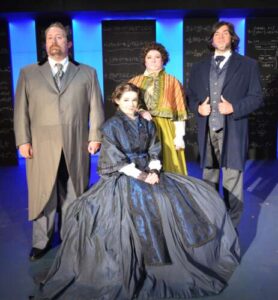 Cast of “Ada and the Engine: From left and standing are Taylor Reich as Lord Lovelace, Laurie Blankenship as Mary Sommerville, David Burkhart as Charles Babbage and seated at center, Kaylan Ferrell as Ada Lovelace. Photo courtesy of Carpenter Square.