XMAS: Consider Yourself DESTROYED… with LOVE 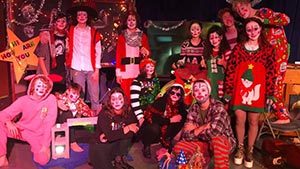 Christmas is the most wonderful, sparkly, expensive, stressful, exhausting time of year. It’s steeped in tradition and oftentimes, redundancy. Thank goodness for small favors, like turning off the 24/7 radio repetition of the same fifteen songs. And for the Thelma Gaylord Academy’s Rokademy Experiment, which sets out to destroy that traditional Christmas bore… with love, of course. This group of teens is led by Matthew Alvin Brown, and they’re a rockin’ band of musical masterminds. The one night only special Christmas concert features music by The Ramones, The Waitresses, The Wiggles, yes, and even an original tune written by the group, a fun ditty titled “Christmas Muscles”. The students in this genuine school of rock do it all- the singing, the instrument playing… the acting.

Originality is bursting at the seams, with fun costumes, vibrant makeup, tinsel and Christmas lights, and a Star Wars movie plays in the background on stage. Each song has a bit of dialogue in between, making it a theatre experience wholly developed from the minds of these free spirits. It doesn’t make much logical sense, but that’s not welcome here, and it’s all the more creative because of it. Parents and older Millennials, those thirty year-olds, are somewhat confused, definitely entertained, and nonetheless impressed with the talents on display. The music may be familiar, but The Rokademy’s renditions are new and different, each with a rock ‘n roll twist. This team of rockers has got the talent and energy to spare, and could probably jam out all night long!

With poise, professionalism, and rock star swagger, the performers of The Rokademy Experiment easily destroy what you’d expect from a regular old Christmas concert. They create a unique experience that is full of holiday cheer and new classics to the world of Christmas tunes. This crazy concert brings back that youthful excitement that is too often lost in adulthood. It’s refreshing and revitalizing to see young musicians given creative freedom to be themselves and make their own music. Kudos to Brown for paving the way for his students to explore authentic expression. When artists are given the space to be wildly original, there’s no telling what kind of deliciously magical fruit salad they’ll come up with. The Rokademy Experiment has effectively destroyed Christmas, with love, with music, and above all a lot of fun. And that is what the Christmas spirit should be about!