Whether you like it or not… HEDWIG Returns to The Boom 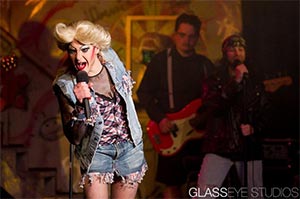 Internationally ignored yet universally loved, Hedwig and the Angry Inch is a hard-rock musical that takes no prisoners and makes its own rules. It is welcome in theatre much like its title character, Hedwig Robinson, makes her own way in the world; by not really fitting right in anywhere. Hedwig is born Hansel Schmidt, a gay man who faces a miserable fate in East Germany (remember THAT border wall?). Hansel is heavily influenced by American radio and learns the story of Plato’s Symposium, a tale that’s relayed in the iconic musical number “The Origin of Love”. This sparks Hansel’s lifelong search for his other half, the one who may have been separated from him due to the wrath of angry gods.

Persuaded by his American soldier boyfriend and his cold German mother, Hansel undergoes a sex change and adopts a new identity, marrying the soldier and becoming Mrs. Hedwig Robinson. That all fits into a somewhat tidy box, but for the fact that the surgery she never really wanted is botched, leaving her somewhere between a man and a woman. Then, her new husband leaves her for a man. And, as history reminds us, the Berlin wall comes down, proving with finality that the disasters she’s gone through in the name of love were all for naught.

Proving her resiliency, Hedwig doesn’t give up hope that she’ll find her other half. As she rebuilds herself and her life in Junction City, Kansas, she babysits, fronts a rock band, aptly named The Angry Inch, and launches a famous career for teenaged brat Tommy Speck. Hilarity and tragedy ensue, but don’t write Ms. Hedwig off just yet. Her story doesn’t truly begin until it’s seemingly all over for her. When she’s hit the lowest point possible, Hedwig and the Angry Inch becomes something you’d never expect. 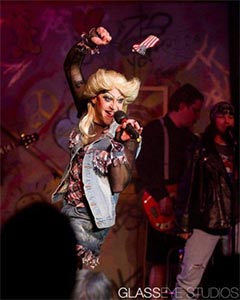 The show is setup like a concert, with Hedwig telling her story to the audience. In between timely comedic commentary and Hedwig’s verbal abuse of her tour mate and husband, Yitzhak, there’s really, really good punk-rock music, in the spirit of David Bowie and Iggy Pop. It’s androgynous, angsty and glittery music that rocks with lyrical depth. With a comedy routine, concert, mythology and monologue, it becomes something more than musical theatre. In short, Hedwig’s got layers. Layers that run deep, hiding underneath that giant blonde hair and sparkly blue eyeshadow.

The story of how Hedwig came about is as interesting as the show itself. By the time it debuted off-Broadway in 1998, Hedwig had lived as a drag/punk dive bar persona. Writers John Cameron Mitchell and Stephen Trask workshopped the character in the NYC nightclub scene where punk-rock cover bands, fronted by drag performers, reigned supreme. After years of development, Hedwig and the Angry Inch finally emerged and went on to achieve Obie Awards, a movie, a national tour, a yearlong Broadway run, and four Tony Awards. But where Hedwig truly thrives is in the margins. Originally a minor character in her own story, Hedwig finds a way to make you notice her. Her story must be told, and her truth shines through.

An anniversary of sorts, Matthew Alvin Brown and Renee Anderson are celebrating almost a decade of performing the show together. Brown as the heroine Hedwig and Anderson as the man of few words Yitzhak. Likewise, The Boom is celebrating ten years in their current space, and the 39th Street stage is the first place Brown and Anderson collaborated on the musical. After spending years performing the role in and around OKC, Brown says the homecoming to The Boom “provides the perfect space for Hedwig”. It’s tight, the tables are close, and it demands an immediacy of the audience that more traditional stages don’t allow for. Hedwig is stalking Tommy’s more successful tour, performing wherever she can and riding a short wave of fame and scandal, so the authentic feel of a smaller space is ideal. 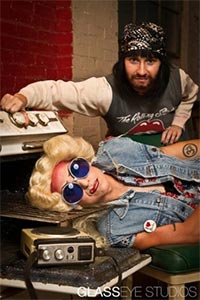 Brown and Anderson’s partnership and years performing together bring a richness to the roles and a familiarity with their characters.

In a recent interview discussing the role of Yitzhak, Anderson says “I enjoy the many challenges of playing Yitzhak. I must make the audience believe that I am a male and in that I have to physically carry myself that way. Yitzhak also has very little to say in the show as far as dialogue is concerned, so I feel I must work a little harder than usual to visually convey the complex emotions that Yitzhak feels. I have to get the audience to ‘listen’ to me with little dialogue. The way I move and facial expressions are very challenging, but I really enjoy it! As cliché as it sounds, I feel my own personal life experiences have helped me dive deeper into playing Yitzhak. It’s been over 8 years since I first became a part of the show and a lot can happen in that time to help one grow as a person and an artist.”

Anderson agrees that the show is universally appealing, resonating with diverse audiences. Anderson adds “I believe most people root for the underdog. Whether it’s rooting for Hedwig because of Tommy’s notoriety, or rooting for Yitzhak because of Hedwig’s control, by the end of the show the underdogs have essentially won, and who doesn’t love that? And who doesn’t resonate with kick ass rock music?”

The band includes Jason Hunt on guitar and keys, Larz Justice on bass, Tristan Gfeller on guitar, and Aaron Marshall on drums. Hunt serves as music director and Brown is production director.

Posted in Features, 2019, This Season | Tagged The Boom, Hedwig and the Angry Inch
Search
Categories