We’re All Plane People, and We All Come From Away 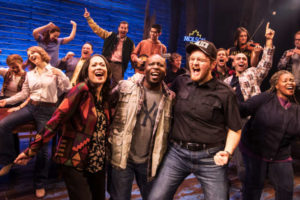 The North American Tour of Come From Away. Photo by Matthew Murphy.

September 11, 2001 is a day the world changed forever. Those who remember it consider it a dividing line. There is now only pre 9/11 and post 9/11. Those who were born later grew up in a world where the ideas of terrorism, Xenophobia, and fear of flying are a part of our daily lives. On the day the world changed, commercial aircraft bound for the U.S. were diverted to Canada for safe landing while the U.S. air space was under attack.

Come From Away tells the true story of a small town in Newfoundland called Gander where 38 planes were diverted for emergency landing on September 11th. The town of 9,000 opened their community and homes to 7,000 strangers. The travel industry was in chaos, and the world was in turmoil. But the people of Gander found a way to make a community for themselves and the “plane people” who were brought there by horrible circumstances.

Oklahoma City is no stranger to terrorism. It seems a fitting combination that the Come From Away national tour stops in Oklahoma City, a place so deeply affected by acts of hate. Oklahomans simply can’t think of 9/11 without recalling what we went through on April 19th, 1995. To commemorate one is to remember the other. We have much more in common with the people of Gander than we realize, and the emotions are high as we relive two of the most horrific tragedies our country has ever seen, one right here in our own city.

This cast handles the difficult subject matter with great appreciation and sensitivity. They all play multiple roles, switching costumes and accents on stage as the musical continuously flows. Marika Aubrey is Captain Beverley Bass, Annette, and others. Captain Bass flew for American Airlines as their first female captain and was flying Paris to Dallas on September 11th. Aubrey is a powerhouse, a strong female lead with a tender side. Captain Bass is a galvanizing figure. Responsible for her plane, keeping her passengers calm, and trying to get in touch with her family, her story is complex and unique. The pilots and air crews suffered a different kind of tragedy on 9/11. The attacks were personal in a way that nobody else experienced. The terrorists hijacked planes and crashed them into buildings, changing aviation as we know it forever. With her livelihood and lifelong passion under attack, Captain Bass still has to remain calm and get her passengers back home somehow. Aubrey shows a deep commitment to her passengers and her career. Her song “Me and the Sky” is a late number that leaves no dry eyes in the house. 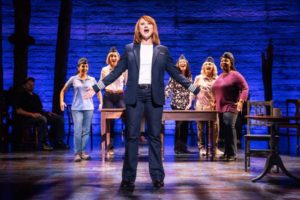 The North American tour of Come From Away. Photo by Matthew Murphy.

Julia Knitel is Janice and others. Janice is the town’s only journalist. Knitel is quirky and quick on her feet, a journalist who’s doing the best she can with the unusual and tragic circumstances. Sharone Sayegh is Bonnie, a local member of the SPCA and a true voice for the animals left on board the 38 planes. Sayegh is comedic relief for the weighty circumstances. She makes a sympathetic sight, breaking into the airport to rescue animals in the cargo holds.

Danielle K. Thomas is heart-wrenching as Hannah. Her son is a firefighter in New York City, and she anxiously awaits news of his whereabouts. Being so far away, in a place they never meant to land, only adds to their longing for home. Thomas bonds beautifully with Julie Johnson as local Ganderite Beulah. Beulah’s son is also a firefighter. While they wait and pray, they share stupid jokes to make each other laugh, and form an intimate and powerful connection. Hannah too is a real person, represented and honored here for her story. She also represents the first responders and the life-altering events they went through that day and in the following years. Hannah and Beulah remain friends to this day.

Brandon Springman is Oz, the Gander policeman who, like everyone in Newfoundland, drops everything to help the “Come from Aways”. Loyal and hardworking, Oz is an everyday hero. Springman is a standby performing in the role, and he’s a welcome addition to the cast of 12. Another standby performs as Kevin T/Garth and others. Aaron Michael Ray is hilarious as one of a pair of Kevins. Partners in business and in life, the Kevins face harsh truths about their relationship while they wait out their time “on the edge of the world”.

Nick Duckart is his partner Kevin J. Duckart also portrays Ali, an Egyptian and chef who’s stuck in Gander at this, the emergence of a new level of Xenophobia, particularly in the United States. Duckart is heartbreaking in this role. He represents all the people who were suddenly perceived as “threats” to the U.S. Normal citizens who were traveling, who lost loved ones, and who suddenly could never truly come home again. Duckart’s performance is a standout in a cast of distinctive talent.

Christine Toy Johnson is Diane and Chamberlee Ferguson is Nick. This real-life couple met in Gander, and the innocent way their flirtation plays out reminds us that life can still be beautiful and hopeful even in the face of tragedy. James Earl Jones II is Bob, a New Yorker displaced in Gander. Bob is naturally wary but comes around in the most touching way. Jones II has levity and humor, a relatable and natural Everyman. 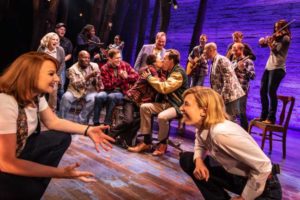 The North American tour of Come From Away. Photo by Matthew Murphy.

Kevin Carolan is the true hero as Mayor Claude. Claude is instrumental in getting the “Come from Aways” off the planes and into a school gym for shelter. Carolan portrays a Ganderite through and through. He’s honest, resilient, and full of humor and heart.

Come From Away does not stop moving. It flows seamlessly. The set is paired down to 12 people and their chairs, and with minimal props and no distracting lighting or effects, those 12 tell a beautiful and honest story. It’s one that shows the power of what happens when we simply reach across and help our neighbors in need. It’s storytelling at its finest, and other grand-scale, technical marvels on stage should take note.

Christopher Ashley won a well-deserved Tony Award for Best Direction, and Kelly Devine was nominated for Best Choreography. In all it was nominated for 7 Tony Awards, and lost the Best Musical accolade to Dear Evan Hansen. (Hansen will come to OKC next season, at which time OKC audiences can determine if it deserved to edge out this deeply moving story).

Come From Away celebrates the best of humanity at the worst time in history. The people of Gander remain humble and still hold that they’re just doing what anyone would do. They opened their homes and shared their food, clothing, shelter, and families with people who never would’ve thought to come there. For five days, different cultures, religions, nationalities, races, and personalities meshed and found common bonds.

Come From Away restores your faith in humanity. It teaches us the most important lesson, one we in Oklahoma City know all too well. That in the face of the worst kind of hate, love will always win.