“Wait Until Dark” A Near Miss with Great Possibilities 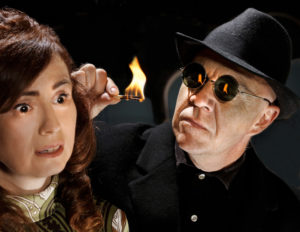 “Wait Until Dark” is a frightening suspense thriller written by Frederick Knott, first performed in 1966.  Knott is noted for his rather convoluted mysteries designed to terrify and confuse.  “Wait Until Dark” tells of a young blind woman who becomes trapped in her apartment and besieged by nefarious forces.   The woman is Susy Hendrix and she’s married to a traveling photographer, Sam.  Susy has adapted well to her blindness getting about with ease, and her husband is careful to see that she is fully prepared before he leaves.  The only other apartment in the building is occupied by a woman and her 10 year old daughter, Gloria, who often helps out.

Today it would be folly to agree to bring a package from Montreal to New York at the request of a pretty woman. In 1966, it is merely the act of a rather naïve gentleman, such as Sam.  He brings home a doll that a woman requested he take to a young hospital patient, but later when the woman tries to get the doll, it cannot be found.  Almost the moment Sam is out the door for another meeting, Susy has two callers, a couple of con men.    One of them is a fellow named Mike Talman who claims to be an old friend of Sam’s and insists on helping Susy as the events unfold.  The other is his partner and he pretends to be a sergeant in the police force investigating the death of a woman whose body was found near the apartment building.  These two are then forced to work with a devious murderer who ‘recruits’ them into helping him find the doll.  Mr. Harry Roat Jr. wants that missing doll and the contraband inside and he will stop at nothing to get it.  As the story builds, Susy must find the doll depending on the assistance of her husband’s friend.  His betrayal leaves her in desperate circumstances but she finds a way to level the playing field with a lot of help from Gloria.  She uses her heightened senses and some judicious fiddling with the fuse box to save her life.

The production is directed by Don Taylor, a credit to his craft.  He has directed many successes at Jewel Box Theatre as well as other theatrical companies.  His acting credits are extensive and he is noted for his creative instincts.  The performers in “Wait Until Dark” are Christine Lanning as Susy, David Fletcher-Hall as the dastardly Mr. Roat, and the two slightly benevolent con artists are Justice Wickstrom as Mike Talman and Johnlee Lookingglass posing as Sgt. Carlino.  The precocious Gloria is played by Rayne Caldwell and Sam Hendrix is portrayed by Kevin Moore.  Chris Rice plays the genuine policeman who shows up at the end.

Any viewer would be hard-pressed to imagine a better cast for the show, or a better director, nevertheless, the suspense thriller is more ‘camp’ than chilling.  Lanning’s skill as an actress is profound; she understands the movement and look of a blind woman with perfect accuracy, her portrayal in that sense is superb. Beyond that, her character is somewhat flat yet simultaneously inconsistent.  Her pitch never varies, and her vocal range tends to be persistently shrill.

Fletcher-Hall is one of Oklahoma City’s premier performers and he is known for delivering a complete character.  In “Wait Until Dark” his menacing demeanor is excellent, but he never develops into the truly terrifying killer before the being interrupted. The two con artists seem too timid to lure poor Susy into trusting them.  The dialogue suggests sympathy between Susy and Talman, yet he gazes at her only with fear that she will ‘see’ through him.  Lookingglass has a delightful creepy look, but he never suits the look to an intimidating action. Caldwell’s Gloria is also unwavering and flat especially for an impish little girl.  Kevin Moore as husband Sam plays him in a rather avuncular fashion, as if he were a patient elder brother rather than a loving husband.  Chris Rice only appears briefly at the end, but he seems to be as the author intended.

All of these actors are established talents working under a competent director, so “Wait Until Dark” is surprisingly awkward.  The lack of character connection is partly to blame, but the blocking is also problematic.  Much of the crucial action takes place in low-light conditions, so it is very unfortunate that it also takes place in a cramped area so far upstage that it is nearly off-stage.  “Wait Until Dark” abounds with excellent acting and poor reacting. The single most terrifying moment of the show is at the end, when the lights come up after the curtain call. It is the fear that the talented Don Taylor has been possessed by Ed Wood.

“Wait Until Dark” plays every weekend, Thursday through Saturday night at 8:00 o’clock with a Sunday 2:30 o’clock matinee.  The Jewel Box Theatre is located at 3700 N. Walker, an attached building just north of the main church Under the Dome—the First Christian Church.  The website to visit for tickets and information is www.jewelboxtheatre.org or simply call the box office Tuesday through Saturday afternoon at 405-521-1786.  They are so close!