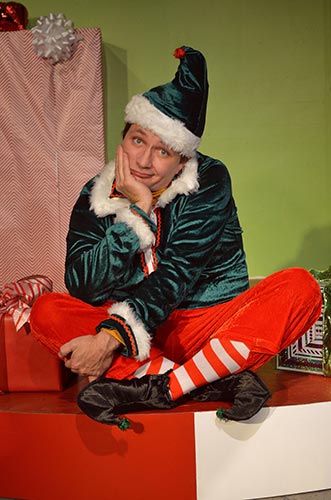 Linda McDonald directs C.W. Bardsher as the elf, an out-of-work actor new to the New York scene.  After three weeks in the Big Apple, the poor fellow has yet to be discovered and finds himself out of money and prospects when he sees the ad for Santa’s helpers.  It’s hard to become an elf at 33 years old, but, this hapless young man is an actor and knows he can fulfill elfish duties for Santa and the families visiting Macy’s at Christmas.  The application/interview process is as involved and detailed as one would expect from the CIA, but he succeeds in becoming one of Santa’s elves.  He chooses the name Crumpet for himself and tells the audience stories of interesting and unique children, their shenanigans, the antics of their harried parents, and the sometimes outrageous behavior of the other elves and Santa’s Crumpet works with. 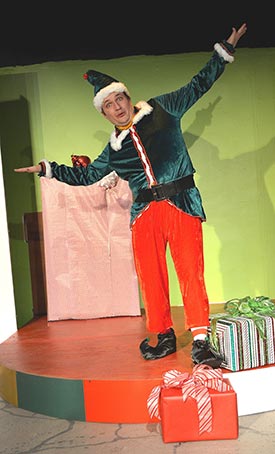 Anyone who has ever been an elf has a harrowing story to tell that others seem to find hilarious, and Crumpet has a plethora of them.  Each one is more amusing than the last.  There is no Christmas spirit in Santaland, there is no joy in giving, no celebration of life, no meaning in the Christmas story, but a lot of what Christmas is often really about for many people-crowds of people waiting in line with anxious crying children and overwrought parents with much too much to do.  Crumpet manages to keep everyone as happy as possible helping Santa, and getting the children reunited with their parents after their tearful, fearful Santa lap disaster.  Pictures are taken amidst the tears, but Crumpet keeps on smiling, and the audience keeps on laughing as he acts out his stories with a little help from the pipe secreted in the supply closet.

Will no one find the joy in Christmas, the meaning of Christmas, or share an abiding love of all the children of God, brothers and sisters to the child who was born and caused this celebration?  Yes, they will.  Even Crumpet.  But not until everyone has a good laugh at his expense.  There are stories told that often end with the simple phrase ‘You had to be there’ and that is true for “Santaland Diaries” you just have to be there.  Where?  This year a section of Macy’s in New York is recreated by Ben Hall at Carpenter Square Theatre.  The address is 800 West Main in downtown Oklahoma City.  “Santaland Diaries” shows November 29th through December 21, 2019. The season is expressed by the generous efforts of costumer Rhonda Clark, stage manager Rosemary Waits and sound designer Mark Fairchild as well as Ben Hall cheerful set.  Of course the excellent director’s touch provided by Linda McDonald and the strong delivery by C.W. Bardsher are crucial to the process.  Bardsher delivers a delightfully un-delighted elf in this gig, and if wonders never cease—well, you just have to be there.  Show times are 7:30 pm for Thursday performances and 8:00 pm for weekend performances.  The Sunday matinee December 15 is 2:00 pm.  Call 405-232-6500 for tickets or visit www.carpentersquare.com for more information.  You really have to be there. 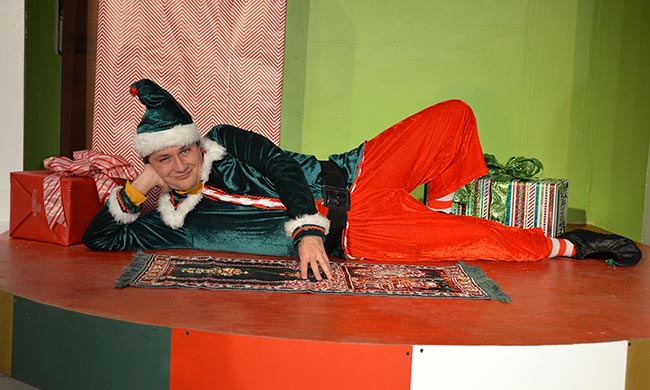