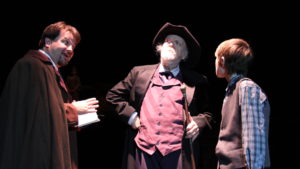 The Pollard Theatre in Guthrie, Oklahoma celebrates the Christmas season once again with “A Territorial Christmas Carol,” directed by the incomparable W. Jerome Stevenson.  The tradition is an important one for resident and visitor alike.  Childhood memories of seeing this marvelous show abound, and there are many fond remembrances of child cast members who grew up with the show, with Ebenezer Scrooge and Tiny Tim.

In 1987, the theatre sought out noted author Stephen P. Scott looking for a Christmas presentation that was distinctive and unique like the classics they remember.  Charlie Suggs, Production Director and founding member of the Pollard’s resident company, came to Scott in August of that year. Scott, noted for his ability to meet tight deadlines, came up with an initial script, an adaptation of Dicken’s mid-Victorian novel, ‘A Christmas Carol.’  By October, the show was in rehearsal and Scott was fine-tuning the script and working along with the cast.  Scott actually operated the revolve during this first production.  By New Year’s Eve, everyone at the Pollard as well as in the community knew that “A Territorial Christmas Carol” was not only a hit, but that a tradition had been born.

As it is impossible to improve upon Charles Dickens, Scott kept the masterpiece intact while encompassing a territorial connection that resonates.  In 1893 a stranger passes through the territory, taking shelter at the home of a homesteading family, the Moody’s, as they celebrate their first Christmas near Guthrie, the First Capital of Oklahoma.  The stranger, known only as Charlie tells the Moody family the beautiful story written by Charles Dickens.  Suddenly this classic tale of Christmas in the London of the Industrial Revolution becomes the story of Guthrie residents.  In “A Territorial Christmas” Scott brings Dickens home to the territory where he belongs. 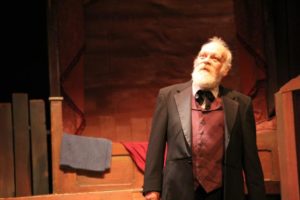 No character has been more beloved than James Ong, a contemporary and dear friend of Stephen P. Scott.  Ong has played Ebenezer Scrooge for nearly 20 years, bringing tears of joy and Christmas cheer to everyone seeing or involved with this show.  As 2017 draws to a close it is time for Ong to take down his own bed curtains and let another Scrooge become the adored character that he has become.  While Ong is retiring from the role of Scrooge, he is certainly not retiring from the stage and will be in rehearsal the first week of January for his newest project.  Scott, returning to the Pollard for the opening night of “A Territorial Christmas Carol” marvels at his friend’s ability to turn his words and the words of Dickens into wonderful Oklahoma tradition and is delighted in the audience reaction. “A Territorial Christmas Carol” is a show that has many patrons turning to family and friends, embracing one another, wiping the tears from their eyes and laughing with exuberance at Ong’s magical transition. The moving alteration from obstreperous curmudgeon so hurt by life that he cannot relate to others is to a man choosing to live with joy and helping others as he helps himself to be kind, generous, thoughtful and amusing.

In addition to Ong’s delightful performance the cast of ten adults are all wonderfully in tune with their roles. James A. Hughes plays the dual role of Bob Cratchit and Ben Moody.  Cratchit is the unfortunate clerk working for the miserly Scrooge; Dickens version of the abusive boss.  Moody is the creation of Scott for “A Territorial Christmas Carol” and while the two families are similar, Moody is far more independent and self-sufficient; in short, he is American.  Hughes plays each head of household distinctly, yet there is a similarity that reveals the underlying excellent moral character of both men.  Freedom makes all the difference!  Hughes also has a great deal of fun as Mr. Fezziwig, the boss that Scrooge should have emulated.  When an actor is clearly having fun, the audience does as well!

Megan Montgomery is Elizabeth Moody and also Mrs. Cratchit, and her characters, like Hughes, are similar yet separate.  In both instances the two make a very loving couple and excellent parents.  Their nobility of spirit is apparent and adds to their performance.  Montgomery also plays Mrs. Dilber in a later scene, and this character is completely dissimilar!  Scrooge has a nephew, son of his deceased sister, Fan.  Joshua McGowen plays Fred with the wisdom that Scrooge has dismissed and his refusal to follow the miserly footsteps of his uncle is nicely done.  McGowen also plays Scrooge as a young man, and initially he is quite similar to the Fred, but the turning point when he begins to worship gold is pronounced.  The two roles are nicely done!  Also McGowen takes on the cameo role of the underhanded undertaker, another fun character that McGowen takes full advantage of exposing.

The roles of Belle, lost love of Ebenezer Scrooge and Patience, found love of Fred are both handled by Emily Frances Brown with a great deal of grace.  The two women are virtually and deliberately the same character, but Belle represents regret and Patience represents fulfillment.  In youth, Patience is a little flighty, Belle does not have that luxury and Brown capitalizes on the difference with skill.

Ellie Valdez has many roles, The Widow Brown, a Party Guest and the Maid.  These three entirely different characters are interesting and diverse.  As the widow she is tragic, and suddenly her deliverance is very effective.  As the maid, she provides a great deal of comic relief and the moment when the maid and the laundress (Trinity Goodwin) join the undertaker, (McGowen) to sell their macabre ill-gotten gains to the pawnbroker (Jared Blount) is quite hysterical.  Valdez inspires a slightly disturbing and rich atmosphere as she gains her modest riches.

Timothy Stewart has a wide range of abilities, and is the bridge connecting the story written by Dickens and the adaptation by Scott.  He is also an important connection between ethereal beings and mortals.  Dickens relates the story of “A Christmas Carol” as if it were written by another, and as the storyteller he narrates the action.  He steps out of this role to portray Topper, a little tongue in cheek, but never foot in mouth!  Topper is quite the amusing gentlemen in contrast to Dickens kindliness and Stewart makes the transition clear and convincing.  Once Charlie the storyteller is suspected of being Charles Dickens himself, we realize that there are five spirits in “A Territorial Christmas Carol” rather than the four in Dickens novel.

The most frightening specter is, of course, the Ghost of Jacob Marley.  Dakota Muckelrath is the dreadful spirit and the weight of his chains is reflected in his attitude as well as his stance.  His voice is heavy and his movements are strained; it is a very realistic portrayal.  He also plays a territorial resident, John Kettle with a much lighter and refreshing demeanor as well as the Veteran mired in debt.  It is amazing to discover that one man is all three personas, the differential is so profound.

The Ghost of Christmas Past is portrayed by Trinity Goodwin, beautiful, serious and elegant.  This is a ‘plum’ role for any actress and Goodwin certainly does this spirit justice.  Goodwin also plays Caroline and Fred’s sister-in-law, Verity.  As Verity Goodwin is bit sillier than her sister Patience, and her mannerisms are very funny.  Her relationship with Stewart’s Topper is also quite humorous.  As Caroline, she is another victim of Scrooge’s unfeeling business practices and her depression and then release is displayed with a more restrained joy.  She also has a nice camaraderie with Muckelrath as the struggling veteran soldier.

The Ghost of Christmas Present is not so flamboyant a spirit; Jared Blount gives this apparition a slightly professorial air and this commanding approach really makes Scrooge take notice of his words as well as the vision the spirit brings.  Blount is ageless and timeless and his disappointment with man’s inhumanity to man is shaming.

There are nine children in “A Territorial Christmas Carol” and fourteen players playing alternate evenings. There are the four Cratchit children, Peter, Martha, Belinda and Tiny Tim.  There are also several children in Guthrie, the capital of the young territory who are all excited about Christmas.  Some of the roles are double cast as well.  The Moody family has one son still at home, William, the boy Dickens tells the story about this special Christmas.  Also Scrooge has a sister, Fan who does not live long but leaves behind his nephew, Fred.  Seeing performances with both casts of children, it is amazing to note how distinct each cast performs.  The effect on the adults in the show is remarkable.

Cast A children create an atmosphere of sweetness and wonder at the world, whereas Cast B children are more grounded and bring an air of seriousness to the production that has a starker effect.  In both casts the character of William Moody sets the tone and Peter Cratchit carries that tone throughout.  Cast A has Michael James as William Moody and Peter Cratchit and Cast B has Dawson Claxton as William and Peter.  James is younger, and although quite the young gentleman in both parts, his naiveté is unaffected.  Claxton is a little older, and appears more mature-almost jaded-and his endeavor to be a responsible young man and student are apparent.  Emma Poindexter of Cast A is Martha Cratchit and sister Fan while Ella Latham of Cast B is Martha and Fan.  Both are lovely and demure young women.  Ireland Riley from Cast A is Belinda Cratchit, and a child in town and Chloe Davis from Cast B has the same role. Nash Huskey from Cast A and Michael Alspaugh from Cast B are both delightful as Tiny Tim, both full of boundless energy that can’t be expressed, differing in that Huskey is more irrepressible and Alspaugh is a little more serious and sedate.  Tyeson Martin, Jackson Daigle, Ruth Daigle and Trinity Rutledge are Cast A children in various roles and Jaxon Pickens, Blythe Sousa. Gabrielle Alspaugh and Sydney Starr are from Cast B in these multiple roles.  Olivia Riley of Cast A, and London James of Cast B are both adorable and precocious little girls, in their own unique manner that nearly steal the show when they meet Scrooge!

As the New Year begins W. Jerome Stevenson will be preparing for “A Few Good Men” directed by Linda McDonald and James Ong will be preparing for his next endeavor while Stephen P. Scott will be busy writing his fantastic science fiction novels such as “Adamanta” as well as the series “Eaters” and “Eaters Too” and the recent “My Year in the Barrel” among others.  In one year there will be a new actor to play Ebenezer Scrooge, and he will draw us into the wonderful worlds of Dickens and Scott with his own unique joy and talent, becoming as cherished as James Ong.

The two casts alternate evenings during rehearsal and performance, with Cast A opening on Friday, November 24, and Cast B following on Saturday, November 25, 2017. To be sure of catching a performance of a particular cast member, double check their appearance with the box office at 405-282-2800 while making reservations.  Also visit www.thepollard.org for tickets and information.  Curtain is at 8:00 pm evenings with numerous matinee performances, including Saturday’s at 2:00 pm.