Urinetown is The Place to Be! 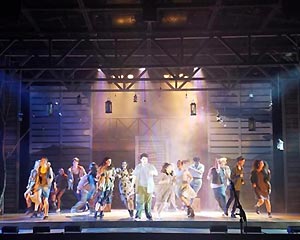 Urinetown: The Musical brings us to a not-so distant dystopian future where vital natural resources are in desperately short supply. The citizens who live in this dusty world must stand in line for hours each day, scraping pennies to use the bathrooms. Public facilities are closely monitored, and big business runs the show. Lyric Theatre’s Thelma Gaylord Academy presents this musical with all its wit, irreverence, and surprisingly poignant statements regarding the lifestyles we lead and take for granted every day.

Logan Boyd is Officer Lockstock and the narrator of the show. Boyd is the fourth wall breaker. He talks directly to the audience, reminding us that we’re witnessing a terribly unhappy show with an even worse title. Boyd is boastful and funny, smoothly transitioning from distinguished narrator to Officer Lockstock. Boyd’s onstage interactions with Delaney Horton as Little Sally bring a smile and a bit of levity while they deliver the bad news. Horton likewise is a comedic gem. She’s charming and sweet, with a powerhouse singing voice that’ll knock your socks off. Sarah Teel is Penelope Pennywise and she runs Public Amenity Number 9, alongside Briam Zuniga as Bobby Strong. Teel is crazy-eyed and mad, wielding her plunger as her scepter and demanding adequate payment from even the most pathetic townspeople in line. Teel also is an amazing singer. She commands the stage with vocals so powerful you can almost feel them.

Zuniga has hilarious chemistry with Emily Trnka as Hope. Inspired by his love, Zuniga rouses the silty townsfolk into an inspiring rebellion. Trnka’s Hope is idealistic and privileged, the only character who lacks self-awareness. Trnka bounces along, blissfully unaware of the realities surrounding her. But realization kicks in, and she’s the one nobody expects. No damsel in distress, Trnka becomes the heroine and symbol of the rebellion. Zuniga maintains his tongue-in-cheek hilarity, seeking the greater good and Hope’s affections until the bitter end.

Nicodemus Meade-Greenman is perfectly villainous as Caldwell B. Cladwell, the businessman in charge of keeping the people down. He’s vile and wicked, and clearly has no qualms about his own corruption. Meade-Greenman delivers his dialogue with a sly smirk and a smooth drawl. Donning all white with a black bolo tie, he’s reminiscent of Colonel Sanders, just quite a bit greasier. 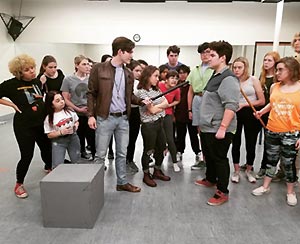 The dance numbers are complex and intricate, fairly comparable to the likes of West Side Story and Singin’ in the Rain. This large ensemble cast performs some tricky numbers. They make it look easy and have fun all the while. Noteworthy also is the vocal arrangement of the cast. Their harmonies are magnificent. This show is quite ridiculous and silly, but the cast is nonetheless impressive in their talents.

The Urinetown Band is made up of Kevin Smith on Keyboard, Dillan Francis as Woodwind Specialist, Nathan Walyer on trombone, Jasmine Mohammadi on bass, and Aaron Marshall on percussion. Nicholas Bartell directs this fun and poignant show. Kevin Smith is music director, and Sheridan McMichael choreographs.

Urinetown is a great experience for the students and the audience. The talented performers get the experience of working as a group, getting their timing down and stretching their comedic muscles. And the audience gets to see the polish and poise of the finished product; a hilarious musical that has been fine-tuned and perfected with lots of hard work and rehearsal. The students put on a wonderful, uproarious show. Don’t let that “awful” title fool you. Urinetown is the place to be!