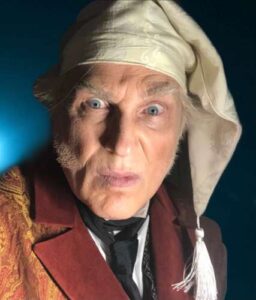 Lyric Theatre presents Dickens beloved classic, “A Christmas Carol’ for the tenth anniversary presentation with a twist.  Not the Oliver kind, but a Dickensian twist of venue! The play is at Harn Homestead in Oklahoma City: a location that enables the audience to view the play outdoors.  The scenes take place in the various locations found at the Harn Homestead which makes the audience move from locale to locale as the scenes change.  The show is surprisingly adaptable to all the scenes being presented with the story’s complete integrity and alignment in the outdoor locations.  There is song as well as magic in the production.

Usually Lyric double casts the children in the production for a Holly cast as well as an Ivy cast. However, this year the entire cast is doubled, allowing for greater control over any potential contamination by reducing the actors’ exposure to Covid-19.  The two casts are referred to as the Holly cast and the Ivy cast .

The complete Holly cast opening November 5, 2020 alternates with the Ivy cast.  This review will concentrate on the Holly cast and will be updated with more complete review after the Ivy cast is seen later.  Both casts are co-directed by the talented Artistic Director, Michael Baron and his equally talented sidekick As sociate Director Ashley Wells. As the actors are presenting outdoors, there is no necessity for them to be masked.  Social distancing is always maintained between audience and performer and is greater than 6 feet.  However, the audience is required to wear masks and to be responsible for their social distancing, which is easy to do in the outdoor location.  It is also very easy to see the action in this performance at all times.  Baron and Wells have made a few changes since opening.  At the beginning of the show the audience is separated into 4 groups, each led by their own Lamplighter.  This makes it much easier for the audience to move about without compromising social distancing. 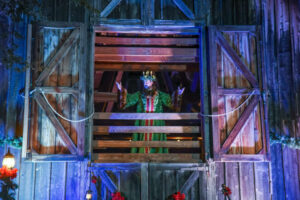 Leading the performers in the Holly cast is the incomparable W. Jerome Stevenson as Ebenezer Scrooge.  His interpretation translates beautifully to the outdoor setting and is delightful in all respects.  Stevenson has had a great deal of experience in a variety of roles and his versatility creates a Scrooge that is very off-putting, the sort of man disliked by all, the sort of man who dislikes all because he is has lost himself.  The transition that Scrooge makes as he visits with each spirit is most heartwarming and real.  He does this without changing his personality, just his outlook that becomes as bright as it once was—as his happiness becomes apparent to all.

The Ivy cast is led by Jonathan Beck Reed.  His Ebenezer Scrooge is quite different from Stevenson’s characterization.  Both interpretations are valid, both are exactly right.  Before enlightenment, Reed’s Scrooge is more aware of his own miserly attitude, but he still sees nothing of his misery.  Reed’s Scrooge has snide streak in his character which lends an interesting element of humor.  Both Stevenson and Reed arrive at the stage of greed that requires the drastic measures the spirits use to teach Scrooge and the audience.

Andi Dema is Fred, the Holly cast happy-go-lucky nephew who sees the real Scrooge hidden away and is determined to send his good wishes to Scrooge unrelentingly every Christmas season.  His joy is infectious and his delight at his uncle’s transition is superb.

Matthew Alvin Brown is the Ivy cast nephew Fred, a little more tongue in cheek nephew.  While Fred is determined to love and inspire his uncle to keep Christmas, Brown’s Fred seems to enjoy doing so because it bugs Scrooge as well! 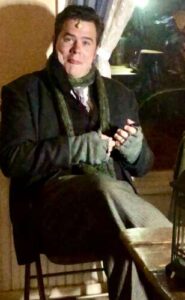 With the Holly cast, Charlie Monnot is always a superb Bob Cratchit and Mateja Govich is wonderful in a number of roles, but most evident as the Ghost of Christmas Present.  Lexi Windsor, and Susan Riley are again irrepressible in their roles and their charm is evident throughout the production.  Stephen Hilton and Chris Shepard are  excellent as usual.  Kristen Küns as the Ghost of Christmas Past is always expressive.  Kinley Sharp, Samantha Rother and Saxon Neal round out the slightly smaller cast.

Jason Bias is Bob Cratchit in the Ivy cast, and once again a wonderful interpretation that works well with Reed’s Scrooge.  Jessica Tate is the Ghost of Christmas Present, and her presentation is striking. Brenda Williams is always a notable Mrs. Dilber and Jennifer Teel is a delightful Mrs. Cratchit for the Ivy cast.  Interestingly the Cratchit daughter, Martha, is played by Teel’s daughter, Sarah Teel.  The mother/daughter combination works as well in fiction as in life.  Rodney Brazil and Jackson West are also excellent.  Brazil’s Marley is commanding while Holly cast’s Stephen Hilton’s Marley is more entreating.  Ivy cast West as young Scrooge is just as compatible with Reed as Chris Shepard is appropriate for Stevenson in the Holly cast.   The Ghost of Christmas Present is Emily J. Pace.  She is quite the sophisticated pixie–a little different from the adorable Holly cast Kristen Küns.  Both of them are marvelous.

Lantern bearers or Audience Hosts for the Holly cast are Carter Haney, Crayton Haney, Maurice Quintel Simmons and Hanna Dedmon.  They do an excellent job of shepherding their flock (the audience) from place to place, watching out for our welfare and assisting us in social distancing. 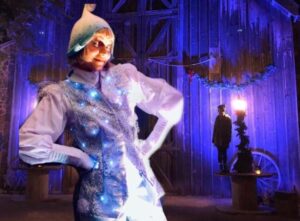 Lantern bearers or Audience Hosts for the Ivy cast are Reece McAbee, Jaylynn Nash, Dustin Boatright and Makenzie Boatright. Shepherding their flocks from scene to scene with each host responsible for a group allows for a little more interaction with the host, rather than too close an interaction with another audience member.  Social distancing is much easier without becoming an impediment. 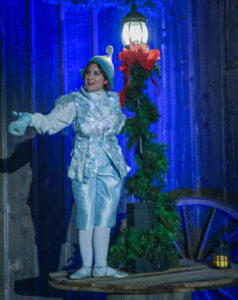 The cast performs beautifully although Tiny Tim tends to be a trifle wooden.  The Holly cast members are the first cast to work with this Tiny Tim, and as the show progresses both the Ivy cast and the Holly cast  have shown a great deal of sensitivity as well as familiarity with this iconic character.