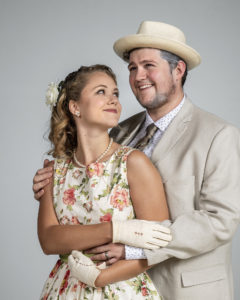 Promo photo for UCO production of “The Most Happy Fella.” Sonnet Lamb as “Rosabella” and Sean Steele as “Tony.”
Photo by Daniel Smith.

By Clayton J. Blair and Staff

“The Most Happy Fella” is considered Loesser’s most ambitious and romantic musical. It first appeared on Broadway in 1957 and ran for 676 performances. Since then, it has enjoyed several revivals, including one staged by the New York City Opera. For a show that came out in direct competition with “My Fair Lady”, it surely should be considered one of the great operettas.

“The Most Happy Fella” is a heart-warming story of Tony, an aging, shy Italian fruit grower, and Rosabella, the lonely young waitress whom he courts by letter, ultimately winning her heart.

“In musical theater circles, “The Most Happy Fella” is lauded as one of the quintessential musical theater works of its time,” says Greg White, Ph.D., director of Central’s Musical Theatre program, and Director of the show.

The University of Central Oklahoma’s Grad Student Sean Steele is Tony, and he is heartwarming, honest, humble, and has control over his voice as very few college graduate students do. The audience might become a bit frazzled at the idea of an older man pursuing such a young woman, but you lose track of that with Steele’s innocence. Sonnet Lamb portrays RosaBella (Amy) in such a natural vibrant way that you are able to forgive her for a simple mistake many of us have made. Together these two take us along for a journey that we readily accept.

Sierra Sikes plays Cleo, The best friend of Rosa Bella, and Sikes steals everything she is in, if not the entire show. Hilarity abounds everywhere she goes, and she is just a delight to watch perform. Dylan Herrin is Cleo’s love interest Herman. Herrin is quite amusing in the role, and delivers some laughs like a hand to the face. Greg Gore plays Joe, the friend of Tony involved in a betrayal. Gore plays this role in a state of happy ignorance, making the choices and the happenings around him seem as though they’re just not his fault.

Other notables are Caleb Barnett, Jordan Harris, and Sam Brinkley, portraying the trio of Guiseppe, Pasquale, and Ciccio. Though there are some minor technical difficulties during the entrance of this trio, throughout the show they become a highlight. All three present humor, understanding, and vocal ability not only necessary for the role, but a good amount of the show would drag on if not for their high energy, comical entertainment.

The set is plain, but makes up for it with absolutely brilliant lighting design by Matt Avra.
Amy Reynolds-Reed does an outstanding job with the choreography, though sometimes the ensemble dancers seem to have trouble buying into it.

Altogether, “The Most Happy Fella” makes many a happy audience member, and I look forward to seeing more from this UCO musical theatre program.

The University of Central Oklahoma School of Music’s Musical Theatre presents “The Most Happy Fella” at 7:30 p.m. Oct. 4-6 and 2 p.m. Oct. 7 at the historic Mitchell Hall Theatre, located on Central’s campus.

Though this show has already closed, we felt it was important to recognize the hard work and talents of all involved with the “The Most Happy Fella”. Occasionally a review is posted after the show has closed, due to the short run of the musical and/or the tightly wound schedule of a theatre reviewer! This review should serve as a “BRAVO!!” to all involved. It also serves as a reminder to keep UCO on your radar when planning future nights out in Oklahoma City. Great theatre is not that far from you right now. -OKASH Staff