UCO’s My Fair Lady is Timeless and Ever Fresh 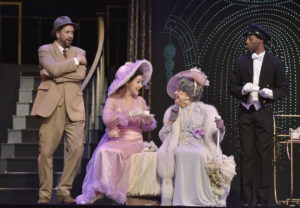 If there was ever an ideal model for what musical theatre should be, My Fair Lady would fit the criteria perfectly. One of the most highly-regarded musicals of all-time, the original Broadway run in 1956 starred Julie Andrews and Rex Harrison. Harrison later reprised his role as Henry Higgins, next to the iconic Audrey Hepburn, in the 1964 movie. My Fair Lady follows Eliza Doolittle, a young girl from 1913 London who enlists help from a dialect coach to become a seemingly presentable lady.

The University of Central Oklahoma’s Broadway Tonight and Summerstock Productions have teamed up to bring this classic to UCO’s stage. UCO alum and veteran actress Lindsie VanWinkle returns as Eliza. VanWinkle is an amazing vocalist, astoundingly talented and a beautiful Eliza. She’s the total package, with composure and poise to spare. VanWinkle is practically hidden under her elaborate flower girl hat in the opening number, but doesn’t let her star remain dimmed for long. She’s a gracious Eliza, leaving room enough for others to shine right alongside her. VanWinkle’s presence brings to mind actresses who played Eliza in the past, yet she makes the character her own. She presents a perfect leading lady. 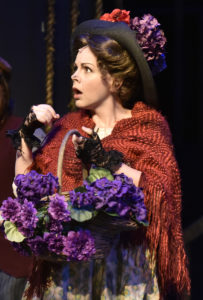 VanWinkle’s leading counterpart is Greg White as Higgins. Higgins is the uptight tutor who helps Eliza ditch her cockney accent. Eliza wishes to sound like a real lady so she can work in a proper flower shop, instead of peddling petals on the streets of London. Determined to prove his abilities as a linguist, he sets out to turn the street urchin-like girl into a charm he can carry on his arm. Higgins wagers his friend Colonel Pickering that in six months, he can create a verifiable Lady in Eliza. Together they plan to pass her off as a duchess and impress royalty and their rich peers in the process.

It would be easy to fall into the shadow cast by VanWinkle’s performance, but White holds his own. White is a confident Higgins who is doggedly sure of himself, despite his obvious character flaws. White’s character is accidentally loveable, completely oblivious to the aspects that make him so frustrating. White, too has an impressive vocal range and employs a quirky cadence to his dialogue. White’s musical numbers involve moments of melodic speaking, where he’s not exactly singing, but not outright talking. It’s different, noticeable, and adds a unique touch to his performance. Together, White and VanWinkle portray a love-hate relationship that keeps the audience engaged and laughing throughout the show. They’re a wonderful pair!

Higgins’ confidant Pickering is played by David Fletcher-Hall. Fletcher-Hall is sweet and jovial. He cares for Eliza and their exchanges are warm. Fletcher-Hall serves as the opposite to White’s brashness. He’s also one of the many comic reliefs in the show, and his timing is perfect.

The unconquerable Stephen Hilton plays Eliza’s father, Alfred P. Doolittle. Hilton is lively and spirited. He’s a crowd pleaser and scene stealer, a stand out in a cast of standouts. An unfortunate microphone mishap causes the audience to miss several of Hilton’s funniest moments in Act I. Like the true professional he is, Hilton carries on and projects his voice into the back of the house. Fortunately his microphone is back in working order by Act II, and the performance goes off without another hitch.

Charlotte Franklin is Mrs. Higgins, the no-nonsense mother of the professor. Franklin brings everyone back down to earth, especially her son, and the result is entertainment at its finest. Franklin is a delight and an ally to Eliza. Franklin expands on that relationship and becomes another audience favorite, saving the day in Act II. Likewise, Renee Krapff as Mrs. Pearce, head housekeeper to Higgins, becomes fast-friends with Eliza. Krapff is engaging and stern, a tough woman to be reckoned with.

Cody Dent plays Freddy, a lovesick stair warmer who waits for Eliza outside the door at the professor’s home. Dent’s puppy-dog devotion is endearing without being pitiful. Dent’s duet with VanWinkle is one to look forward to! Rachel Nicholes is seamless as Freddy’s mother Mrs. Eynsford-Hill, as well as an impressive ensemble dancer.

Several noteworthy scenes occur with the Male Quartet, comprised of ensemble members Sean Steele, Sam Briggs, Peter Fischaber, and Clayton J. Blair. The four bring lovely harmonies to the already outstanding show. They complement Eliza and each other wonderfully, and are a humorous and energetic group.

The large ensemble, powerhouse cast, and gorgeous musical and dance numbers could not come together without brilliant directing. It’s just too large a ship to steer. Luckily, UCO has the Tony, Emmy and Academy Award winning Tony Walton at the helm. Walton’s professional background and keen eye for detail has produced a beautiful, breathtaking musical.

Though based in 1913, and popularized in the 50s and 60s, My Fair Lady resonates with modern audiences. It’s a truly coming of age tale, and young people everywhere can relate to the endeavors and dreams of Eliza. The struggles of disadvantage, and the hope of rising above, are inspirational and universal experiences. Though it’s an old show, it feels fresh and relevant. There are elements of classism and obvious moments of sexism in the show, and they’re eye opening. This musical serves as a reminder of how far we’ve come as a society, as well as solidifying how far we have  to go.

We’d be remiss not to mention the fabulous talent that made up the large ensemble. They sing and dance their hearts out for three full hours, and they make the show the success that it is. Listed here in full are the wonderful ensemble members:

The understudies are Morgan Rothwell as Eliza, Dean McSpadden as Higgins and Pickering, Rachel Nicholes as Mrs. Higgins, Easton Edwards as Freddy, and Summer Hilburn as Mrs. Pearce. 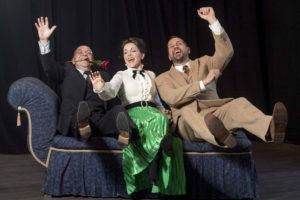