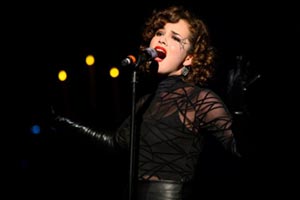 Mica Martinez in “The Man That Got Away” from Macabret: A Spooktacular Halloween Revue. Photo by UCO Photographic Services.

The UCO Musical Theatre students present a “Spooktactular Halloween Revue” at the UCO Jazz Lab. The annual concert, Macabret, features the full cast of UCO musical theatre students, presenting contemporary pop/rock songs with a Halloween inspired twist. The production is wholly produced, performed, directed and designed by the students, with a little help from department directors and choreographers. Talent, hard-work, energy, passion, and a macabre sense of fun are on display, and it’s a wild and wicked event for the Edmond community to enjoy each year.

The show opens, as tradition holds, with the full cast performing that Halloween staple Thriller. This year’s opening number is a mashup of Thriller and Heads Will Roll, a song combo popularized on the musical theatre TV show Glee. It’s a unique take on an old classic and it sets the evening for creative, Halloween inspired renditions of popular tunes.

Each song performance features its own costumes and themes, making them individual musical vignettes. Well-known characters are seen, from Beetlejuice to Harley Quinn, Queen Elsa to Freddy Krueger, and everywhere in between. It becomes a fun game to figure out how the characters will fit into the song, and some of the costume choices are puzzling at first, but it works out every time.

Logan Vohs is the spooky voice in Thriller, starting the evening off with a deep and menacing laugh. Sarah Royse dances beautifully during Dark Lady while Jackson Lease and Graeme Morrison sing her fate. Sam Brinkley as Beetlejuice begs for the love and affection of Skylar Hemenway as Lydia in Oh! Darling. Madison Eckerson gives a powerful performance in Jolene, setting the bar high early on in the show. Skylar Hemenway battles angels and demons, portrayed by Sophie Mings and Hayley Martini, in Fire. 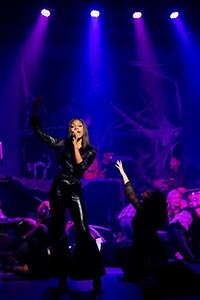 Erica Burkett in I Will Surive. Photo by UCO Photographic Services.

A similar plight is faced by Mandy Miller and McKenna Nolin-Haygarth in Highway to Hell. Erica Burkett gets the last laugh in I Will Survive, as does Carly Johnson in Crazy Train. The men of Heartache Tonight are charming and creep-tastic, including Cameron Blakely, Ben Hardin, Dylan Herrin, and Hagen Wano. Mica Martinez is dynamite, crooning about The Man That Got Away, and it’s clearly his loss. Mackenzie Ford as Queen Elsa is sly and sparkly in Cold as Ice, casting her spell on the audience. Cara Chesney rips her own heart out in Take Another Piece of My Heart, and Shafer Wilkerson shows his true colors in Born to Be Wild. The Freaks inspire originality and acceptance in This is Me, and the closing number, Another One Bites the Dust, ends the evening with the same level of energy with which they started.

The full show is two hours, with a variety of collaborations and roles, showcasing the talent and education of the musical theatre students. This Halloween-themed revue serves as a fundraising event for the theatre department’s audition season, but it’s also a chance for the students to show off what they’re learning and the skills that are being refined in University level theatre. There are so many in the company, they’ve been split into two casts, alternating casts and performing twice a night for the 3 night run. Both casts are listed here, as it’s important for their work to be acknowledged, whether each student specifically performs for the reviewers or not: 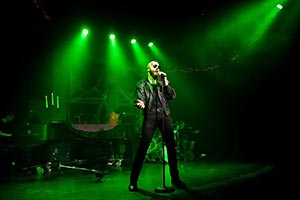 Macabret’s Born to Be Wild. Photo by UCO Photographic Services.

Macabret is indeed spooktacular, creative fun, and it’s a new tradition that should be revisited every year! The venue is close and comfortable, an ideal place to see live music. Bar service from Hideaway Pizza next door means you’ve got all you need in one spot, and it’s a perfect evening of live entertainment.

Macabret is concluded for this year, but it’ll return next year, and it’s not to be missed. UCO’s MT Dept. will also present a Christmas revue in the same vein as Macabret, and it’ll put you in the Holiday spirit just like this one does. Macabret is bloody, knife-twisting, back-stabbing, creepy, crawly Halloween fun! Congrats to the cast and crew.