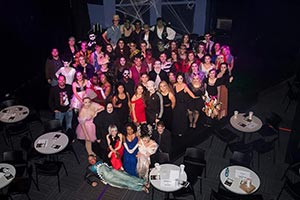 The cast of UCO’s 2017 production of Macabaret.

There’s something fun about mashing up words, especially for the season at hand. The ever popular Snowpocalypse comes around occasionally for an impeding snow storm and the apocalyptic response that ensues. Then of course, there’s the classic Fallsummoween. This is one we’re very familiar with in Oklahoma. It’s officially Fall, according to the calendar, but it still looks and feels like Summer outside. So naturally, we crank the A/C down, turn off the lights, and burn a pumpkin candle, just pretending like it’s Halloween. The UCO Musical Theatre students are capitalizing on this fun idea, presenting their annual musical revue, Macabaret. Yes, you read that right. And it promises to be, naturally, “spooktacular”.

Mashing up both macabre and Cabaret are the perfect ways to describe this fun Halloween experiment. This production is completely student run, a “jukebox musical” style concert in which the students choose a hefty lineup of popular songs and arrange them with a Halloween spin. Early on into rehearsals for Macabaret, two MT students, Hagen Wano and Caleb Barnett, sat down with me to fill me in on the exciting details. 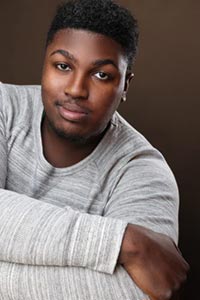 Barnett says “We’re still figuring out the full set list, but we know we’re opening with Thriller. We do that every year. We’re also going to do Born to Be Wild and It’s Raining Men. It’s coming together.” He elaborates, “I love Macab so much. It’s an annual event that the whole community in and around Edmond looks forward to every year, and so do we. It’s the show I look forward to the most.” Wano agrees, saying, “Macab features the entire UCO Musical Theatre student body. The students have input in all the concepts presented. We make our own costumes. Direction and tech is all done by the students. It’s the one time we have to all get to know each other. The rest of the year we’re spread out with different projects.” 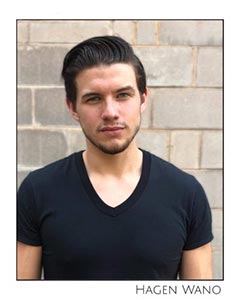 The show doesn’t have a storyline or dialogue, it’s just, as Wano puts it, “A bunch of people singing at you for two hours.” It’s a different lineup of songs every year, richly collaborative and a show that the students work hard to perfect. The final number will remain a tantalizing secret, although they tell me what it is, and trust me, it’s going to deliver.

Ticket sales for Macabaret also serve as fundraising for the UCO MT department. Funds raised during ticket sales for this event will be partially allocated towards travel expenses during the Theatre Dept’s audition season. This is the students’ way of giving back to the community that has given so much to them. Barnett agrees that it’s a way to reach back to the community, saying “I love seeing people react to this show. Seeing the audience respond and get excited when they recognize the next song, it makes the 4-5 weeks of working on it all worth it.” Wano adds, “When we’re working on it, it can be chaotic at first, but our Stage Managers (Libby McCormack, Hayley Martini, Skylar Hemenway) really help us out. And when we’re there performing it, the flow of it all connects. And it can still be crazy backstage, but on stage it works.” 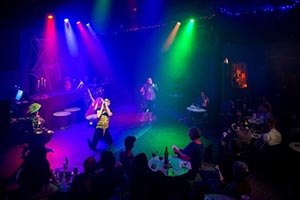 Macabaret: A Spooktacular Halloween Revue, presented by UCO’s Musical Theatre Students, has performances October 24th, 25th, and 26th at 6:30 and 9:00 p.m. each night at UCO’s Jazz Lab, located at 100 E. 5th Street in Edmond. Tickets are available at ucojazzlab.com or by calling the box office at 405-974-2100.