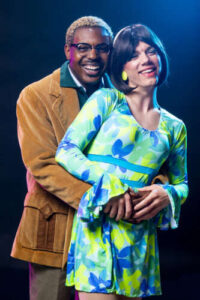 UCO’s College of Fine Arts and Design (CFAD) and the Musical Theatre Division present Jonathan Larson’s Rent, running until October 10th at Mitchell Hall Theatre. UCO’s Musical Theatre program is one of the best in the state. They produce big, bold works, and never shy away from tough subjects. Rent is polarizing, at times controversial, and it’s an institution of American musical theatre history. Love it or hate it, nearly everyone has an opinion on it. Playwright Jonathan Larson died suddenly before Rent was out of previews, essentially sealing an unfinished work. While the show is important and historical, it’s hardly perfect. The plot can be messy, and the characterization falls flat in multiple points. But the message is important, the characters and musical numbers are iconic, and the world wouldn’t be what it is today without this show.

UCO’s production makes any skeptic into a believer. The balance is found here – production director Scott Guthrie isn’t reinventing the show, nor is he burying it in tired clichés. It’s just nostalgic enough to feel familiar, and just fresh enough to not feel tired. The students in this program always carry heavy, historical material with respect and honor. This is in no small part thanks to Department Director Greg White. White instills this work ethic and appreciation for important works into the hearts of his students. What results is beautiful theatre, and professional-level quality of performance.

Rent is double-cast in some principal roles. The Roger Cast is reviewed, but the Angel Cast is undoubtedly just as brilliant.

Jimenez and Morris-Sherman have explosive chemistry as Joanne and Maureen, a vital component for these two characters. They’re both powerhouses, but they complement each other well. Jimenez is a force of nature, intimidating and bold. Morris-Sherman is loveable and enigmatic, and of course sexy to a fault. Sophia Mullican is simply stunning as Mimi. Mullican rocks her musical numbers, and creates a character who’s complex and heartfelt.

Caleb Barnett is a favorite performer of OKC audiences. There’s no other way to say it – he’s absolutely incredible. His portrayal of Collins is beautiful, moving, heart-breaking, funny, and wholly his own. Nothing less should be expected from this superstar. Wilkerson is hard-working and genuine as Roger. Roger can be a hard-sell, but he’s in capable hands here. Wilkerson finds the depth required to make Roger redeemable.

Logan Wright is solid and reliable as Mark, the anchor and narrator. D’Shaud Howard is sympathetic as Benjamin Coffin III, well-intentioned and honest. Angel is the best thing about Rent, and they are portrayed wonderfully by Samuel Moran. This character serves as the catalyst for every plot twist and point that Rent is trying to make. Moran carries that weight, taking the role seriously yet allowing levity to shine through. Moran is, in a word, perfect.

The ensemble cast members have their own moments to shine, and they are consistently strong throughout the performance. Kynzi Gumm is Mrs. Cohen, Lamar Burns is Mr. Jefferson, MK Mackey is Mrs. Jefferson, Garrett Christensen is Steve, and Josh Thompson is Gordon. Roberto Lopez is Paul, Tyler Treat is Alexi Darling, and Jessica Cajina serves as the Female Swing.

The live band is polished and sharp, and they make legitimate rock music out of musical theatre. Marianne Searle serves as Music Director, with Jay Gleason and Nathan Medlam on guitar, Clinton Trench on Bass, and Michael Mosteller on drums. This group performs together all around OKC, having recently been seen in UCO’s production of Rock of Ages at the Jazz Lab. They make a great team of professional musicians, and they’re worth the price of the tickets on their own.

Rent is a staple of the American theatre songbook. It’s a rite of passage for any performer or patron, and while it’s not the end-all, be-all of musical theatre, it has certainly earned its place in history. This production is as good as Rent gets, and anyone who loves the show needs to see it. UCO’s student performers always take their charges seriously, and this time is no different. They handle the subject-matter of this heavy show with professionalism and sincerity. They’re impressive as always, and truly living in the moment.

Rent serves as a reminder that life is too short to let things get in the way of our relationships, because all we really have in life is each other. It’s something we all could use a reminder of, especially in the politically divided, socially-distanced world we live in. Love it or hate it, the message is one of love and acceptance, and that’s worth the price of last year’s rent, and this year’s too.