UCO Gears Up for Grease at Mitchell Hall Theatre 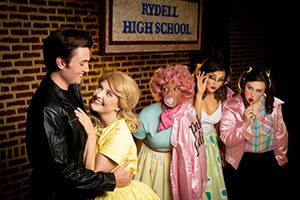 From left, Dylan Herrin as Danny, Morgan Rothwell as Sandy, Kalyn Glover as Frenchy, Sarah Royse as Marty and Hailey Hatfield as Jan in University of Central Oklahoma and Broadway Tonight’s production of Grease.

Grease is the word! UCO’s Fall 2019 season is starting up with the quintessential American musical. Their production of Grease: The Musical takes us back to high school with the greasers, the pink ladies, and all the antics of Rydell High! It’s a wild ride and tons of fun. And of course, the music and poodle skirts! They’re classic Americana and classic Grease.

Early on in rehearsals, we spoke with two of the Grease cast members about their preparation and rehearsal process. Seth Paden and Sam Brinkley answered our burning questions about their upcoming roles in the show. See below for our Q&A:

Sam Brinkley: Grease is awesome! We are one week into rehearsals and it’s already looking super strong. I think the hardest thing about preparing for Grease is that it’s so well known. Everyone already has a preconceived idea of every character so there isn’t much room for personal originality without it being a bust. Everyone comes to see Rizzo, played like Rizzo, so if you put too much of your own spin on it, you risk a lot. Also, everyone and their mother knows these songs and these famous lines. You have to be perfect and well prepared because if you aren’t quoting everything word for word, you aren’t fooling anyone.

OKASH: Grease is infamous and not without controversy. Do you think it is a story of empowerment, and if so, whose? 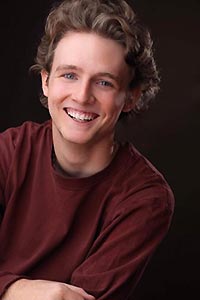 Brinkley: You know, I think the controversy really comes in how the movie was portrayed. It’s all about how you play it. I think the way that our director, Steven Smeltzer, is playing it is very empowering to Sandy. Rather than what it seems to be in the movie, with Sandy abandoning all of her morals and personality to impress a guy, Steven directs our Sandy, Morgan Rothwell, to make sure to play it as she is making the choice herself to let loose and try different things to discover who she is as a person, rather than restricting herself to the confines of 1950’s moral code. As a cast, we are very adamant about this. It’s very important to make sure that the leading Woman doesn’t give up her self-worth for a man, especially in today’s social climate. The show is all about figuring out who you are and not being afraid to be that way. And that’s the way we intend to perform it.

OKASH: Let’s talk about the “boys dance too” movement. What has dancing and acting done for you? Do you think that there is still a stigma involved with being a male in the arts? If so, let’s break that, shall we!?

Brinkley: The boys dance too movement means a TON to me. Although I am not an incredible dancer myself, it is SO important for so many of my very close friends. Unfortunately, even though our country has come a long way, we still have a ways to go to erase this stigma of it being not okay for men to express themselves in the arts. When you think about it, it’s pretty dumb. Most of those people are admiring celebrities to do art in front of millions of people every day.  I mean, you see men like Bruno Mars or Justin Timberlake singing and dancing the hell off of every concert stage and everyone going crazy! What’s the difference between that and my friends and me going to ballet class?

OKASH: Tell us about playing Sonny! What are you most excited for about this role? 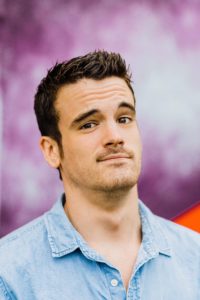 Seth Paden: I’m most excited about who he is to The Greasers. He’s an asshole, but hilarious and somewhat endearing. He’s a hot mess. And I find that my hot-mess nature is able to dig into being a hot mess on stage, and I love it! Sonny is always there to say the wrong thing or get an eye roll from The Greasers, and I relate to that for my real life! Of course I try not to be as much of an ass as Sonny, but it’s fun to channel the hot mess-part of me into roles like Sonny.

OKASH: Grease is known as The American Musical. What do you think makes it so iconic?

Paden: I think this musical is iconic because it is a coming-of-age story from the 1950s, which was a time when America was “perfect”. It wasn’t really perfect but so many people look at the fifties as a “Leave it to Beaver” type situation. Also, it’s one of the first coming-of-age stories about high schoolers in musical theatre. I’m sure there’s been one before it, but it is about “The American Teenager” in the most “American Era”.

OKASH: Recently in the news, there’s been an outcry of “boys dance too” and overall support for male dancers and performers. What has being involved in the arts meant to you?

Paden: I’ll just say straight up, dancing is one of the hardest things I’ve ever done. The strength it takes, the DISCIPLINE it takes, is ridiculous. And anyone who speaks poorly of it is simply uneducated and scared of anything different than what’s “expected” of a man. This show in particular is so HARD! With every one of Steven Smeltzer’s shows that I’ve seen, the choreography is always bananas. Now, being in one of his shows, I’ve had to practice extra as much as I can to keep up. It’s hard and rewarding and I’m getting stronger because of it.

Not everyone has to spend as much time dancing. I’m new to dancing in this way. So many of these students are incredible dancers, but with Smeltzer’s intricate choreography, it’s so much to learn and retain! In the end it’s going to look amazing! If I counted right, in total there are 15 numbers with choreo in it! So, A TON of dancing! Dancers are some of the strongest, with mental discipline and pure strength. People who say otherwise are simply wrong. 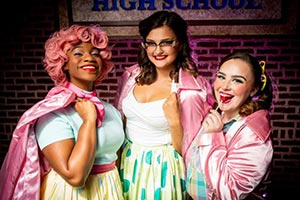 From left, Kalyn Glover as Frenchy; Sarah Royse as Marty and Hailey Hatfield as Jan in UCO and Broadway Tonight’s production of Grease.