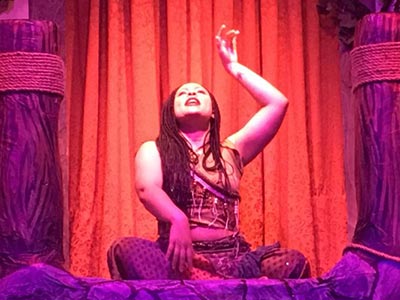 Tyler Woods has long been known as an actor of superior qualities and a director of sublime intelligence, yet he has outdone himself with Shakespeare in the Park’s production of “The Tempest” at the Paseo location.  As a result, the entire cast of superlative actors has risen to greater heights creating one of the best Shakespearean productions to grace an Oklahoma City Stage.

As the play opens a violent storm casts sailors and noble travelers into the sea and many survivors make it to a mysterious island nearby.  They are separated, one from the others and search the island for assistance and other survivors.  The island is populated by Prospero, the deposed Duke of Milan, his young daughter Miranda, servants Caliban and the beautiful nymph, Ariel.  The survivors of the storm include Prospero’s brother Antonio usurper of Prospero’s duchy in Milan. Also cast ashore are Alonso, King of Naples, his brother Sebastian, trusted counsellor Gonzalo, and Alonso’s son, Ferdinand. Young Ferdinand cannot be found and is presumed dead although he’s survived and wanders the island alone.  Twelve years earlier Alonso assisted Antonio in overthrowing Prospero and he seeks revenge and reinstatement.  At Prospero’s behest Ariel causes the great storm that wrecks the ship and puts Prospero’s enemies within reach.  And as Prospero seeks revenge he also worries for his daughter Miranda, raised in solitude and innocence.  Miranda and Prospero find Ferdinand and, encouraged by Prospero, Miranda and Ferdinand fall in love.  Elsewhere on the island Antonio,  the grieving Alonso, Sebastian and the loyal advisor, Gonzalo search for Ferdinand, yet continue to plot against each other as they once plotted to destroy Prospero.  Prospero’s servant, the magical beast Caliban has discovered Stephano, the king’s inebriated Butler and Trinculo, the king’s jester and the three of them plot a coup against Prospero as well. 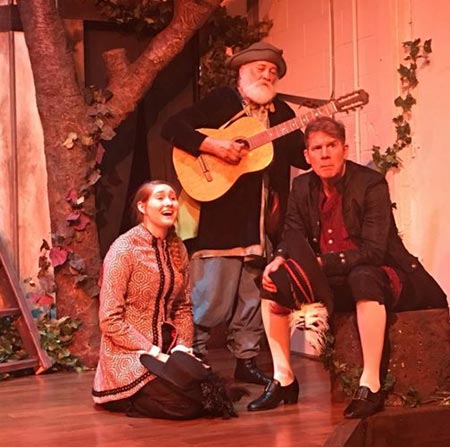 Kayla Booth as Adrian and Robert Shaun Kilburn as Alonso singing with Stephen Hilton as Gonzalo, and Music Director on guitar. Photo Courtesy of Kathryn McGill

“The Tempest” has a rather complicated and convoluted set of subplots and plots and is considered difficult to stage with comprehension.  Yet, in the small intimate space at the Paseo location for Oklahoma Shakespeare in the Park, Tyler Woods successfully presents a clearly understood production.  Scenic design by Ryan Fischer is delightful and simply constructed to create numerous locations.  The beautiful costumes by Emily Herrera lend elegance and grace to the characters.  Not only are one’s eyes captured in the production, but the ears are also enthralled by Music Director and Composer, Stephen Hilton.  But, of course, it is the cast that makes the experience and the cast is quite incredible.  Woods has the ability to accurately judge the actor most suited to each role, predicting success.

First and foremost, the challenging role of Prospero is in the hands of the very talented W. Jerome Stevenson.  Stevenson who is Artistic Director for the Pollard Theatre in Guthrie has on those occasions when he is on stage him been considered one of Oklahoma City’s finest actors.  His interpretation of the sorcerer/deposed Duke is mesmerizing. Stevenson draws the audience into the show with ease and delight from the beginning creating the ideal Prospero character with all his intricacies and individualism revealed in sumptuous entertainment. 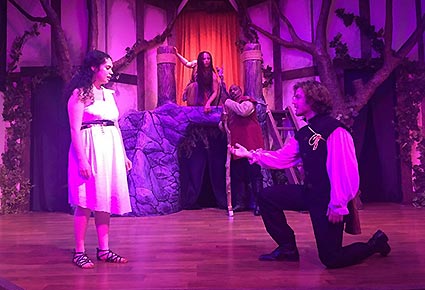 Miranda Summar as Miranda receives the proposal of Nick Hone as Ferdinand in OSP’s “The Tempest” Photo Courtesy of Kathryn McGill.

His lovely daughter, Miranda, is coincidentally played by Miranda Summar and her performance is quite lovely.  She is believable as Prospero’s daughter and Summar gives her a bright and independent attitude that is charming in her extreme and spirited innocence.  Ferdinand is played by Nick Hone, a fine actor with flair.  The two lovers make a rather adorable couple with nice chemistry lurking behind their loving embrace.

The native inhabitants of the isle are the monstrous but slightly endearing Caliban and the loveable yet mischievous spirit Ariel.  These two magical creatures have been enslaved by Prospero who routinely promises freedom.  They do his bidding, but in Caliban’s case it is reluctant and he yearns to overthrow Prospero and be free of the mastery.  Ariel is portrayed by Mariah Warren with a powerful grace and gypsy voodoo flavor that is enchanting to watch and hear.  Ariel’s somewhat seductive dance with the silks under the guidance of choreographer Rebekah Garrett is sensually a treat. Her island accent completes the seduction. Caliban is played by Tom Orr with an exciting and demanding brilliance that is both endearing and endangering.  These two talents could not have been cast any better; their magic alongside the sorcery of master Prospero is enthralling. 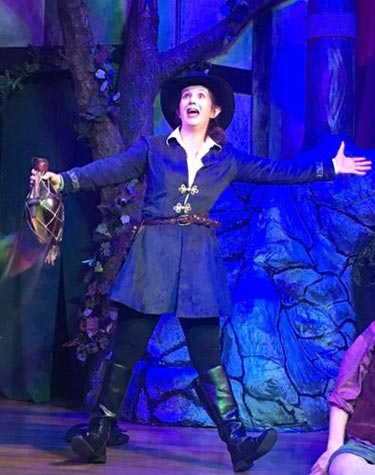 Antonio, Prospero’s brother but lacking fraternal feelings is aptly played by Jonathan Lynch.  He joins his fellow conspirators on the island expecting to find an escape and he does so with some authority and guilt. As King of Naples, Alonso is a take charge character played by Robert Shaun Kilburn who seems to consider the search for his son Ferdinand to be of greatest importance.  Sebastian, brother to Alonso, also a member of the conspiracy and search party is Kris Kuss bringing Sebastian into the fold with equal skill. In this group of castaways one also finds the counsellor Gonzalo.  He has never been part of the conspiracy and remains loyal to Prospero without knowing what happened to him. His distinctiveness is delineated with sensitive skill by the very talented Stephen Hilton who doubles as Music Director for “The Tempest” as well as designing the sound.  His consummate skill as a Shakespearean actor is paramount and his relationship with Alonso, Sebastian and Antonio reveals an interesting underlying command of the situation.  His inspired duet with Kayla Booth as Boatswain/Adrian is quite tender and an excellent moment for Booth.

Caliban has teamed up with the mischievous Trinculo jester to the King and Stephano, the King’s butler.  These two servants to Alonso relish their lack of supervision and spend most of their time passing around the bottle of wine Stephano rescued from the wrecked ship.  They are on the loose, on the lam and on the brink of disaster.  As they befriended Caliban, now all three members of this team can’t help but look for trouble.  Lia Katherine Ryan plays Stephano with amusing wit and witless abandon, lurching about in a drunken haze.  Kevin Cook is wonderful as the somewhat bumbling humorist jester.  Their characters bring out the best (and worst) in the monster if the island working hilariously with Orr’s Caliban. 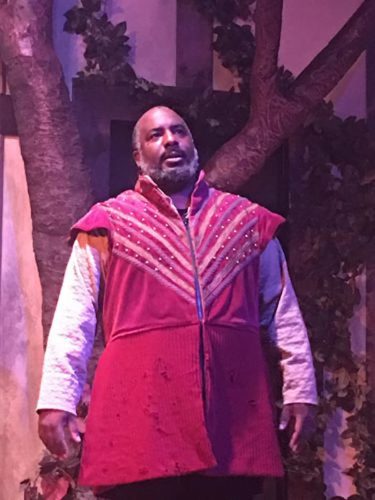 Woods has the advantage of a confidently talented cast and a supportive crew. With Ryan Fischer’s lovely and intelligent set and Emily Herrera’s costumes setting the tone and Hailey Stephan’s work as Dramaturg alongside the other excellent crew members the production is ideally executed. “The Tempest” sets a standard of achievement for Shakespearean performance.  And when the leading actor has exceptional talent along with absolute command of the stage and the play as Stevenson’s Prospero does, success is guaranteed.  “The Tempest” is, in short, masterful under Woods direction.

“The Tempest” plays through October 26 at the Paseo location for Oklahoma Shakespeare in the Park.  While curtain is at 8:00 pm evenings and 2:00 pm Sunday matinees, it is an excellent idea to arrive early ensuring a good parking space near the theatre.  Then a pleasant stroll through the delightful Paseo district visiting beautiful art galleries or sampling delicious cuisine is possible.  The theatre is located in the offices for Oklahoma Shakespeare in the Park at 2920 Paseo.  For tickets and information visit www.okshakes.org or call the box office at 405-235-3700.