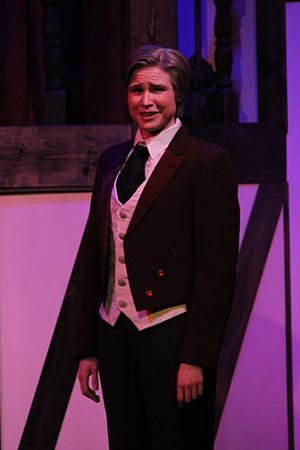 “Twelfth Night” begins the 35th year of outstanding classical theatre from Shakespeare in the Park at its indoor location: 2920 Paseo in the Paseo district.  McGill directs with concentrated attention to detail, allowing the actors and the audience to have a great deal of fun in the process.  The play is about a set of fraternal twins, Viola and Sebastian, who are shipwrecked.  Viola is rescued, and finding no other survivors washed up upon the shores of Illyria, she mourns the loss of her dear brother.  She determines that she must make her way in the world as a man name Cesario, and dresses accordingly.  She finds employment with the Duke of Illyria, Orsino.  Orsino is quite impressed with his new page.  He sends Cesario to woo the Countess Olivia in his behalf.  Cesario is quite successful, speaking from the heart, as he cannot reveal that he is she and loves Orsino.  The sweet Countess Olivia falls for Cesario.  Olivia has rejected Orsino as she has vowed to spurn all suitors for seven years while she grieves for her brother.  Her vow is forgotten as she is overcome by the gentle Cesario.

Meanwhile, back on the beach, the pirate, Antonia, has rescued Sebastian, who grieves for his sister.  Will the two lost twins find each other?  Will they be able to reveal their identities and find love?  Will the complications in Olivia’s household cause so much disruption that happy endings are impossible?  The hilarious shenanigans that take place among the Countess Olivia’s staff and ne’er do well relations are the cause of much hilarity as Olivia’s uncle Sir Toby Belch and his friend Sir Andrew Aguecheek plot and prank everyone they can.  They are assisted by the noble serving woman, Maria, and the fool Feste.  Olivia’s steward, Malvolio, is disliked by everyone for his narcissism and deplorable self-serving attitude.  Their plot to destroy him causes much confusion. 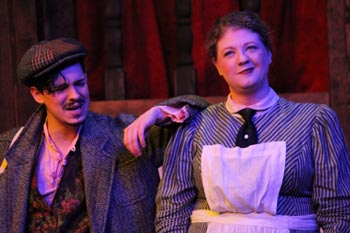 The language of Shakespeare is beautiful, but often difficult to follow for the modern audience.  McGill’s direction is inspired, and her cast is able to retain the beauty and humor of the language as they present the convoluted plot with clarity and sensibility.  The entire cast is perfectly in tune with their roles, making this production of “Twelfth Night” a joy to behold, understanding the subtleties and perceiving the humor.

Jessa Schinske is Viola.  She is phenomenal in her interpretation of Viola masquerading as a man and using her brother as her base for manliness.  As a result, Viola’s Cesario is tenderly masculine, youthful yet wise.  She’s believable as a young man, yet she never loses that feminine touch that creates such humor and pathos in her situation.  Her outstanding performance is crucial to the play and she performs flawlessly.

Jordan Nicholes as Duke Orsino reveals his tender feelings for his page masterfully.  It is easy to see that he is a little perplexed by the depth of his fondness for the young man.  He confides his feelings for Olivia to Cesario, using that as a barrier perhaps.  The expression of relief and delight that crosses his face when he discovers that Cesario is, in fact, the lovely Viola, is delightfully comical. 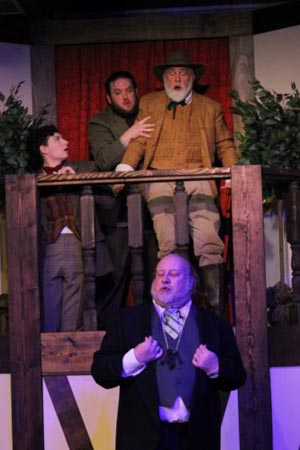 Sarah Lomize is the delicious, tender hearted and slightly arrogant Olivia.  Her declaration to forswear all suitors for seven years and continue mourning for her brother makes sense because no man living can compare to her brother.  Until Cesario.  She immediately reconsiders her commitment, because she has found a man who is equal to her love.  A man that understands her grief, but is too honorable to accept her love, for he has sworn allegiance to the Duke.  At the moment she realizes he is a twin, the look of sensuality that briefly lights up her face is wonderful, but she is not disappointed in discovering Cesario is Viola and that she will find happiness with the Duke.  She has fallen for Cesario, but she has married Sebastian.  They are the same, except for their sex and she transfers her affections without a qualm.

Kris Kuss is Sebastian and his character and manners mirror Viola’s perfectly.  But he is definitely a man, with the fighting talents and attitudes of good, strong men.  The two characters are delightfully alike, yet the audience can see the difference those blinded by love cannot see.

Onnika Hanson plays a variety of roles, Valentine, Fabian and Antonia.  The role of Antonia was intended as Antonio, the pirate captain who has been harassing Duke Orsino’s ships.  Playing the pirate as a lady, Hanson fulfills the secret fantasy of every woman, to be the beautiful, sexy pirate that can devastate an entire fleet with one swish of her sword, through her skirts.  It is wonderful to watch!  She then portrays the men with a masculine bravado that is impressive.

There are no genuine villains in this play. Malvolio, played by Hal Kohlman, comes the closest.  He is a micro-managing task master who expects absolute obedience and upright moral behavior.  Yet he succumbs to the trick Olivia’s household plays upon him.  He is led to believe that he can earn the regard of Olivia by wearing yellow stockings with crisscross garters. So, allowing his fantasies about Olivia to make a fool of himself, he winds up a ridiculous looking mad man, even as he is imprisoned for his daring.  Kohlman is brilliant in this role.  He is despicable, and yet, one feels for his comeuppance as deserved as it may be.

Villainy does come in the guise of mischief.  The mischief makers who conspire to humiliate Malvolio and cause other difficulties are members of the Countess Olivia’s household.  They are her uncle, Sir Toby Belch, played by Stephen Hilton and his good friend and drinking companion Sir Andrew Aguecheek played by Nicholas Sumpter.  These two gentlemen are old enough to know better, but they can’t resist behaving like errant school boys.  The also spend a great deal of times a bit tiddly, or, in their cups and they are hilarious together.  Hilton’s performance is amazingly funny; he has some incredible expressions at his disposal.  Especially when he is about to set someone up for a fall! Sumpter plays the bumbling drunken idiot to perfection, following the lead of Hilton’s Belch with blind faith and giddiness.  The two of them are definitely of the ‘hail, good fellow, well met!’ variety of gadabouts.

Joining them in their evil plots are Feste, Olivia’s fool, played by Kaleb Michael Bruza and Maria, Olivia’s noble ladies maid, played by Lindsey Rollins.  Bruza’s musicality and demeanor are exactly as the medieval fool is intended.  The fool finds the humor and can tell the truth without offense; in his guise as a fool, he is often the wisest.  Bruza has an unerring sense of the ridiculous and his talent is amazing.  Maria, the demure companion for Olivia is discovered to not be as ladylike as she should.  She is entranced rather than repelled by the frivolous antics of Belch and Aguecheek, and in good spirit, she is the author of the most diabolical of the evil schemes.  Yet she sings with such innocence and purity as she giggles with sheer delight tormenting poor Malvolio.

This production is one of the best Shakespearean plays to be mounted.  The superb cast is assisted greatly by McGill’s superlative direction, but also by the contributions of Caprice Woolsey, Dramaturg.  It is the function of the dramaturg to make sense out of the historical context allowing the actors to create realistic and believable characters.  With that foundation, this cast has the wherewithal to develop characterizations that are not only convincing but they are whimsical and clever, side-splitting and knee-slapping.  One can really appreciate and understand Shakespeare’s humor almost as if seeing “Twelfth Night” as an audience member of the Globe Theatre.

Production Manager Tyler Woods reveals his concept of “Twelfth Night” through the lovely yet simple set designed by Robert Rickner.  The costumes by Emily Herrera are delightful.  Technically the show is an example of everything going right for a production.  No detail is overlooked by the crew to make the show a success. 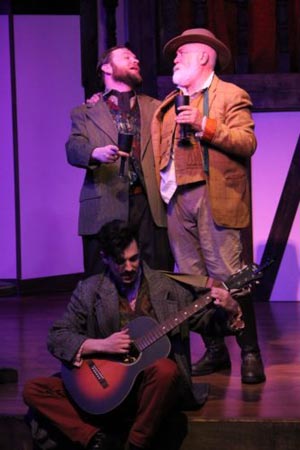 One of the most impressive aspects of “Twelfth Night” is the music used.  Stephen Hilton and Kaleb Michael Bruza collaborate to create an entire musical score that is appropriately Shakespearean as well as wonderful to the modern ear.  Each performer is given the opportunity to delight in musical talents hitherto unforeseen in most Shakespearean productions and they all excel as balladeers.  Hilton and Bruza’s collaboration should continue in the future, and one should consider the ballad book created for this show that is for sale at the box office.

“Twelfth Night” shows in the Paseo District at 2929 Paseo in Oklahoma City.  Running from February 7, 2019 through March 2, 2019, this show should be seen by all fans of Shakespeare.  Teachers should note that all students of Shakespeare would be well-advised to witness a perfect example of Shakespearean Comedy.  For tickets and information visit www.oklahomashakespeare.com or call 405-235-3700.  Curtain is 8:00 so don’t be late!  Come early and find parking near the theatre and a fine restaurant!