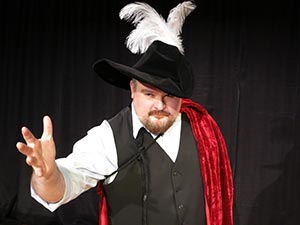 If one thing is certain about popular culture today, it’s that festivals are IN. From the famed Coachella in California, to Austin’s South by Southwest, Chicago’s Lollapalooza, and even the infamous Event That Never Was, Fyre Festival- festivals offer a one-stop for music and concert fans around the country. They certainly draw crowds. Lollapalooza rakes in an additional 500,000 people in Chicago in one weekend in August. Coachella expects 100,000 people a day during its 6-day run. And why not, it’s the best way to expose mass quantities of people to all kinds of music and lots of new artists.

This is the idea that Theatre Crude Fringe Festival co-founders and curators Jenny and Adam Brand had in mind when they decided to bring a Festival to Oklahoma City. As Jenny explains over coffee and note-taking at Midtown’s Elemental Coffee, “Fringe is an international term. It’s a festival-style theatre event, with one hour shows broken up by half hour breaks. Patrons can watch a full show for an hour, take a break, and come back to that same stage and see something completely different for another hour.” She also explains that Theatre Crude offers a variety that’s similar to what’s present in larger, more traditional festivals. “We wanted to vary the pieces in theme, content, and style. Sometimes that means seeing weird, crude drama. And sometimes it’s light, fluffy comedy.” 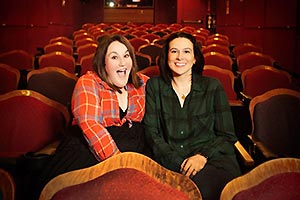 Lauren Brickman and Caitlin Bitzegaio in We Stan Together. Photo by Arin Sangurai.

The fringe festival takes place from September 25th-October 6th at the Capitol View Event Center, located at 5201 N. Lincoln Blvd in OKC. The festival features over 40 performances by 10 theatre companies, all with the goal to “expose patrons to as wide an array of styles and genres as possible.” The focus is on collaboration and creative process, with no budgets to worry about and a low-tech presentation style. The situation is a win-win. Burgeoning artists get to present their new works, while patrons can see as much theatre as they want without a hefty investment- time or moneywise.

Jenny elaborates on their idea, saying “We came into this with over ten years’ experience with fringe festivals. We’ve seen cities struggling with theatre patronage turn into thriving arts communities thanks to fringe.” We agree that Oklahoma City has a richly collaborative theatre community, and Jenny adds, “We’re asked, why Oklahoma. Our response is, why not Oklahoma?”

The line-up includes such tantalizing titles as ¾ Empty, Being for the Other, Cyrano A Go-Go, The Gravel Road Show’s Oklahoma USA!, Presence, Sweater Curse: A Yarn About Love, We Stan Together, Water Won’t Wait, and The Ultra Conservative Theatre Summit. Completing the line-up is a show by nationally touring stand-up comedian Jamie Campbell, titled Jamie Campbell: Professional Idiot. Part Improv, the stand-up routine features a segment in which Campbell takes topic suggestions from the audience. 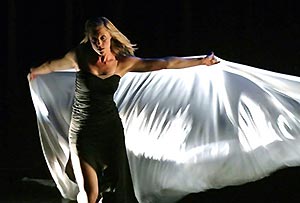 The Theatre Crude Fringe festival promises to bridge many gaps; between festival and theatre, between art and budget, and between artist and patron. Jenny adds with what may or may not be a wink, but is definitely at least a promising twinkle, “It’s going to be an experience.”

So far during this conversation, Adam has been mostly content to sit back and listen to Jenny and me gush about our favorite topic. This has been a great meet-up that has proven to be an example of the fringe festival itself. How quickly our interests, collaborations and connections mesh while we’re discussing a theatre festival in Oklahoma City. When I ask Adam directly, “Do you feel like you’ve talked it to death yet?” he concurs, saying, “Almost. I just want people to start seeing some of it at this point.”