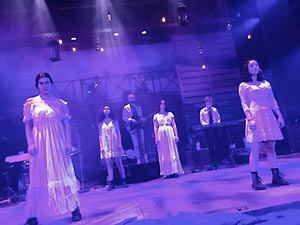 The Thelma Gaylord Academy’s Rokademy Experiment is no child’s play. The students that make up this band are polished performers who sparkle with the gleam of seasoned rock-stars. They take their audience on a ride they won’t soon forget. After attending an impromptu Christmas concert of theirs in December, the springtime show has remained one of the upcoming experiences I’ve looked forward to most. Unsurprisingly, they do not disappoint. This year’s concert is a 3 performance run of the concept album The Hazards of Love by The Decemberists.

The album is weighty in lyrics and technique. It’s got a thorough storyline, swaying and swooping harmonies that rise and fall with the tide, and a couple of the most brutal villains ever found in rock theatre. Led by OKC-based musical theatre icon Matthew Alvin Brown, The Rokademy Experiment is just plain awesome.

The performance begins in a rush of guitar and drums, followed by the leading ladies breezing onto the stage. They’re dressed in flowing white, a look that alternates between sweetly demure and more than a little creepy. For this performance, Camille Matlock plays The Queen and Isabella Acuña is Margaret. Gianna Hoffman is Margaret while Ariana Safi is the Queen for the other two performances. They’ve all got talent coming through their fingertips, and their vocals are haunting. They hold onto an otherworldly energy for the entire hour long concert. They float on the stage, white dresses twirling, while they dip, dance, and enchant the audience. The spell is not even close to being broken as they switch into rock-star mode. Make no mistake. These ladies can rock.

Porter Jones makes an impressive villain as The Rake. When he’s not stalking up and down the stage and lamenting what life could’ve been, he’s rocking out on keys. Jackson Murray is Margaret’s love William and if that’s not enough, he also plays bass, mandolin, and guitar. Ethan Wilcox and Brandon Ross play guitar, Jet Hoffman plays drums and melodica, and Rachel Blitz is dynamite on the keys. Zoe Gfeller and Jake Padgham play cello and autoharp. Padgham also plays bass, and Matthew Alvin Brown plays guitar and keys. 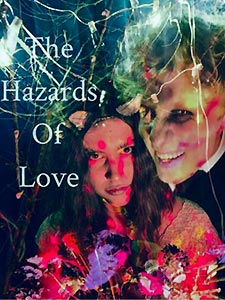 The Hazards of Love.

What a night! The Rokademy Experiment is a talented group, and their concerts are unforgettable. You won’t hear better live rock music, period. Their talent is vibrant and noticeable. But what sticks with you when you leave the theatre, besides the rich lyrics of the album, is the band’s work ethic. They’re clearly having fun up on that stage, but they’re also learning and growing as performers. They’re working hard to present a unique and professional concert experience to their audience. The fruits of their labor is one of the best things in Oklahoma musical theatre. This is a tough album. It’s challenging and complex. And they’re presenting it on stage, all without batting a glittered eyelash.

It’s wonderful to watch young performers showing the world how it’s done. It’s a team effort and a labor of love for all involved, especially director Brown, who’s been committed to this project for ten years. This tenth anniversary performance of The Rokademy Experiment is a gift. If you’ve seen them perform, you’ve likely returned. If you haven’t seen them, you’re really missing out. The promise and potential of these artists is never more obvious than during this final show of the academy year. Congrats to The Rokademy. It’s certain the hazards of love will not trouble them, not in the slightest.

The Rokademy Experiment’s concert performances are concluded for this season, but the Lyric Academy’s spring shows will continue. Check back here for more info in the coming weeks, or visit lyrictheatreokc.com for tickets.