The Rokademy Experiment Braves The Hazards of Love 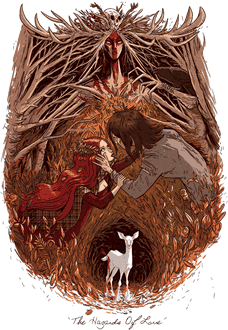 The Thelma Gaylord Academy’s Rokademy Experiment is gearing up for another epic concert performance. This time around, they’re performing The Hazards of Love by The Decemberists. Part rock theatre, part storytelling, the concept album is more than just fun rock music. The album features a plot and characters and creates a lavish musical fairy tale with each of the seventeen songs. The Rokademy has already impressed peers and parents alike with their rockin’ Christmas show, and this year’s annual spring concert is sure to bring the fire once again. This intricate lyrical journey is a chance for the students of The Rokademy to show off their musical chops. Their dedicated director Matthew Alvin Brown filled me in about the project and answered some of my burning questions below:

AP: Tell us about The Rokademy Experiment! How long have you been involved with it? What’s exciting about this year’s concert performances?

Brown: The Rokademy Experiment is an ever-evolving rock theatre project I’ve facilitated since 2009. Each school year, students aged 12-18 select a concept album to learn and perform in a theatrical setting. Every Experiment is different in style, tone and approach, but we always focus on blurring the lines between concert and theatre. Total creative freedom is the law of the land. Anything goes. And often does. It’s rock-n-roll in its purest form: wild, a little dangerous, sometimes confusing, and always incredibly impressive.

Most of the albums we’ve performed in the past have ranged from classic to obscure: OK Computer by Radiohead, Spilt Milk by Jellyfish, Revolver and Abbey Road by The Beatles, and The Wall by Pink Floyd. This year, we’re doing The Hazards of Love by The Decemberists. This is not a super well-known album, but it’s one of the best concept albums ever made. I’m particularly excited about this Experiment because, like Spilt Milk, not a lot of people are familiar with this record, so I think it’s a really great way to introduce people to the music. Experiencing young artists perform an intricate and dense record like this, with all the swagger they exude, is a really unique way to share the love of these great works.

AP: The Hazards of Love has been called a “rock opera” in the sense that it’s musical story-telling, with a plot and characters. It’s more than just an album. It’s almost like theatre in a way. What has been fun about working with both of those ideas to create a singular experience?

Brown: The Hazards of Love is such a visual album. The lyrics are incredibly high-brow (delightfully pretentious) and super detailed. It takes a LOT of listens to get all of the story. We’re going to project the lyrics in supertitles like an opera, just to give the audience a little help. I also think that’s a stylistic choice that sort of elevates the evening. Classes it up a bit. In the past, our Experiments have been psychedelic happenings with reckless abandon. But this record is measured and controlled and sophisticated. I’m excited to show everyone that buttoned-up side of The Rokademy Experiment. That said, with the exception of The Wall, this album will be the most theatrical in its presentation. We have lots of cool props being made, puppets and all sorts of great stuff. And we’re performing on the Bright Star set, which is really, really great!

AP: What do you think the Rokademy students are most looking forward to about the concert?

Brown: I don’t think the whole band was super on board with this album from the very beginning. By the time we started working on the songs, they were all totally on board. I think it speaks to the power of playing music. Only when they started playing it, did they start to “get it” on a new level. To see the whole band come together so quickly, not only to learn the record, but LOVE it, and play it with integrity and precision… that’s the coolest thing to me. And that enthusiasm and respect will come through in their performance. This album is very intricate and grown up. It doesn’t faze them a bit. They got that swagger. And I think it’s really going to be a pretty heavy evening of rock theatre. 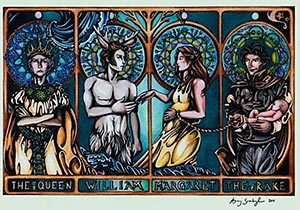 The Hazards of Love by The Decemberists.

The Rokademy Experiment Presents The Hazards of Love by The Decemberists. Performances are April 22nd at 8 PM and April 23rd at 7 and 9 PM. For tickets, visit thelmagaylordacademy.com or call the Lyric Theatre Box office at 405-524-9310. The concert is performed at The Lyric Theatre’s Paula Stover stage at their Plaza location, 1727 NW 16th St, OKC OK.