The Pollard’s In for a DISASTER! 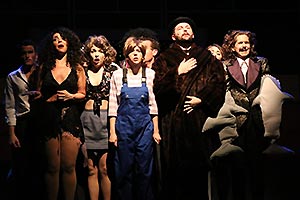 The cast of The Pollard’s DISASTER! Photo by James Michael Avance.

What a Disaster! The Pollard closes out their 32nd season with one wild boat ride. Inspired by the 1970s natural disaster movies and the music of the disco era, Disaster! is a funny, low-brow comedy romp for (almost) all ages. The casino cruise ship where the chaos plays out rocks with hits of the 70s. Soon it rumbles and shakes as an earthquake wreaks havoc and sets off a cascade of impending doom. Killer tides, infernos, gas leaks, rats and sharks all threaten the evening and everyone is just trying to get off the boat alive and fully intact.

Matthew Alvin Brown is the casino owner Tony, a cigarette wielding creep who cuts corners and skimps on safety measures. Brown is brazen and unabashed, blatantly hitting on any woman who crosses his path. Brown is perhaps the most physical actor in the show, hurling himself across the stage, giving chase, dancing, and trying everything to keep the party going and the disaster from ensuing. He becomes worse for the wear as the whole plan falls apart, losing half his broomy mustache in an explosion and loaning his limbs to a petulant shark attack. That cigarette hangs onto his mouth for dear life, dangling lower and lower with each fresh assault on the casino. It’s these subtle sight gags that take a funny show and make it side-splitting hilarious. 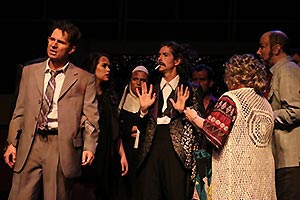 Seth Paden is Chad, a heartbroken waiter on the rebound. Paden laments his lost love while belting some of the cheesiest and best breakup songs of the 70s. Love may not be waiting for him, but death certainly is. Paden ranks up there as one of the boldest in a cast of bold. Not afraid to look absolutely ridiculous, he flops to the floor as his emotions get the best of him and the power ballads reach crescendo.

Charlie Monnot is Ted, the dedicated disaster expert committed to getting the party-goers off the ship and saving their lives. Monnot is quirky and loveable as he counteracts Brown’s slimy Tony. Monnot’s the real hero of this absurdity, the only one with half a brain. Monnot’s turn as a singer in disguise is one of the most uproarious and ridiculous moments in the whole crazy two hours. 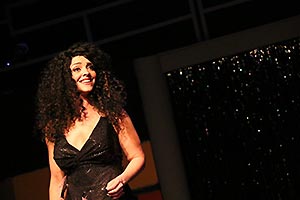 Kara Chapman is the gorgeous singer Jackie. Chapman can say a thousand words with one facial expression. She’s animated and exuberant, and her Jackie is a real modern woman of the 70s. Chapman is an incredible singer, never missing a beat or a note when wardrobes and microphones malfunction. As if that’s not enough, Chapman proves once again that she’s a true comedic genius in Oklahoma City theatre.

Jackie is mom to twins Ben and Lisa, both of whom are portrayed, simultaneously, by Erin Heatly. Heatly steals every scene with this riotous display. She wears the same costume for both characters, alternating between a short blond wig for Ben, and adding one with pig-tails for Lisa. Heatly and Chapman have an incredibly difficult duet together in which Heatly must switch between both her characters. She also switches positions on stage, popping up on either side of Chapman when it’s her turn to sing. It’s physical comedy, it’s genius and stupid all at the same time, and this musical number in particular brings the house down.

Brenda Williams is Shirley and James A. Hughes is Maury. They’re a married couple and truly adorable together. Williams is carrying a secret that incites sympathy and, of course, sparks further hilarity as that secret comes to light. Williams and Hughes are the delights of the show. They’re genuinely lovely. But Williams gets the last laugh, and the best laugh, when she becomes more than just a sweet wife. She turns quite foul indeed, but being the proper lady that she is, she makes vain attempts to stifle her uncontrollable outbursts.

De’Vin Lewis is Levora and Odra Chapman is Sister Mary. Lewis is the little dog toting, purple clad diva. Like everyone else, she’s ridiculous and hilarious, and her talent cannot be hidden behind any crazy costume or prop. Lewis is a powerhouse and it’s a better show for her presence in it. This Chapman is an endearing nun, relatable in every way as she tries to hold back and keep her true nature at bay. The friendship that strikes up between her and Williams is a tender moment in all the pandemonium.

Pollard favorites Jared Blount and Emily Pace play Scott and Marianne, respectively. Blount’s unfortunate run of bad luck is just too much for his friend and coworker Chad. Blount pulls off the tragedy with his usual aplomb and levity. Pace is determined to remain a professional career woman, even as her smart business suit and put-together professionalism both become woefully reduced. Pace sings the anthem “I Am Woman”, teaching the little onlooker Lisa that it’s okay to choose your career over love, a strong theme for the feminist movement and the 1970s. Pace shines in this moment, and her interaction with Heatly as Lisa is both preposterous and poignant.

Nobody works harder during this production than the ensemble members. Clayton J. Blair, Dakota Muckelrath, Sierra Sikes and Nicole Phillips sing and dance the night away in style, with never-ending energy and disco inspired moves. They also all play a host of minor characters, ranging from the chef to the first class snob and everywhere in between. 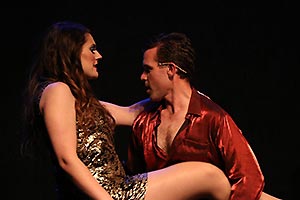 This show is full of ridiculous, stupid humor that pays a true homage to the over the top movies that defined the disaster genre of the 1970s. Director Matthew Sipress-Banks assembles a large ensemble of multifaceted and abundantly talented performers. He creates a musical that takes you out of your daily humdrums. Art can sometimes take itself too seriously, which is a shame because laughter heals more than virtually any other activity. Disaster! is the cure for what ails you. Whatever bad week, day, or month you’ve had, it’ll leave you feeling lighter and happier, and that’s worth the silliness of it all. Sometimes you just need a laugh, and that you will do in tidal waves.

Disaster! runs until June 29th at the Pollard Theatre in Downtown Guthrie. For tickets, visit thepollard.org or call the box office at 405-282-2800. Snacks and refreshments are available at the concession stand, but choose your drinks wisely. You wouldn’t want to spit your water all over the place, and it’s a definite risk with the hilarious antics of this production! 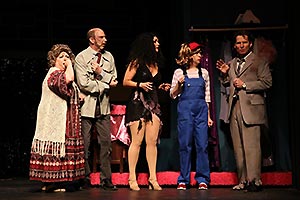