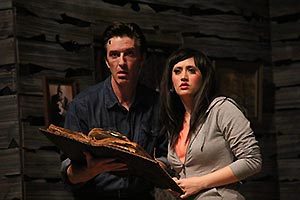 Wil Rogers and Megan Montgomery in The Pollard’s Evil Dead: The Musical.

Evil Dead: The Musical is a bloody, gory, funny, grotesque, absurd, ridiculous thrill of a parody and it’s great fun for theatre-goers. The Pollard Theatre brings it back by popular demand after a sold-out run five years ago. This go-round is exceptionally directed by Pollard company member Jared Blount, who’s not afraid to bring the gore directly to the audience. Evil Dead follows a group of five college kids on a Spring Break trip, in an abandoned cabin, in a dark and mysterious wood. What could go wrong? The co-eds are soon to find out when they unleash an evil force and awaken a bona fide Army of the Dead.

The hero of this story is the noble and brave Ashley Williams. Reprising his role as Ash is Wil Rogers. Rogers is perfectly cast in this role. Not only does he look the part, complete with that mischievous raised eyebrow, but he delivers the performance with all the arrogance and half-witted charm you’d expect from Ash. Fans of the movie will appreciate Rogers and his take on the iconic chainsaw wielding Everyman. Rogers is up for anything; fighting the undead, beheading his girlfriend, even finding new love mere minutes after his beloved’s untimely, and inconvenient, demise. Rogers is an intelligent comedic actor, and he takes whatever is thrown at him, which is quite a lot!

Megan Montgomery is also back after the 2014 production to play Linda, Ash’s girlfriend. Montgomery is hilarious and innocent as Ash’s true love. Her duet with Rogers, “Housewares Employee” is funny and over the top, and showcases Montgomery’s vocal talent and her chemistry with Rogers. Like Rogers, she too is unabashed and bold. With comedy this physical, holding back is not possible. Montgomery goes for it, and she’s the ideal girl next door who happens to meet an unfortunate beheading.

Kristin Küns is wildly wicked and undead as Cheryl, Ash’s kid sister and the first to join the Army of the Dead. Locked in the cellar by her brother after she turns, Küns spends the duration of the show popping out of the trap door on stage, endlessly mocking and tormenting her brother. She’s brazen and frightful. Those sitting nearby in the splatter zone jump out of their skin every time she pops up! It never gets old and it makes for a hysterical prank that only gets increasingly funny as her antics escalate. Küns cackles and rails like the true Evil Dead that she is. 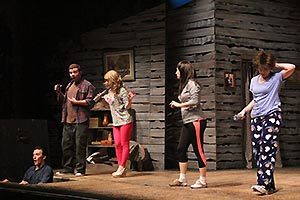 Wil Rogers (left) and cast of Evil Dead: The Musical.

Ian Cummings is Scott, an insufferable frat guy with all the appeal of a collegiate drunk who’s just after the next conquest. Cummings is appropriately hate-able, hurling commentary that is so insulting, you can’t wait to see him go. He’s aptly suited for that horror genre trope; there’s always a character the audience loves to hate. Cummings plays it up and is delightful as the wretched Scott, a role that must be tons of fun to play.

Laura Renfro is fun and infuriating as Shelly, Scott’s flavor of the week. She’s smart and shrill as Annie, the real heroine of the tale. Renfro plays both roles brilliantly, relying on charm and sex appeal, as well as wit and girl power as she sweeps in to save the day. She’s a victim of the ever-present evil demons that keep wrecking her love life. Renfro is so quick-witted, sharp and intelligent, you simply can’t take your eyes off her.

Jon Phillip-Olson is Jake, an ambiguous local who the gang enlists for help. Phillip-Olson is menacing and creepy as Jake, with a malevolent smile and disarming Southern drawl. He’s misunderstood and of course, underestimated, and has an uproarious change of heart as he shows his true colors.

Kaleb Michael Bruza is the strong, silent type as Annie’s companion Ed. He gets his time to shine, however, and he goes out with a bang. He earns his applause, and it’s the loudest of the night. 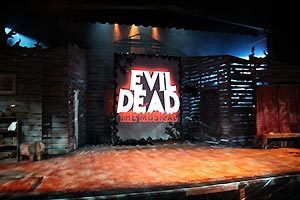 This cast is obviously having fun, dancing and singing the night away in one ludicrous scenario after the other. The first two rows are The Splatter Zone, and they deliver on that promise. The actors spray scented, kool-aid colored “blood” on the audience several times, and Act II becomes a bloodbath for the ages. It’s a memorable, unique theatrical experience that keeps fans of the movie franchise and the stage play coming back for more and more. Evil Dead is certain to become a staple for theatre-going at The Pollard, and when they inevitably bring it to back to life again, they must include this bloody great cast once again. With Blount at the helm, and armed with their cursed Necronomicon, their chainsaws and blood sprayers, they’re not soon to leave anyone dissatisfied, alive or otherwise, for as long as they’re doing this show.

The Pollard’s revival production of Evil Dead: The Musical is sponsored by The Gayly and runs until November 2nd at the Pollard Theatre Company, 120 W. Harrison Ave. in Downtown Guthrie, OK. A few “splatter zone” seats are still available, as well as plenty of “buffer zone” seating and regular seating. For tickets, visit thepollard.org or call the box office at 405-282-2800.