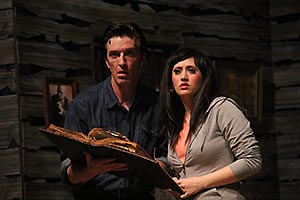 Wil Rogers and Megan Montgomery in The Pollard’s Evil Dead: The Musical.

Five years after its original run, The Pollard Theatre company is bringing back one of their most popular shows to date. Evil Dead: The Musical returns in a new Halloween tradition for The Pollard, complete with their wildly popular Splatter Zone. It’s just as crazy and messy as it sounds. No one is safe from splattering, albeit theatrical, blood in the Splatter Zone. Those on the outskirts, in the buffer zone and regular seats, are somewhat safer, but no guarantees. Regardless of where you sit or how splattered you get, you’re in for a fun show. The Pollard promises “rock ‘n roll demons, blood, dancing zombies, more blood, and an unforgettable good time.” That’s no shock, The Pollard always produces some of the best theatre a patron can find.

About bringing the show back again, after its original run in 2014, Blount says “There are several reasons I wanted to do this show again, but the most important is I hope to create a staple for the Pollard. You can’t see Evil Dead everywhere, and I think the Pollard productions are a unique theatrical event. I hope it’s one that generates an even stronger audience so that we can keep bringing it back. I want Halloween to become synonymous with Evil Dead at the Pollard.”

As a first-timer to the show, I asked Rogers to answer some questions about the musical and about the experience. Since the musical tackles such serious and heavy topics- zombies, the undead, blood and guts- I knew I could count on him to really answer honestly.

Evil Dead has a loyal following; those fans of the movies and the stage version are known as Dead-ites. But there’s always room for more, so count us in and read his exclusive Q&A below:

OKASH: Tell us about Evil Dead! What’s most exciting about returning to play this role again?

Rogers: Instead, let’s talk about Me. I was born in the most humble of ways – not making much of a fuss, until I had to… until the public demanded it. ….I’m sorry. Bruce Campbell’s comically inflated faux-ego is infectious. Every night, I get to look at his autograph in our prop Necronomicon, which my friend and director, Jared Blount, got signed after our first run five years ago.

EVIL DEAD: THE MUSICAL is a perfect musical cocktail of blood, based on the three Sam Raimi films, The Evil Dead (’81), the parody sequel Evil Dead: Dead By Dawn (’87), and Army of Darkness (’92). Ash Williams (Campbell) is the hero of the films. Even before the third movie was in theaters, I named my first pet Ash. After our 2014 production, I wanted a chance to perform it again and again.

This cast and production crew is a dream come true.

OKASH: What’s your advice for first-timers sitting in the Splatter Zone? 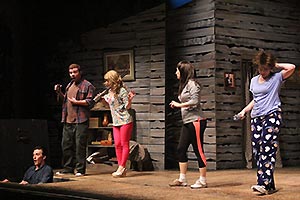 Wil Rogers (left) and cast of Evil Dead: The Musical.

Rogers: Don’t leave your mouth open during the Second Act. And wear a white shirt you wouldn’t mind framing to remember this gory experience for the rest of your life!

OKASH: Do you relate much with your character? How do you think you would react if faced with the same circumstances he is? Does he make good decisions or terrible ones?

Rogers: …Let’s talk about me again. Aside from dramatic roles, my best experiences in nearly thirty years of theatre have been either in children’s theatre, Shakespeare, or campy musicals, where you often break the fourth wall and talk directly to or wink at the audience.  That’s my bag! I love it!

These audiences really know Ash …or not. This show gives them the chance to get sprayed by the same blood as him in that cabin in the woods. They get to recite those favorite lines from the movie like “This is my Boomstick!” with this iconic pseudo-hero with a chainsaw.

OKASH: Is Ash the hero of this story? What’s the coolest thing about him?

Rogers: Of course he is! In any story, he would be the hero. Ashley J. Williams is the only character that could punch Chuck Norris, insult him after, and get away with it.

BONUS Question (Extra credit): What’s your favorite musical number in the show? And why?

Rogers: I would have to say it’s “Housewares Employee”. It’s a duet with my girlfriend Linda (Megan Montgomery).  Along with Jon-Philip Olson as Jake, we both are reprising our roles from ’14.  Funny thing – we played together as Agent Starling (Jodie Foster) and Buffalo Bill in another parody show in ’15 – Silence: The Musical, which is based on Silence of the Lambs.  I love working with her!

It’s an absolute blast getting to step it up and play this couple again, trying to keep from laughing the entire song. She’s hilarious! 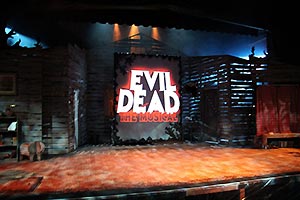 All kidding aside, Evil Dead: The Musical is going to be a gory, great time for Pollard patrons this October.

Evil Dead: The Musical, presented by The Gayly and The Pollard Theatre Company, runs October 11th-November 2nd at The Pollard Theatre, 120 W. Harrison in downtown Guthrie. Tickets are still available for the splatter and buffer zones, as well as for the regular “safe” seats. Visit thepollard.org to get yours.