The Lyric Depicts Real Life Drama with Premiere of Frost/Nixon 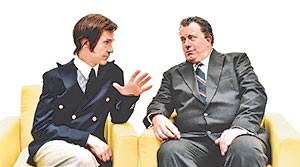 The Lyric is back at their Plaza District Theatre with the explosive Frost/Nixon. The 2006 play by Peter Morgan depicts a real-life, televised interview that occurred between two disgraced public figures. In 1977, David Frost landed an interview with the recently resigned President Richard Nixon. All eyes were on the two men as they both tried to resurrect their fallen careers. The play was turned into a movie in 2008 by Ron Howard and starred the original actors, Frank Langella as Nixon and Michael Sheen as Frost. Now, at yet another time of political turmoil, Frost/Nixon is set to grace the Lyric’s Plaza Stage in this Oklahoma City premiere. And it promises to ignite audiences as much now as the original interview did then. Frost/Nixon depicts an interesting dynamic between the media, which reports the news, and the political figures who create that news. Naturally, we had to take the chance to discuss this unique, and often volatile, relationship between “politics and the press” with the show’s stars. Matthew Alvin Brown is David Frost and D. Lance Marsh is President Nixon. They both answered a Q&A for us below. Hold onto your hats, it gets fun!

OKASH: Tell us about playing David Frost! How are you preparing for this role?

MAB: I’ve been reading a lot of books about this whole event. David Frost’s account of that moment in history has been particularly helpful, of course, but it’s been interesting to read other people’s accounts as well. It’s been helpful to study the original interviews as they are available to watch online. So. Lots of that.

OKASH: Frost/Nixon depicts real events that were broadcast over national television. What are you hoping those younger audience members will learn about this media sensation that occurred before social media?

MAB: I’m not sure. Media is such a different animal than it was then. My hope is that by accentuating the gravity of these original National broadcasts, younger audiences will see patterns that have developed throughout history and connect them to the immediate danger that our country is facing under this current administration.

OKASH: This show features politics and the press, and in many ways, politics versus the press. Do you think that aspect is still relevant today, and why?

MAB: I think it’s more relevant today than ever before. The leader of the free world relentlessly barks to his lemmings that the press is the enemy of the people. So. Yeah. I think it’s super and sadly relevant.

OKASH: Do you think news media is still important, or should we be silenced?

MAB: Again, I think the media is more important than ever before. We have to speak truth to power…or else…!!!

OKASH: Tell us about your role. How does it feel to be playing the most historically disgraced president, especially at this time of political upheaval?

DLM: Well, it’s a very, very interesting time to be playing this role, obviously.  I don’t want to make too much of the current parallels in the political world of today, but I will say that Michael Baron deserves a lot of credit for programming this show when he did. It hits at a time when we are all talking about issues that seem to weave in and out of the play, about our leaders (past and present), about the potency and power of the media and their duties to a free society, and the misuses of power that can come to men who sit in the Oval Office. Michael asked me to play this part 18 months ago. So, he was thinking about this moment a long time before the phrase “Mueller report” became a household word.

You ask me how it feels to be playing Nixon now… it feels important.  It feels like we are making a play that, rather than come at the audience with answers, it churns up questions. And in a democracy, can we ever ask too many questions?

OKASH: In many ways, the Nixon era defined the idea of a political scandal. It’s very current in popular culture today, with shows like Scandal and even Hamilton. What other political scandals are interesting to you?

DLM: I suppose that if you are a culturally and politically aware citizen (which I aim to be, although probably fall pitifully short most of the time) then you are shaped by the scandals and major political moments of your adolescence, when many of us discover that the childhood sense of “right and wrong” applies to something bigger than ourselves.  I’m turning 53 during the rehearsals for Frost/Nixon, so for me, I came to political awareness during the Reagan years. Iran/Contra and Oliver North and Nicaragua and shady deals with Iran to keep the prisoners until after the election with Jimmy Carter were the whetstone of my youthful outrage. I remember marching to protest the invasion of Grenada when I was in high school.

OKASH: In preparing to play President Nixon, how have you found that you’re similar? How are you different? What do you think he was like as a person?

DLM: Nixon is a real batch of contradictions. He’s very smart, but he makes terrible choices. He describes himself in the play as “hurt and suspicious” and that seems right, and those insecurities seem to drive him towards the cliff. But he also was a dreamer, and a true believer in America, or at least the America that he could see. He’s a loving father and a doting husband, and arguably the most skilled foreign policy operator in the White House in the last 50 years. But also, a crook. He laid the groundwork for the end of the Cold War, and also brought sourness and distrust to the domestic political realm that we are still feeling reverberations from today.

I think (hope, pray) that I have more quietness of spirit than him, and that I’m more trusting than he was. I do think we share some things: I’m driven like him, and want to do big things like him. And I guess there is a part of me that, like this Nixon in the play, fears that I’m a little man. I understand where his sense of inferiority comes from, I guess, and how that drives him.

I’m not sure I would have liked him, if I had met him.

But this is a problem for the actor. You can’t play a man in whom you don’t find something that you can love. So I am looking for that thing that is lovable in him. I’m writing this the night before we start rehearsals, so perhaps I will find other things as we play. But I think right now, the place where I start loving him is his ability to be bewildered by himself, and still keep trying to figure himself out. His ability to see, and articulate, his own flaws. The Nixon in the play is very aware of his weaknesses (perhaps too aware of them) and there is a soft spot in my heart for anyone who is not so set in his ways that he can keep questioning himself, even after everything that he goes through in life. 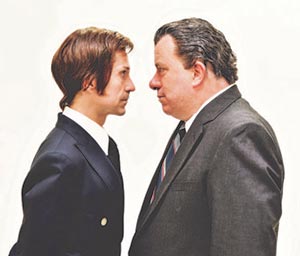 Frost/Nixon runs September 4th-22nd at Lyric at the Plaza, 1725 NW 16th St. in OKC. Tickets are available at lyrictheatreokc.com or the box office, 405-524-9312. This show is recommended for mature audiences only due to strong language and mature thematic elements.