The Lyric Continues a New Holiday Tradition with A Christmas Carol 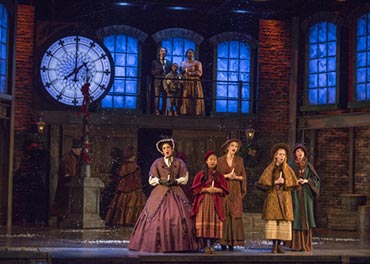 The holiday season is soon to be upon us! This time of year, we hold onto traditions and make new memories. The timeless Charles Dickens story A Christmas Carol is a subtly profound tale that’s been done by everyone from Patrick Stewart to The Muppets. Taking a seat at the table of memorable versions is Lyric Theatre of OKC in its eighth production of the show.

Also returning for the eighth production is Lyric Favorite Susan Riley. OK Art Scene and Hurd caught up with her to tell us about the play and what she’s excited about this holiday season.

OKASH: tell us about your role! Is this the same role you’ve played all 8 years? What’s exciting about this year specifically?

Susan Riley: I play one of the solicitors at the beginning and end of the show, and Fred’s sister in his party scene, but I also carol around the stage in between scenes, dance in the Fezziwig party scene, and make an appearance at other points in the play as well. This will be my third year in this particular role.  The first five years, I played Mrs. Cratchit. Then in 2016 – we changed the show completely – a new set, new costumes, and a whole new cast of characters. That’s when I took on the roles I play now.  In the original story – the two solicitors at the beginning were men.  Our production uses women. It adds a little bit of softness to the story. You watch as Scrooge turns down these women in such a curt and miserly fashion – shocking behavior for that time and day. The change towards the end of the play is quite noticeable. As for what is new, even though the script stays the same – we are always able to change things or dig a little deeper into scenes year after year to find those moments that will ring true with the audience. You never know what will change until we actually walk into rehearsal.

OKASH: what are you hoping audiences will experience when they come to the show this season?

Riley: This show is magical.  Instead of just sitting back to watch a play, I feel that the characters really invite you into their world to EXPERIENCE it.  You hear the clip-clop of horses as you walk into the theatre.  The characters talk to you before the action starts onstage. We walk through the aisles and fly overhead, so you become fully immersed in what you are watching. We always want people to feel uplifted and excited after the show.  As actors, you can’t help but be swept up in the magic yourself.  Even now – going into my 8th year, I still get misty watching Scrooge’s transformation onstage. I usually shed a few happy tears watching the audience rise to their feet at curtain call.  It’s then that I think “yay, we’re doing what we set out to do.”

One of my favorite parts of the show – and I’ve been lucky enough to do this all 8 years – is when we give our own audience a chance to give back.  We ask them to reach into their pockets and donate whatever they can on the way out the door.  All the money goes to the Regional Food Bank of Oklahoma.  Throughout the years, we’ve been able to raise nearly $150,000!!!!  That kind of money is life changing! 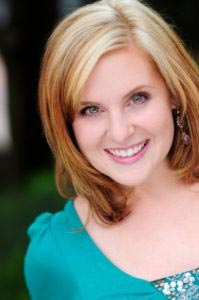 Susan Riley returns this year for Lyric’s A Christmas Carol

OKASH: let’s talk about the importance of Christmas traditions. How is this show becoming an important tradition for you?

Riley: Christmas Carol has BECOME my Christmas tradition. In a way, as actors, we sacrifice our own Christmas season to be able to do this.  We go into rehearsals mid-November, we open right after Thanksgiving, and then we perform 8 shows a week until Christmas Day. Most of us do this while working full-time jobs as well.  Our families are very understanding. You usually don’t make it to Christmas parties or holiday gatherings – and it gets very tough to get all of your shopping down in between shows on Saturdays and Sundays. However, I wouldn’t trade it for the world. Our cast of characters has become its own Christmas family. There are quite a few of us who have done the show all 8 years and there is a very special bond there.  We could go all the rest of the year without seeing one another, but when we come together on the first day of rehearsals – it’s as though no time has passed at all. It’s a caring, supportive group of people. We even have our own traditions inside of the cast – my favorite is the Ghost of Christmas Awesome. It started a while back when one of our Christmas Carol kids lost his iPod (remember those?) and the adult cast collected money (something actors don’t have a lot of) and bought him a new one simply signed “the Ghost of Christmas Awesome”. The Ghost of Christmas Awesome has come back every year for someone who really needs it. As I said, we are a family.

Dirk Lumbard returns for his third year as Scrooge. Charlie Monnot is Bob Cratchit, Thomas E. Cunningham is Jacob Marley/Mr. Fezziwig/Old Joe, Mateja Govich is the Ghost of Christmas Present and Susan Riley is the solicitor. Matthew Alvin Brown is Topper, Lexi Windsor is Belle, Jennifer Teel is Mrs. Fred and Brenda Williams is Mrs. Dilber. The cast includes Andi Dema as Fred/Young Scrooge, Natalya Fisher as the Ghost of Christmas Past and Kizzie Ledbetter as Mrs. Cratchit.

Start a new Christmas pastime this year with your family at Lyric’s production of this classic Christmas tale! Lyric Theatre’s A Christmas Carol is presented by Devon Energy and runs November 23 – December 24th at the Lyric Plaza Theatre, 1725 NW 16th St, OKC OK. The Plaza District is a lovely place for an evening at the theatre. For tickets, visit lyrictheatreokc.com or call the box office at 405-524-9312. Don’t be a Scrooge! 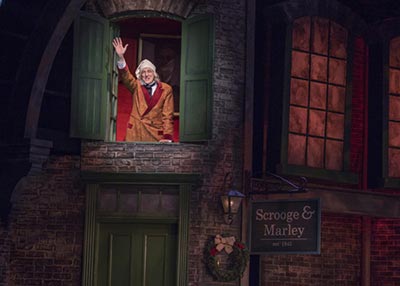