Lyric Theatre’s Thelma Gaylord Academy produces top-notch, professional quality theatre for OKC patrons. By utilizing their students, they present a unique experience and a chance for young artists to hone their artistry and technical skills. Their fall production of Mary Poppins is challenging, a technical marvel, and an absolute delight. It’s a spoonful of sugar, and it goes down joyfully.

Mary Poppins is a beloved story for the ages. The 1964 Disney movie starring a youthful Julie Andrews as Mary and Dick Van Dyke as Bert is loved and cherished by the young and old. That is apparent by watching the faces and reactions of the multigenerational audience on opening night. The kids marvel and awe, and the parents, and grandparents, shed tears of joy upon seeing a long-lost childhood memory come back in full detail.

PL Travers’ story of a magical nanny who descends from the heavens to rescue the Banks children was developed into a stage musical by Cameron Mackintosh and Downton Abbey’s Julian Fellowes. It premiered in London’s West End in 2004, followed by a Broadway run in 2006. The stage version features all the fantasy of the movie, and it includes the iconic songs as well as additional music by George Stiles and Anthony Drewe.

Directed by the Academy’s Director of Primary Education Rozz Grigsby, the multifaceted cast creates magic and whimsy on the stage as they bring this treasured story to life for all ages. 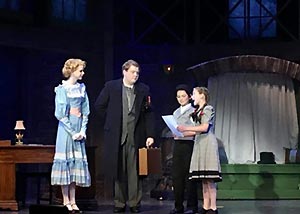 Emily Faith is Mary Poppins, and she’s truly supernatural. She’s regal and sweet as she sweeps in to become the new nanny for Jane and Michael Banks. Mary takes the children on adventures, to include walking in the park and going to the bank. As mundane as that may sound, the beauty of this character is her ability to spark imagination. Faith sings beautifully and is so dynamic and magnetic, the audience is enraptured by her. She must create a larger-than-life character, as Mary is idolized by the children. Faith makes it look easy, and complete with her clear, pure singing voice, she presents the perfect portrayal of this wonderful character.

Mary’s charges are Jane and Michael Banks, portrayed by Samantha Rother and Cyrus Glossup. Both are poised and professional, outstanding young talents. They’re hard workers too, and they keep the audience engaged with them for the entire production. They both have timing and interaction skills to be envied by the most experienced actors. They’re natural and effortless, and have chemistry and trust with Faith as Mary. The trio works well together, and they let each other shine in due turn. They’re three to watch out for, and professionals everywhere should take a few notes on how to share a stage from them. 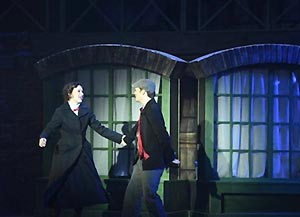 Mary and Bert in Mary Poppins.

Garrett Langley is Bert, the mysterious Chimney Sweep who also serves as Narrator. There are big shoes to fill here. The character played by Dick Van Dyke is one of the most memorable in cinema history. Langley plays the role his own way. He’s a lovely Bert and he balances Faith beautifully.

Mr. and Mrs. Banks are portrayed by David Flynn and Lily Voth. Flynn is stern yet gracious with the children, a changed man by the end of the show. Voth comes into her own as Winifred. Sharp and light on their feet, they make a good pair. Mary Poppins is there for them as much as she is for the children, and they accept her place in their lives.

Justine Rogers is terrifying as Miss Andrew, a mean nanny who comes to call when Mary mysteriously disappears briefly. Miss Andrew is the former nanny of Mr. Banks, and she incites fear in grown men. Rogers is a powerful presence, sinister, creepy, and every bit the Disney villain. The shopkeeper Mrs. Corry is brightly played by Sophia Sammons. She’s a bubbly, boisterous vision, bursting with personality and becoming an instant crowd favorite.

McKenzie Irby is Miss Brill, Duncan Rumbaugh is Robertson Ay, Jaylynn Nash is Katie Nanna, Presley Harrington is the Policeman, Gracie Boyd is Miss Lark, James Zumwalt is Admiral Boom, and Taylor Grigsby is the Park Keeper. Neleus is played by Ashley Manners, The Bank Manager by Thayer Dycus, Miss Smythe by Emma Poindexter, and Von Hussler by Nate Peterson. Estella Stevenson is Miss Northbrook, Alex Ille is the Bird Woman, Charlee Barks is Annie, and Cassie Magrath is Fannie. There’s not a weak link in the bunch, and they work together like a real team of pros.

And the choreography!! Choreographed by Kassie Carroll Downey, each musical number is more complex than the last. The tap dancing during the chimney sweep tune “Step in Time” is crisp and spirited. It’s a rare treat to see tap dance on stage. The visual grace and rhythmic acoustics it provides are brilliant, and the students are artful technicians of this craft. 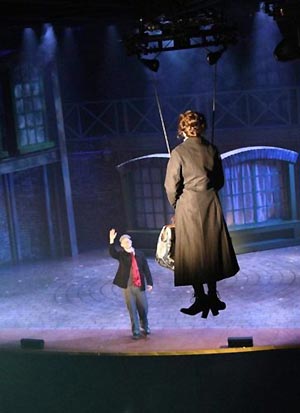 Mary flies away and Bert waves goodbye in Mary Poppins.

A hit song is “Supercalifragilisticexpialidocious”. During this number, the cast is superbly in sync, dancing, singing, and spelling the infamous made-up word that Mary creates with letters she “buys” at a “conversation store”. They spell it out for the audience, quickly and with visual letter cues. It’s adorable, hilarious, and more than a little impressive. Nobody misses a beat, or a letter, and the frenetic energy the cast dispels onto the audience gives everyone the time of their lives.

The technical aspects of the show are complex and well done. They serve to add to the fantastical quality of Mary Poppins, and it wouldn’t be the same show without them. When Mary is hooked onto the fly rail and flies up and away from London, primly holding her suitcase and pointing her feet out just-so, there isn’t a dry eye in the house. Lighting design by Fabian J. Garcia creates rainbows, whimsical color blocks, and a charming atmosphere for Cherry Tree Lane.

Mary Poppins is in essence a story of childhood itself, a reminder to find magic in everyday life, to break out of the tiny parameters we set for ourselves, and to stop and smell the roses. Or even, perhaps, to go fly a kite. Well done Lyric Theatre and the Thelma Gaylord Academy!