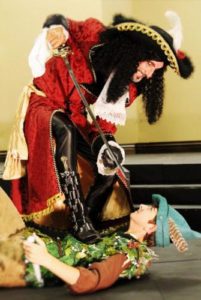 The 3rd Act Theatre is off to a solid start with their first production, “The Lost Boy” by Ronald Gabriel Paolillo.  Everyone knows the story of Peter Pan by J. M. Barrie and “The Lost Boy” is the story of J.M. Barrie’s writing Peter’s story. “Peter Pan” was first staged in 1894 and the first Barrie story exploring the boy who never grew up, “The Little White Bird” shows how the story of Neverland and a permanently young boy who can fly was developed by J.M. Barrie.

The play “The Lost Boy” was written by Ronald Gabriel Paolillo, an actor turned playwright.  Many remember him as Arnold Horshack on the iconic television series, “Welcome Back, Kotter” and Paolillo’s career as an actor solidified.  The delicate genius of Paolillo and Barrie is expertly illuminated in this production directed by Amandanell Bold, a founder of the 3d Act Theatre and President of the Board of Directors.  Bold’s name frequently pops up in association with boldly conceived productions, which makes her name quite apt, as she is clearly not afraid to lead the actors on a journey of depth to establish their characters.

In “The Lost Boy” Barrie has returned home to his  Scottish village Kirriemuir visiting his mother as well as his brother Davey’s grave.  He feels responsible for his brother’s death, and his mother seems to blame him.  While there he establishes a friendship with a former bully, Sean O’Rourke, and his wife, Maureen.  Connecting closely with Maureen, Barrie tells her the story of Peter Pan as she is interested and open.  However, it is clear; the story is being written for his mother and himself—to bring Davey back and peacefully reconciling to his death beneath the ice at only 14 years of age.

Justice Wickstorm plays James M. Barrie with skill, and a thickish but quite understandable Scottish brogue, becoming more pronounced as he has returns to his home a successful writer.  Under Bold’s direction, Wickstrom displays the conflicting emotions of an unloved and least favorite son, and the wish for his mother’s love.

Jamie Brewster appears with a convincing hard shell surrounding the grieving interior of a broken hearted woman.  Her performance is remarkable, and on stage with Wickstrom, the relationship appears heartrending.  One can see the lack of love, and the desire for love in both characters, and they play together beautifully.

Holly McNatt plays a number of roles, Wendy Darling, Liza and the intuitive Maureen O’Rourke.  McNatt does a sensitive job of playing this delightful matron of the era.  She is reminiscent in some ways of today’s  bored housewife but remains loyal to her husband, understanding the limitations of a relationship with Barrie.  Her willingness to be also a loyal friend is apparent in McNatt’s delicate handling of their connection.

Megan Rich is Mary Ansell (Mrs. J. M. Barrie) as well as Tinker Bell.  She is delightful as Tinker, a somewhat outspoken fairy with a big heart.  As Mary, the character is equally abrasive, but not at all lovable as Tinker is.  Rich manages to delineate the two characters beautifully as well as playing Ursula and Hanna Bell.

Keegan Zimmerman is also several characters, but primarily he is Sean O’Rourke, the child bully grown to a pleasant businessman.  He welcomes Barrie with open arms, not forgetting his child-hood cruelty, and making up to Barrie for those bad experiences. 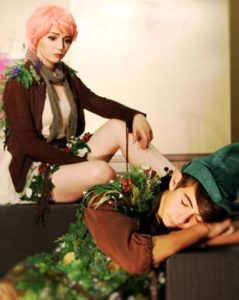 Don Taylor is Deacon, Gerald Du Maurier, and The Old Crow (Peter’s father figure) all with great skill as usual with Taylor.  However, he shines as Captain Hook.  A Captain Hook with a frightening but amusing, rather tongue in cheek demeanor, and an uncomfortably modern moral code.  Taylor is at ease portraying outrageous characters and he certainly brings them to life with a natural feasibility adding to the humor.

Two brothers, Kyler Lanning and Brance Lanning take on the roles of the young boys.  The two Lanning’s are extremely talented young players who have been in a number of roles in Oklahoma City over the years.  Brance Lanning plays Davey Barrie, the older brother killed in the skating accident and then,  he takes on the role of Peter Pan, another boy who will never pass into adulthood.  Kyler Lanning is the young  J.M. Barrie, (Jamie) with great glee as well as Michael, Young Smee and Adora Bell.  Kyler Lanning is equally adept at creating different personalities.

Bold’s exciting direction on a lovely set reveals the enthusiastic camaraderie among cast, crew and the very active board that makes up the 3rd Act Theatre Company.  The founding Board of Directors includes Bold as President with Don Taylor as Vice President.  Stage manager Michele Fields is Secretary, Allyson Kubat is Treasurer and Christine Jolly is founder.  It is immediately evident that every member is involved in production.  Jolly is clearly adept in many disciplines and available in many categories.  Working with this theatre will be a wonderful new opportunity for the many highly talented actors in the Oklahoma City metropolitan area.

Justice Wickstrom as J.M. Barrie with the memory of his older brother Davey Barrie

This production is a thoughtful beginning for the new theatre company located in the Shoppes at Northpark at 122nd and May Avenue.  They have an interesting season coming up with “Dracula” opening October 3, 2019, and in 2020, “The Importance of Being Earnest” in February followed by “Moonglow” in April.  We can look forward to an impressive contribution to Oklahoma City’s theatre community with the addition of the 3rd Act Theatre Company.  For information visit www.3rdacttheatre.com or check out their Facebook page.  “The Lost Boy” will run for another weekend with an 8:00 pm evening curtain and a 2:30 Sunday matinee schedule this is a definite choice for anyone’s entertainment calendar.