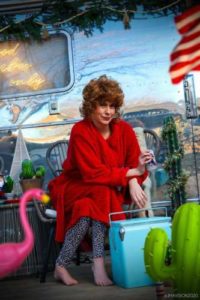 “The Great American Trailer Park Musical” has, since its 2005 premiere, entertained and amused audiences with a story from the other side of the tracks.  Betsy Kelso and David Nehls collaborated to create a hilarious musical with Kelso doing the book and Nehls the music.  They certainly succeeded in this titillating trailer trash treat.

Kara Chapman who has been astounding Oklahoma City metropolitan area audiences with her superb vocals and excellent acting skills has added more accomplishments to her resume.  She is directing “The Great American Trailer Park Musical” at The Boom in Oklahoma City.  She is also doing the choreography with great success, the set, costume design and lighting.  Fortunately she is able to rely on the accomplishments of Michael Stafford, musical director whose contribution is delight to the ears due to the vocal abilities of the cast.

Directing a show at The Boom is a little different.  The Boom is Oklahoma City’s premiere LGBT nightclub and dinner theatre.  There is a little more interaction between performers and audience, a blurring of the fourth wall in this kind of venue.  Nevertheless the servers are nearly invisible, expert at taking care of the guests dining and wining requirements without interfering in the entertainment delights.

Chapman has assembled a great cast of talented actors, bringing in some new blood and taking advantage of the great talents performing regularly at The Boom as well as outside the venue.  All the shows at The Boom are geared for the alternative, but appreciated by the mainstream.  “The Great American Trailer Park Musical” is directed toward a group that is of a lower socio-economic status, to be politically correct.  To be politically incorrect, as the show itself is, “The Great American Trailer Park Musical” tells the story of poor white trash, uneducated, beer-guzzling butt-crack showing group who spend their lives in the ‘exclusive manufactured housing community’ known as Armadillo Acres in balmy Florida. 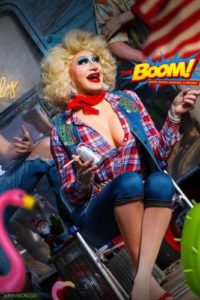 The park is managed by Betty, a hard-working, hard playing hard-to-believe slightly exaggerated beauty with a voice almost as deep as her cleavage.  Hanging out with Betty is Lin, (full-name Linoleum, cause she was born on the kitchen floor).  Joining these two grand dames of Jerry Springer types is Pickles, a hysterically pregnant innocent.  These three gals form the ‘chorus’ of the piece with great vocals and wonderful comedy.  Carmen Deveraux (Betty) has returned to the stage as a musical theatre actress for the first time since college.  No stranger to performance, Deveraux pulls out all the stops and belts out a song like a pro.  Joining her is Megan Montgomery as Lin.  Montgomery is a very versatile actress with great pipes in every capacity.  Her sense of comedy and timing are excellent and allow her to shine in her performance.  The third of this amazing trio of trailer park floozies is Kristin Küns as Pickles, sweet and innocent, just married to a loser; she apparently imagines her pregnancy while taking life in stride.  And what these three can do with their musical numbers is phenomenal; in particular the little ditty entitled ‘Flushed Down the Pipes’ effectively using the plunger as a prop.

Norbert and Jeannie have been married for about 20 years and are still living in their original honeymoon household.  Norbert is a toll collector, frustrated with his wife’s fear of leaving the trailer.  Jeannie developed severe agoraphobia just after their baby boy was kidnapped.  Norbert is begging her to try and go outside to the ice capades in celebration of their 20-year anniversary.  She tries, stepping one stair level at a time.  Tyler Clark plays Norbert with pizazz along with his pipes not to mention plenty of pizza and beer.  Erin Heatly is Jeannie, struggling to maintain a life in spite of her severe handicap.  Heatly reveals an intelligent woman, limited by circumstance with subtlety using her grand talent in song as well as acting impressively.

Enter the stripper from Oklahoma City.  Pippi is running from her abusive boyfriend and attempts to hide in Armadillo Acres.  She rents a trailer at Armadillo Acres and finds a job stripping and dancing at a nearby gentlemen’s club.  Laura Renfro is Pippa, certainly another great musical theatre talent.  Her voice and carriage are excellent.  She finds new companionship in Norbert.  Norbert still loves his wife, but he is out of patience with her condition and finds solace in his affair with Pippi.  The love triangle that is created is familiar, yet the three principals, Jeannie, Norbert and Pippi are played beautifully and uproariously by three highly talented performers, Clark, Heatly and Renfro.

Soon Duke, the marker-sniffing abusive boyfriend arrives.  He is not a great detective but it isn’t too hard to get on Pippa’s trail and he comes to Armadillo Acres with mayhem on his foggy mind.  He threatens Jeannie and ultimately everyone with his weapon.  Joshua McGowen plays Duke with marvelous realism just over the top enough to be gut-busting as he whips out his magic marker for a snort of solace. 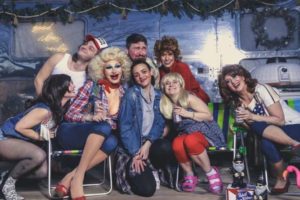 These seven cast members under the great skill of Chapman’s directing and Stafford’s musical guidance make this musical comedy outstanding rollicking entertainment.  They all create characters just a little ridiculous, with behavior that is understandable under the circumstances.  The exhilarating plot created by the Kelso and Nehls writing team is brought to life by Oklahoma City’s own Kara Chapman and her cast of savvy actors and performers.  Look for Chapman’s direction soon in the upcoming presentation of “You’re a Good Man, Charlie Brown” opening at The Pollard Theatre in Guthrie, April 10, 2020.

“The Great American Trailer Park Musical” plays at The Boom February 7, 2020 to March 14, 2020.  The Boom begins serving dinner at  6:30 p.m.and the curtain goes up at 8:00 pm.  For tickets and information about this show and others visit www.ticketstorm.com or call 866-966-1777.  The Boom is located on the famous OKC strip, 2218 NW 39th St. Oklahoma City, Oklahoma.  The Boom is open Tuesday through Sunday and they can be reached at 405-601-7200, or visit www.theboomokc.com.  “The Great American Trailer Park Musical” is some of the best musical comedy to be seen and enjoyed by all adult patrons, mainstream as well as alternative, in a friendly and inclusively welcoming atmosphere. 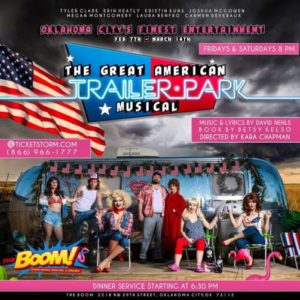