The Christmas Train Has a Flat at 3rd Act Theatre. 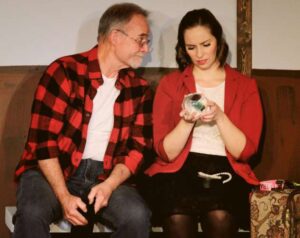 Rob May as Leo Tannenbaum (left) and Caitlin Cairns as Donna Fay Cummings. The Christmas Express photos are courtesy of April Porterfield

3rd Act Theatre is presenting “The Christmas Express” a delightful little Christmas comedy by Pat Cook.  Living in a charming small town called Holly, the commonly held small town fate has local business suffering and the Depot for the train is certainly no exception.

The Manager of the Holly Railway Station is Hilda Trowbridge played by Christine Jolly and her assistant/porter is Satch Brunswick played by Joe Burleigh.  Hilda suffers from severe depression and general grumpiness and Satch is exactly the sort of cheery fellow, exuberant in his action in spite of Hilda’s lack of interest in any activity that isn’t complaining.   Friends and acquaintances pop in for various reasons offering Christmas cheer.

Penelope Blaisedale played by Rachel Morgan is Editor/Journalist of the Holly Herald the local newspaper and Maggie Clooney played by Kristy Salisbury is the mail carrier.   Additionally Donna Fay Cummings played by Caitlin Cairns has decided to leave her husband two days before Christmas!  Her husband Jerry Cummings played by Malachi Alexander Campbell; a stereotypically clueless male shows up to find out why she is leaving. In the midst of all this we also have two mysterious strangers, one of them has a touch of pixie-ish magic and the other is abruptly indifferent to the town, and must be there to close the Depot, leaving the town of Holly with no railroad!  Myrna Hobsnagle the city hall’s clerk appears, but she has no answers.  In this role is Syd Cricklin who originally stage managed the show, but steps in after the original actress became ill.  It is not Covid, but it is a severe cold and we are sure that Caprice Sorg will recover shortly.  Cricklin does a fine job considering she has only had the part for 1 day, but fortunately it is smaller  part! 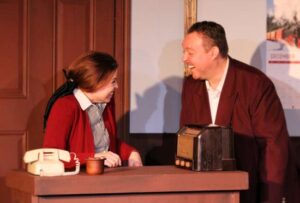 Things ultimately resolve themselves in unexpected ways, to the satisfaction of all concerned, even our unknown characters.  First to arrive is the rather jolly and kindly Leo Tannenbaum played by Rob May, who is surprisingly perfect for the role.  The other stranger is the ominous Mr. Fairfax played by Doug Carlton.  As all the problems are finding resolution, Deborah Smith played by Elizabeth Garrison appears and she is somebody’s long lost daughter…perhaps the child of a mysterious stranger, or has a pillar of the community actually managed to keep such a secret for so long a time?

The play is directed by C.W. Bardsher, who also called the cues for the show as the stage manager was otherwise occupied.  All of the action takes place in the lobby of the depot in Holly, and a familiar sort of small-town ambiance is prevalent.

“The Christmas Express” refers to a special Christmas train that used to thunder through the town on Christmas Eve, and the term has come to mean general Christmas cheer in the town slowly disappearing into obscurity.  The characters are all amusing, bemusing to the audience.  It is fascinating that each character has been portrayed with skill and interest, however, the timing is off and that is exceedingly unfortunate.  Timing is critical in comedy and without it, the skill of one or many actors cannot redeem  show.  Some of the difficulty may be due to the last-minute change in actors for the Myrna Hobsnagle role although she is not on stage for a great length of time, and does not have any impact on the majority of scenes.  The cast needs another week of rehearsal to get the timing issue cleared up.  When that happens the show will be amusing, but without good timing it is a tragic example revealing how important comic timing is. 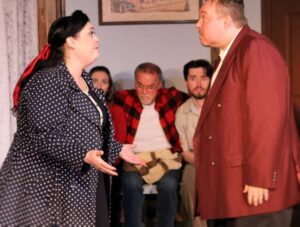