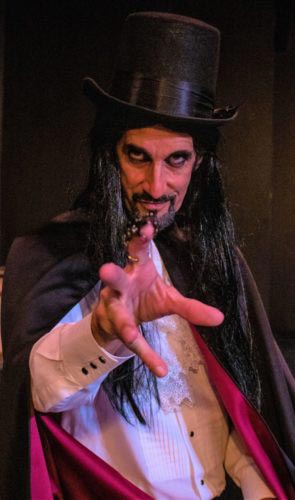 Since the 15th century the name of Vlad Dracul has inspired dread in the hearts of Romanians and the terror based on numerous legends spread. The largely imaginary Vlad the Impaler became ingrained as an instrument of fear throughout the world.  Since 1897 when Bram Stoker published his Gothic novel ‘Dracula’ vampires have reigned supreme within nightmares bidden and unbidden, chilling souls from sole to crown.  Gary Wright’s play “Dracula” premiered in 1999 and is quite true to Stoker’s original novel.  Caprice Sorg directs ‘Dracula’ with an amazing and intimate perspective that reaches out to the audience in an almost terrifying way.  The fourth wall is never broken in “Dracula” but it becomes more malleable in her capable directing hands.

The set design from Sorg with the assistance of cast and crew members is simple, focusing on memories that haunt our dreams rather than a series of complicated and gray structures. The impressive cast also recreates the dreary atmosphere of Transylvania and as the location moves to a foggy London the oppressive weight is quite apropos.

A down to earth English solicitor, Jonathon Harker must leave his wife, Mina, to journey to the foreboding castle of a new client, Count Dracula, to complete a real estate transaction.  At first he is at ease and treated well although he is somewhat mystified at the lack of creature comforts.   Just after his arrival he shows a picture of his beloved wife to Count Dracula who seems quite taken with her visage. Casually Harker invites the Count to his home for dinner when he comes to England.  Soon after arriving the situation for Solicitor Harker becomes dire. Ultimately he becomes a prisoner of the evil Count and barely escapes the dreadful castle. Making his way back to London he discovers the Count has already arrived at his new ‘digs’ to prey upon unsuspecting Londoners.  Lord and Lucy Holmwood who are close friends of the Harker’s become his first victims as the Count chooses Lucy as a recipient of his lust.  Bloodlust. When Lucy first becomes ill, their physician, Dr. Thomas Seward calls in the Netherlander, Abraham Van Helsing to consult. 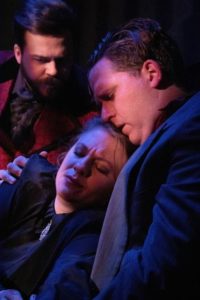 Amandanell Bold as Mina Harker in the arms of her husband, Keegan Zinnerman as Jonathon Harker while David Watson as Dr. Thomas Seward looks on. Photo Courtesy of Sami Karbelk.

The lovely Mrs. Jonathon Harker (Mina) has provided charitable visits to the unfortunate, including a Marcus Renfield who is quite mad.  He is also discovered to be a dedicated but un-willing henchman of the Count and must do his bidding.  He is as taken with Mina Harker as is the Count.  With Count Dracula’s arrival in London, a sinister pall falls over the friends beginning with Lucy Holmwood’s victimization.  Without the wisdom of Van Helsing, all would be lost.

Don Taylor stars as Dracula, the count of bloody flavors, the vampire of all bad dreams personified in his performance.  An actor well-known for his versatility Taylor seems as if he was born to play the father of all vampires using to great advantage a seductive leer along with a gluttonous greed for blood. His sinister demeanor is frightening and at the same time believably yet unbelievably natural.

Only an innocent man would not be afraid…at first.  Jonathon Harker is that innocent man played by Keegan Zimmerman with a typically British sense of humor and honor.  As he discovers the Count’s true proclivities his English bravery replaces his English complacence, and Zimmerman makes quite the transition.  Returning to London we meet the lovely and gently genteel Mina Harker whose compassion is great.  Amandanell Bold brings to life a genuine lady, although not a stereotypical one, but a true example of nobility.  In the midst of great danger, she retains her elegant calm demeanor without losing her passion.

The Harker’s friends are the young Lord Holmwood and his beautiful bride, Lucy.  Lucy and Mina’s friendship is strong, and when Lucy becomes ill, the Harker’s react as friends.  Lord Holmwood seems quite the stuffed shirt with all the conviction of the young in his English perception of the world.  The two are charming as a couple.  Malachi Campbell performs as Lord Holmwood with sterling detail, a stiff upper lip and surprising graciousness.  Megan Rich is the beautiful young Lucy Holmwood, and she plays Lucy with a definite richness all her own.  The character is round, complex and interesting rather than just another beautiful girl.

It is interesting that not only are Zimmerman and Bold perfectly cast as an ideal loving couple, but that Campbell and Rich are also ideally cast as well-suited to one another.  Even more interesting is the dynamic between the two men and the friendship between the two women.   It is the uniquely detailed and comprehensive direction by Sorg that gives the actors the time and strength to bring this degree of depth to the characters. 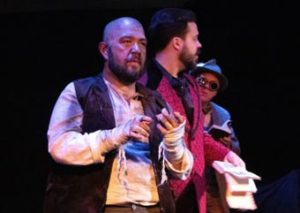 David Watson plays Dr. Thomas Seward, with just a hint of the pomposity seen in medical men of the 20th century while retaining a grand dose of humility from physicians of the 19th century.  He is able to command the respect of both Holmwood and Harker with ease, even as he introduces a foreign concept for consideration.

The foreign concept is in the form of Professor Abraham Van Helsing, a Netherlander who has become an expert on the strange and unique incidence of vampirism, and has dedicated his career and life to hunting down his arch enemy-Count Dracula.  David Fletcher-Hall plays Van Helsing with a great deal of humor and humility, charisma and eccentricity. Typically English, Holmwood and Harker cannot believe in vampires, but Van Helsing reveals the truth with dramatic and Teutonic wit.  Fletcher-Hall balances the preposterous with the brilliant creating a realistic character with Van Helsing eventually disarming the staid Englishmen with conviction and faith.

Kyler Lanning is Andrei/Jimmy.  These children are both terrified of Dracula and terrorized by him.  One scamp is in Transylvania and the other urchin is in London.  Similar roles, yet Lanning is able to differentiate in ways quite subtle as well as the obvious language.  Lanning is a veteran of many productions and has quite a future as an actor of note.

All of these performers do an excellent job impressing the audience and telling Bram Stoker’s original story as clearly as playwright Gary Wright intended with this excellent script.  And yet the most striking performance is manifested by Jon Haque as the character of Marcus Renfield, victim turned henchman of Dracula.  Haque is not only convincing; he is the most frightening as well as pitiable character in the show. He plays Renfield with utter disregard for personal comfort, yet seems very comfortable in the skin of a man driven mad by impossible, implacable evil.  Haque’s performance is exceptionally chilling and masterful.

“Dracula” runs from October 10, through October 27, 2019.  The 3rd Act Theatre Company is here to stay: “The Lost Boy” is not just beginners luck and with “Dracula” under their belt this new theatre company is a force to be reckoned with.  The choice of Caprice Sorg to direct the second show is certainly an intelligent and exciting move.  Sorg has cast Elizabeth Garrison as understudy for the role of Van Helsing and she will be doing the part the final weekend of the show.  While Fletcher-Hall will certainly be missed, Garrison should create a fascinating experience for theatre patrons. 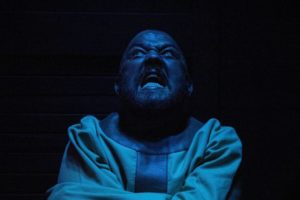 The 3rd Act Theatre Company is located inside the Shoppes at Northpark at 12040 N. May Avenue. For tickets and further information about “Dracula” and upcoming shows visit www.3rdActTheatreCo.com and check out their Facebook page, https://www.facebook.com/3rdActTheatreCo/.  “Dracula” is colossal and raw; fans of vampires will not be disappointed.

Blood is Still Wonderful the Second Time Around

The hit show “Dracula” at 3rd Act Theatre has taken a daring step although some may consider it a miss-step.  David Fletcher-Hall gave us a brilliant Van Helsing, but was unable to perform the final weekend.  Cast in the role of Van Helsing for performances from October 24 through October 27 is Elizabeth Garrison.   Fletcher-Hall is a hard act to follow, but Garrison gives it her best, only hampered by the particular circumstances of the show.

Under Caprice Sorg’s excellent direction Garrison plays the role exactly as the character is written.  No accommodation is made  changing the character to an Abby or Abigail Van Helsing or simply a Mrs. Van Helsing.  The result is a woman dressed as a man, speaking as a man, responding like a man.   The character calls for an avuncular approach toward the women being treated.  Garrison is not an ultra-feminine woman with lacy frills, bows and bangles, she has the aura of a tomboy; like Jo March in “Little Women” but she is undeniably a woman and she looks like a woman.  Some audience members are bothered, not by the idea of a woman playing a man’s part, but by encountering a situation that is not explained.  As a result the audience expects a reason for her to be a male figure and none is forthcoming.  This tends to jerk an audience out of the story, losing their subjective immersion in the tale. “Dracula” is a suspenseful thriller, certainly not a who-done-it and the question that arises with the use of Garrison in the part alters the perception of the play.  The idea seems appropriate and Garrison does a fine job with the role, but the question raised creates an unexpected loss of focus for the audience.

Don Taylor’s Dracula is a bit more menacing with just a hint of amusement at the pain he causes his poor unfortunate victims.  Jon Haque’s  Marcus Renfield is possibly even more frightening.  Keegan Zimmerman and Amandanell Bold seem even more in love as the newlyweds.   Malachi Campbell and Megan Rich are still delightful as the young aristocratic couple.  David Watson is the perfect physician; keeping a professional distance from his patients.  Kyler Lanning has grown markedly in his roles as Andrei and then Jimmy.  The entire cast works together very well  welcoming Garrison into the fold without reservation.

“Dracula” plays through October 27, 2019 at the Shoppes at Northpark Mall located at 12040 N. May Avenue (just south of the intersection of May and 122nd on May Avenue).   For tickets and further information about “Dracula” and upcoming shows visit www.3rdActTheatreCo.com.