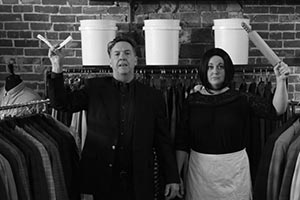 Town and Gown Theatre in Stillwater is opening its 69th season with Sweeney Todd: The Demon Barber of Fleet Street. Sweeney Todd is as memorable as it is gruesome. When Sweeney returns to Victorian London, he’s on a mission of revenge against those who wronged him, particularly an evil judge who banished him to Australia. Framed and disgraced, he sets his plan for vengeance into motion when he opens a barber shop just above Mrs. Lovett’s pie bakery. Barber shops and pie bakeries in London sound about as dashing and innocuous as you can get, but this story defines the very notion of barbaric and macabre. Sweeney Todd is nothing short of devious, demonic, and of course, delicious.

The Tony Award winning play was written by Hugh Wheeler and features unforgettable music by Stephen Sondheim. The 2007 movie by the creepy and fantastic Tim Burton starred Johnny Depp as Sweeney Todd and the late Alan Rickman as The Judge. Says production director Gavin Drew, “Sweeney Todd holds the place in my heart as the perfectly written musical. It has a bit of everything; it’s scary and chilling, it’s dramatic and funny. It has been enjoyed by adult audiences all over the world, and I believe it’s time we breathe a second life into it. With our new staging of this horror classic, we re-evaluated the core of this show and found that revenge is a dish best served… in a delicious pie.” 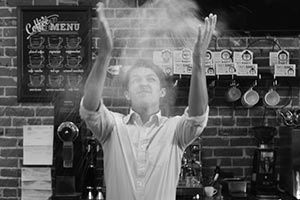 Ziegler, Martin, Day and Norman were recently seen at Town & Gown in their production of The Drowsy Chaperone. Ziegler also starred as Annie Oakley in Annie Get Your Gun, alongside Brock. Martin and Day were also seen in T&G’s Frost/Nixon. Stanphill is recognizable to T&G audiences for her roles in Death Trap, It’s a Wonderful Life: A Live Radio Play, and Steel Magnolias. Gavin Guthrie has been seen at Town and Gown in Into the Woods and in several productions with Lyric Theatre of Oklahoma. Billings has also been seen in Annie Get Your Gun and Steel Magnolias. Ambrosini is making his Town and Gown Theatre debut.

Sweeney Todd runs September 19th-29th at Town and Gown Theatre, located at 3524 S. Perkins Road in Stillwater. Performances are at 7:30 p.m. Thursday through Saturday, with 2:30 matinees on Sundays. Tickets are available via the website, townandgown.org, or by calling the box office, (405) 372-9122.