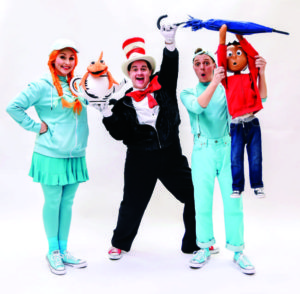 Lexi Windsor as Fish, Josiah Brooks as The Cat in the Hat, and Eli Bradley as The Boy. photo by K. Talley Photography.

Lyric Theatre of Oklahoma produces high-quality, entertaining theatre for the whole family. Their Theatre for Young Audiences (TYA) series offers exciting, professional theatre for the youngest patrons, and it’s always enjoyable for their parents too. Children are just as deserving of memorable theatrical experiences as their adult counterparts, and the Lyric’s TYA is sure to spark a lifelong love of live theatre for all who attend.

Kicking off 2020 is the latest in Lyric’s TYA series, Dr. Seuss’s The Cat in the Hat. Having been called one of Dr. Seuss’s “most beloved tales”, The Cat in the Hat is classic Seuss with all its whimsy, magic, and colorful imagery. A bright stage, vibrant characters, an exciting troupe of puppets, and the full text of the treasured children’s book await patrons at Lyric’s Plaza location. Lyric Theatre is producing the play in collaboration with Maryland’s Adventure Theatre MTC.

Kaleb Michael Bruza plays “Thing 2” and was gracious enough to take time out of rehearsals to answer some questions about the show! Read our exclusive Q&A below:

OKASH: Tell us about The Cat in the Hat! What are you excited for patrons young and old to experience?

Bruza: Boiled down, The Cat in the Hat is really just about the lengths children will go to entertain themselves on a cold, rainy day. Even as an adult, one might look around the house and think there’s absolutely nothing that sounds worth doing. Luckily for the kids in the show, a whimsical, possibly magical, talking cat shows up to save them from boredom! 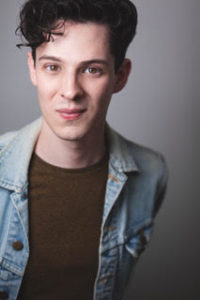 Kaleb Michael Bruza is the actor/puppeteer who plays Thing 2 in The Cat in the Hat. Photo by Adriana Tomeu.

This is one of those productions that certainly leans more towards being an “experience” than being a “play”. Chances are, every audience member, regardless of age, has enjoyed this book at some point in their lives. We have worked very hard to bring that Seussian, cartoon quality out of the book and onto the stage. There are aspects of Seuss stories that defy physics, logic, and would never happen in the real world, but we actually make them happen!

OKASH: What do you think is so important about offering quality theatre programs for kids and their parents to enjoy together?

Bruza: So often it seems that media or content creators think that it’s acceptable to “cut corners” when creating for children, as though children will accept a lower quality than older folks. In my experience working in a special needs classroom, performing as a professional clown for two years, and touring with Dallas Children’s Theatre, when you treat children just like any other patron, they appreciate it all the more and you will better keep their attention. Children are a very forgiving audience, but they’re much more difficult to win over in the beginning. And as with anyone, you’re much more likely to win them over if you meet them on their level, rather than talking down to them. It is very easy to come across as condescending to a child if you try to “dumb things down” for them. And when PARENTS have to sit through that? Oof.

OKASH: Dr. Seuss is known for being whimsical and imaginative. How does this stage production do his work justice?

Bruza: First of all, set designer Matthew Buttrey has completely captured the heart and soul of Seuss illustrations, aided in equal contribution by puppet and prop designer Dre Moore. The rake in our show IS the rake in the book. The sconces on our walls ARE the sconces in the book. Director Matthew Sipress keeps a copy of the book on hand to set certain vignettes, say the Cat’s initial entrance, to perfectly recreate the moments we’ve seen on the page time and time again. The entire show is set to the music of Henry Mancini (Composer of The Pink Panther Theme, Moon River, & The Peter Gunn Theme), adding an extra layer of funk and whimsy to the frenetic action onstage.

OKASH: How has the unique aspect of working with puppets for this show, which is being called a “puppet ballet”, been interesting and challenging?

Bruza: This show has been unlike anything I have ever worked before. It is more of a movement piece than anything else. The script is marked with counts (think: “5-6-7-8”) from start to finish. Because much of the story in our production is narrated by NPR’s Ari Shapiro, there is very little dialogue to go off of, and our actions are taken solely from those counts. It has not been unusual to hear a bit of direction to the effect of “on the fifth count of the eleventh set of eight, do this.” We change meter throughout several times, so we might go from an 8-count to a 6-count to a set of silent 2-counts without music. This, I think, is where the “ballet” description came in.

And then, yes. The PUPPETS! It’s truly the smartest way to do this show. Puppets can get away with a lot more than we, as performers, ever could. They can leap through the air and never tire. They can carry out certain cartoon physics that are impossible for a living being. But then, of course, there are hurdles to overcome, such as figuring out how to hold a prop to look as though the puppet is carrying it while also puppeteering said puppet, or doing your best to keep your own physical body out of the way so that it can be seen. These are really only mechanical challenges that we’ve ironed out fairly quickly in the rehearsal process, but will continue to fine-tune until opening. In the end, the puppets have allowed for a greater sense of play and exploration that drives, and can also be found within, the story of The Cat in the Hat. 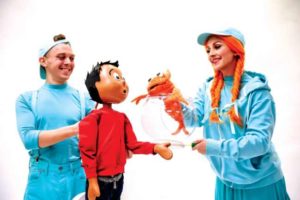 The Cat in the Hat also stars Josiah Brooks as Cat, Eli Bradley as Boy, Kalyn Glover as Sally, Lexi Windsor as Fish, and Katelyn Curtin as Thing One. Jonah White is the Swing for Cat, Fish, Boy, Thing 1, and Thing 2. Erin Thompson is the Understudy for Sally.

Lyric’s The Cat in the Hat is directed and choreographed by Adam Immerwahr, with additional direction by John Sygar and Matthew Sipress. Lighting design is by Alberto Segarra, set design is by Matthew Buttrey, and sound design is by Evan Cook. Costumes are designed by Danielle Preston. Laurena Sherrill is stage manager, and Andrea Moore is puppetry designer.

The Cat in the Hat runs January 23rd – February 9th, 2020 at Lyric’s Plaza Theatre. The play features all daytime performances, including select Sensory Friendly and American Sign Language interpreted performances. For tickets, visit lyrictheatreokc.com or call the box office at 405-524-9312.