“Sherlock Holmes” Proves to be a Great Escape! 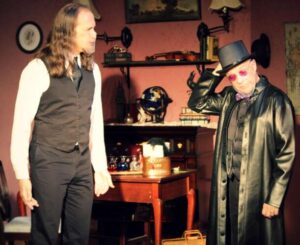 Sherlock Holmes is one of the most loved as well as respected characters because of his wit as much as his brilliant intellect.  That wit comes from the breast of Dr. John Watson and from the brain of author Sir Arthur Conan Doyle.  The character is fascinating and timeless, and part of that fascination comes from new interpretations, new readers and their take on the genius detective.

Playwright Tim Kelly is one of the visionaries responsible for adapting the works of Doyle. The play “Sherlock Holmes” is one of his incredibly versatile and melodramatic plays.  The story is, of course, the all- consuming rivalry between Holmes and arch-enemy, Professor Moriarty.  Kelly concentrates on the humor highlighting the popularity of melodrama and the cerebral drollness that is a natural result.  Director Don Taylor ensures that his cast of exciting actors play that humor to the hilt.  The wit is knifelike from incision to funny-bone.  When actors perform well, a show can be a delight.  When actors overact in this vein the result brings delightful titters that circle the auditorium, and the cast of “Sherlock Holmes” at 3rd Act Theatre accomplishes this easily.  Further, when it is obvious that the actors are having fun, the play is far more enjoyable for the audience and these actors have a great time. 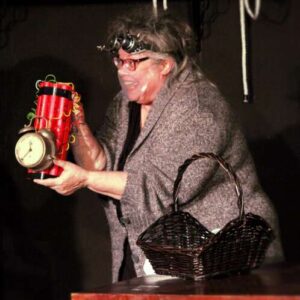 Taylor’s direction is excellent, possibly from his experience in portraying Sherlock Holmes himself.  Visually, he is a perfect Sherlock Holmes but he is not the only one.  Peter Fischaber is another perfect choice for the great detective. He has immersed himself in the humor by capitalizing on expression, rather than the familiar dead-pan approach.  His humor is expansive yet singularly delicate.  Moriarty is played by David-Fletcher Hall, and his evil persona is distinctively impossible yet impossibly true.  Dr. Watson is played as a rather silly man by Kelly Baum bringing a great deal of jocularity to the role.  These three men carry the show and each man is completely different yet each actor reveals the shared personal trait that is the intelligent foundation of Sherlock Holmes characters—supremely over-the top vanity.

Reed Bentley plays three characters differently yet with the same degree of hilarity. They are James Larabee, Prince Carl and a Gentleman. Holly McNatt is the exceptionally bright client in distress and also the sweet young thing.  McNatt also excels as the Flower Woman wafting her wares with noxious overtones.  Caprice Sorg is the warm and delightful Mrs. Hudson and also the evil criminal known as Gertie.  Lana Henson is very Victorian as Lady Edwina as well as the Larabee’s maid, Teresa and Pepper the suffragette with a hidden agenda.  Pallas Johnson is Madge Larabee and turns on a dime to become Mrs. Bassick.  Kendra Michal Johnson is delightful as Moriarty’s assistant Joan and gingerly Ginger as well as a matchgirl.   Joe Burleigh is magnificently bumbling as safe-cracker Sid Prince as well as the Inspector Lestrade unintentionally highlighting the brilliance of Sherlock Holmes.

Taylor’s expert direction is enhanced by the efficiency of Christine Jolly, Stage Manager and an excellent crew.  Cast and crew together embody the best of community theatre and the result is a very smooth performance.  “Sherlock Holmes” at 3rd Act gives the gift of an entertaining and fun evening allowing a few hours respite from the cares of the world. 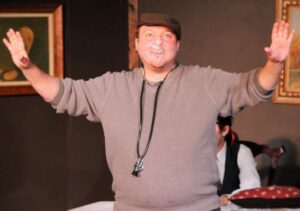 “Sherlock Holmes” runs Friday April 8th through Saturday, April 23, 2022.  Curtain is 8:00 pm evenings with a 2:30 Sunday matinee.  For further information and tickets visit info@3rdacttheatreco.com or call 405-593-8093.  3rd Act Theatre is located in the Shoppes at North Park Mall at 12040 N. May Avenue (122nd and May) in Oklahoma City.  There are numerous tasty restaurants in the vicinity providing the option of an evening on the town with dinner and a show!