Sensitivity and Talented Performances in “The Library” at Carpenter Square 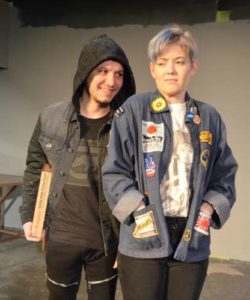 When Marshall, a former student at Mountain Valley High, unexpectedly shows up at Caitlin’s house acting strangely, she cannot help but be disturbed by him. Pictured are Ford Filson and Sara Byerly in the scene from “The Library” Photo courtesy of Rhonda Clark

Carpenter Square is presenting “The Library” under the expert direction of Terry Veal.  Veal does an excellent job of interpreting the show’s message. “The Library” is the 2014 play by noted screenwriter Scott Z. Burns, who adapted numerous Ludlum books to screen.  “The Library” is his first stage play and an interesting tale about the aftermath of a high school shooting and the illusions that impact grieving survivors, and the desperate need to assign blame as part of their grieving process.  As a result, illusions become lies and lies that are embraced by the media and the public have devastating consequences.

Caitlin Gabriel was on her way to the school library with her best friends Brittany and Laura.  Brittany left to walk with her boyfriend, and Laura and Caitlin study.  Suddenly they are interrupted by a mass shooter who has entered the school determined to kill as many as possible. Caitlin is terribly injured by the shooter and her friend, Laura doesn’t survive.  Several students and their teacher are found by the shooter, hiding in the A/V closet.  They are all killed.  In the library with Caitlin and Laura is Joy Sheridan who leads several students in prayer.  Also there is an uninjured survivor, Ryan Mayes, waiting for his brother, who lies dying in the hall outside the library door.

Caitlin wakes up in the hospital to learn that Laura has died along with many others.  There are a total of 13 casualties and many injured like Caitlin.  The grieving parents and friends including Dawn Sheridan, a very religious woman who seeks solace for the loss of her daughter, hold vigils.  Ryan Mayes has come forward with information that Caitlin told the shooter, Marshall Bauer, about those hiding in the Audio-Visual (A/V) closet.  Caitlin must endure her injuries alone, as a pariah, because everyone believes the story of Ryan Mayes.  Dawn Sheridan meets with a publisher about the book she is writing to share the story of her daughter, Joy, who died a hero. 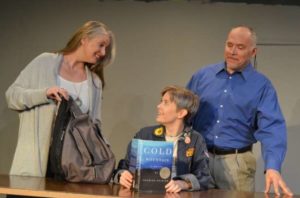 The Gabriels try to cheer up their daughter Caitlin with a new backpack after hers was ruined in a shooting at her school. Pictured left to right are Denise Hughes, Sara Byerly, and Grant Brittan

The story is heartbreaking, Caitlin cannot make anyone including her parents believe her.  Everyone tells her that her betrayal of the hiding victims is understandable, even Joy Sheridan’s mother, Dawn forgives her.  Caitlin tries to tell her story but must wait on the delayed police report that she hopes will vindicate her.  Her friend Brittany will not return her calls, so she pins a great deal on this police report, but even the police investigator seems to be convinced of her guilt.

With Caitlin being blamed for the death of those in the closet she is vilified by the media and further blamed by the mother of Joy, Dawn Sheridan.  Mrs. Sheridan in her grief writes a book of her daughter’s journey as Joy led the other students in prayer.  In the six months that follow, Mrs. Sheridan has a lucrative book deal, and there are many memorials to her hero daughter.

Caitlin is recovering from her traumatic injuries, but unable to recover from being shunned.  No one believes her; even her parents believe that she told the shooter where the hidden students and teacher were located.  Brittany isn’t allowed to speak to her.  Everyone is looking for an answer and assigning blame to the shooter isn’t satisfactory; he is already dead.

This story is about memory, about how memory and false memory can alter the truth.  The question is whose memories are false?  Almost impossible to answer this question, at least without the police report.

Veal does a superb job of directing this cast in the very sensitive subject matter of the play.  Caitlin Gabriel is a victim twice over and her journey is heart-wrenchingly portrayed by Sara Byerly.  Byerly is a recent graduate of Oklahoma City University, a school rich with success in theatre and all performing arts.  Byerly has the foundation to create a very complicated character with ease and understanding that makes her a phenomenally excellent choice for the role. 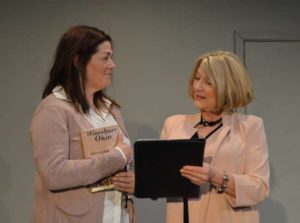 Dawn, a mother of one of the victims of a school shooting, meets with a publisher to discuss a book and movie deal about the incident. Alexandra Shadid is pictured at left with Cindy Barrios in a scene from Scott Z. Burns’ drama “The Library,” Photo courtesy of Rhonda Clark, Carpenter Square

Dawn Sheridan is played by Alexandra Shadid with great resilience and skill.  One sees in her a genuine need to remember her daughter’s beauty, grace and heroism.  It is a comfort to her that her daughter, Joy, was leading everyone in prayer at the time of her death.  Nevertheless she is delighted to be enriched by the tale as she begins a book to remember the hero daughter she lost; Shadid shows us both the genuine and the hypocritical side of Dawn Sheridan with great skill and understanding.

Denise Hughes as Caitlin’s mother, Elizabeth Gabriel and Grant Brittan as Nolan Gabriel are very convincing as the supportive but estranged parents of Caitlin.  They are intent on supporting her and quick to understand their daughter is innocent in any wrong-doing when she revealed the hiding place.  In supporting their daughter they make the classic mistake parents often make.  Because they understand the importance of their daughter’s survival, they never hesitate to believe in her fundamental guilt.  They wish to protect her rather than defend her.  This complicated emotional base, impacted on their need to unite in spite of their estrangement is very hard to portray, but easily done with Hughes and Brittan at the helm. 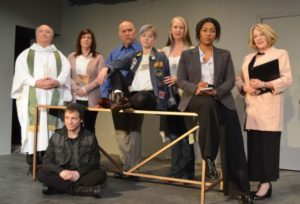 John Covaleskie plays two characters distinctly and with distinction.  Father Dunstan, sympathetic to Caitlin, but nevertheless assuming her shame. Covaleskie is then Special Master Thornton who is militarily precise, but factually imprecise.

Ford Filson is Ryan Mayes and makes a brief appearance of a hooded Marshall Bauer, the shooter.  Filson handles the role of a youth whose memory is consumed with the loss of his brother with pathos.  He had arranged that his brother should meet him in the library to get the car keys.  His brother had a dental appointment. 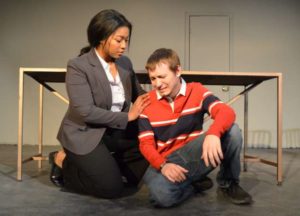 Ryan, a high school senior(Ford Filson), breaks down in front of Detective Washburn (Aiesha Watley) when he realizes that he wrongly accused someone of helping the gunman who opened fire on his classmates. Photo courtesy of Rhonda Clark Carpenter Square

Aiesha Watley is the detective leading the investigations.  She interviews the students and we see her attempts to have Caitlin reconsider her story.  She is unable to punch any holes in Caitlin’s story, but her assumption is the assumption of a trained police officer who suspects everyone.  She interviews Ryan Mayes in the same fashion.  Watley’s slightly surprised reaction is finely subtle excellent acting.

Cindy Barrios makes a cameo appearance as the publisher count.  She encourages Dawn Sheridan to write a book, downplaying the monetary gain while equating the financial boon to tell a story of hope in the hero who prayed as she was cut down in her youth.  That scene powerfully demonstrates how people automatically believe what they want to believe even without all the information to make a judgment.  It is the easier path.

Scott Z. Burns has chosen a controversially sensitive issue to drive home his point that memories can be faulty and jumping to a conclusion is like jumping over a cliff, only taking an innocent along for the ride.  Terry Veal is the ideal director to explore the complicated depths of emotion in such a  roller-coaster series of events.  He uses an excellent cast.

“The Library” is showing at Carpenter Square Theatre February 21 through March 14, 2020.  The location, 800 West Main has a Lobby and hallway featuring local Oklahoma artists and this production welcomes back Albert Bostick Jr. and Nana K. Hagan with the name Nananom Art.  These two artists reflect different generations of excellent art reflecting African roots and culture.  They are both dynamic artists and their work, displayed side by side makes a powerful statement of inclusion.  Showtime is 8:00, so come early to view the art, or take advantage of intermission to not miss this display.  For tickets and information visit www.carpentersquare.com or call the box office at 405-232-6500.  “The Library” is a thought-provoking and disturbing, yet somehow gentle play that serves to educate respectfully and should be seen for this reason.  It is also a very entertaining show abounding with excellent performances.