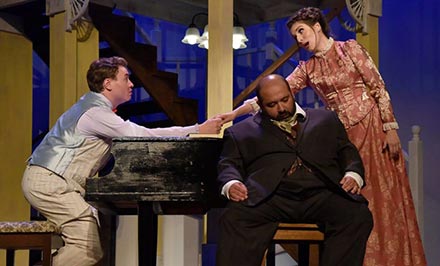 Painted Sky Opera presents “Il Barbiere di Siviglia” or “The Barber of Seville” by Gioachino Rossini from September 20, 2019 to September 27, 2019 at the Freede Theatre in the Oklahoma City Civic Center Music Hall.  Considered one of Rossini’s most popular comic opera’s, “The Barber of Seville” has been delighting audiences for over 100 years, and this version from Painted Sky hits the mark squarely.  Directed by Rob Glaubitz with musical direction by Jan McDaniel, the production is an engaging one from overture to final ‘Bravo!’ relying upon the excellent comic timing of the performers along with the magnificent vocals.  The libretto by Cesare Sterbini is preserved in essence but pared down to an unobtrusive English translation visible to the audience on screen without distraction.  This production is an example of masterful direction by Glaubitz along with perfect musical direction from McDaniel.  Both pay close attention to detail and are committed to creating a delightful operatic experience for the audience. 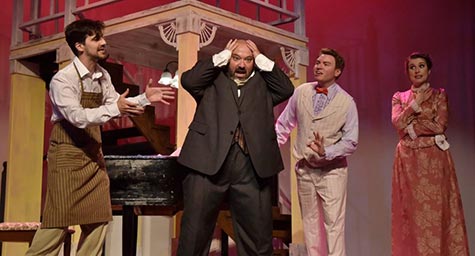 While opera relies on superb vocals to convey the story and emotions, the consistent characterizations and theatrical competence of the performers truly enhances the experience for patrons.  The story is a simple love story complicated by the devious approaches lovers take to impress the objects of their affections.  Count Almaviva is smitten by the beautiful Rosina and fearful that she will love him for his title and wealth rather than for himself, he pretends to be an impoverished student, Lindoro.  He meets Figaro, the barber whose talents include matchmaker and spy as well as stylist and surgeon.  Figaro has no sense of humility and a profound belief in his ability to overcome Rosina’s watchful guardian, Doctor Bartolo.  Doctor Bartolo believes in power and that he can bully the beautiful young Rosina into marriage.  Rosina’s music teacher, Don Basilio is a loyal friend to Bartolo, but clearly easily seduced by the lure of gold.  The play opens as Almaviva’s servant Fiorello sets the stage for the count to serenade Rosina in the guise of Lindoro.

Scott Hynes is technical director and his many talents are showcased by the beautiful and interesting set that gives the piece a flavor of elegance within the intelligent design.  Transitions are enhanced by the effective lighting Hynes is particularly noted for.  Coupled with the costuming from Dayna Brown the illusion of timelessness is created for the period piece with simplicity. 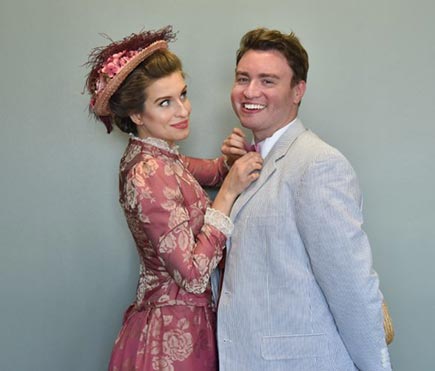 Opera is all about the music and all the performer’s superb vocals are enchanting.  Supported beautifully by the outstanding orchestra of twenty musicians the sounds soar throughout the auditorium delighting the audience.  The barber is played by Ben Edquist with distinctive flair.  Edquist makes the jack-of-all-trades character quite believable and the confident con-artist comes to life with humor and charm.  Edquist creates an irresistible Figaro with his elastic voice.  Isaac Frishman is the wealthy young count Almaviva and he is played with the ambiance of a playboy man-about-town and carefree fellow who is conquered by beauty.  Becoming the impecunious student Lindoro appears natural and comfortable for the smitten suitor and is handled by adroitly by Frishman with silky smoothness. Mary Beth Nelson is the beautiful and feisty but unsophisticated maiden determined to escape the bounds of marriage to the ridiculous but powerful Doctor Bartolo.  Nelson has an exceptionally vibrant and versatile voice displaying a lovely quality of tone musically as well as expressively. 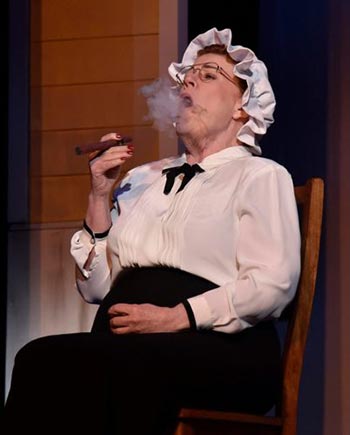 Barbara Fox DeMaio as Berta in “The Barber of Seville” enjoys a moment of freedom. Photo courtesy of Painted Sky Opera

Andy Papas plays Doctor Bartolo with considerable aplomb using his rich voice and superb timing to create a character both sinister and silly. Papas plays Bartolo for the first time for Painted Sky Opera Company but will do so again for Anchorage Opera later this fall.  He is well on his way to becoming the definitive Doctor Bartolo.  Rosina’s governess is Berta, more than a governess, she also runs the household.  Keeping a watchful eye on Rosina for the suspicious Bartolo, she is well aware of the inconsonant relationship shaking her head at the folly found in fondness based more on greed than lechery.  Berta is played by Barbara Fox DeMaio, Executive Director and co-founder of Painted Sky Opera.  DeMaio’s total commitment to excellence in performance is seen in her many accomplishments.  Her background includes musical theatre as well as opera and her talent as an actress is visible in this role.  With a mere shake of her head and arch of eyebrow the slightly crusty and self-serving Berta becomes a character hallowed for humor.  DeMaio takes advantage of each comic moment to punctuate her character as well as the story.  Her talent lies in combining incredible vocals with superb acting.

Jonathan Moots is Don Basilio, the music teacher whose loyalty to gold may be just a little greater than loyalty to friends.  Moots also has an expressive voice and a wide range of comic expressions making him a wonderful addition to the cast.  The triumph of avarice over loyalty is reflected on his face as well as in his voice putting the exclamation mark on this aspect of the  human condition.  Jordan Andrews has a great voice and wonderful demeanor as Fiorello.  As the servant of Almaviva, he may be the only servant with any degree of honor and loyalty as he works to arrange things for the Count.  Andrews listens to the others, listens to the ensemble as well as responding with vocal clarity.  Stephen Jones is the officer, an official easily bamboozled, but never overlooked.  The eleven ensemble players including Chorus and supernumeraries provide excellent support for the major cast members, as well as contributing beautiful vocals and comic moments of their own. 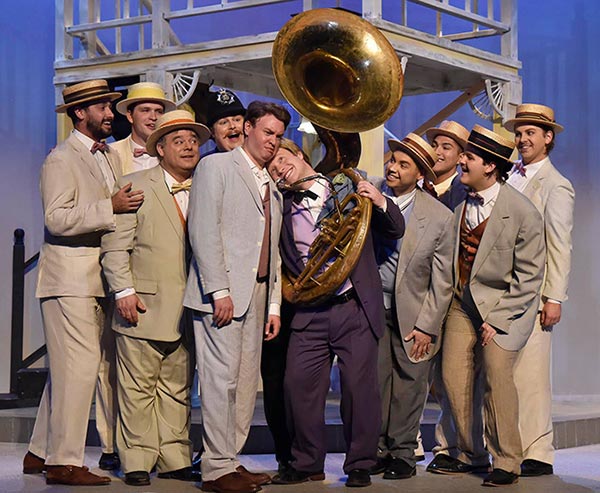 The excellence of “The Barber of Seville” is apparent in the quality of the performance, but also in the cooperation between orchestra and singers.  Respect for the art form is paramount and visible to all.  Opera is an art form that some patrons may find intimidating but this production from Painted Sky Opera is a great example of an art form elevated to entertain everyday patrons.  An example of their commitment is the outreach program for students.  Schools are welcome to bring students for a program that teaches and encourages participation in opera in many avenues.  It takes more than singing to make an opera great, and the dedication from all those who contribute is encouraged.  Students are shown the basics of all performance art as well as enjoying excerpts from the opera itself.  The cast, orchestra and crew participate whole heartedly in giving the operatic experience a greater understanding for young people and future audiences of opera, musical theatre, drama, comedy and dramedy, and every part of performance art that creates a miracle for someone.  This outreach is Tuesday, September 24 at the Freede Theatre.

For information about the in-schools programs and community programs or “The Barber of Seville” and upcoming season shows contact Painted Sky Opera through the website at www.paintedskyopera.org.  The final performance of “The Barber of Seville” takes place September 27, 2019 at the Freede Theatre at the Civic Center Music Hall at 201 N Walker Avenue in downtown Oklahoma City.  The box office number is 405-594-8300 for tickets and general information.  Curtain is 7:30 for an evening of high-falutin’ hilarity.